A bit back, I ran a wonderful post by Chris Corbally about the late Vera Rubin. We passed it on to Fr. George Coyne, the emeritus director of the Vatican Observatory, who knew Dr. Rubin very well, as the following story he passed on to us shows... 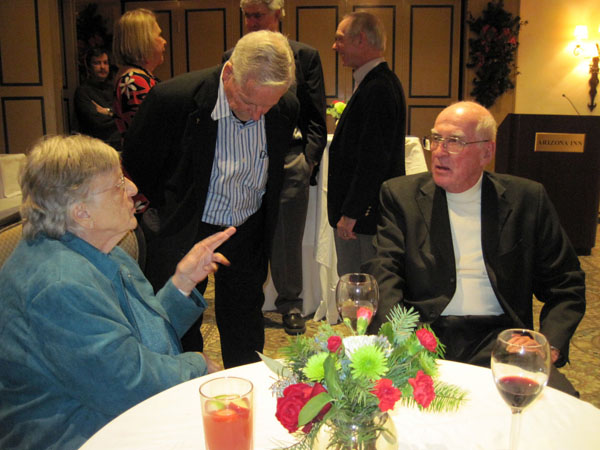 Chris has mentioned Vera’s “doggedness” in the pursuit of data in our search to understand the universe, a pursuit which led Vera to the detection of dark matter. I have experienced personally Vera’s “doggedness.”

She was an examiner on my Ph.D. dissertation oral exam at the Georgetown College Observatory. Trying to relax I walked up to the Observatory a bit early and quietly wandered around. What did I find about 30 minutes before my exam but Vera and Father Martin McCarthy busily examining books in a row of the library I had never visited.

What’s up? thought I!

After they departed, I darted in to find that they were checking out the spectrum of the Earth’s atmosphere. But my thesis was on the polarimetric properties of the moon’s surface in order to measure the nature and abundance of dust there. But, of course, the light from the moon had to pass through the earth’s atmosphere before I could analyze it. Could the Earth’s atmosphere have contaminated my findings? Sorry, Vera, but I never thought of that until now.

I panicked, and rapidly prepared an answer which had something to do with comparisons I had made between the direct spectrum of the Sun and that of the Moon which, of course, is reflected sunlight. Both spectra had to pass through the Earth’s atmosphere.

As expected, during the exam Vera raised the issue. I mumbled an answer which obviously revealed about 20 minutes of my deep thinking with very little data to show. “Doggedly” Vera complimented me on an intelligent  response which, she said: “Required a great deal more of data.”

Chris has also referred to Vera’s “passion for science.” True, indeed, but her passion showed itself primarily in her passion for people: students, colleagues, friends, and, above all, family.

Some years after the first summer school, to which Chris has referred, we hosted Vera and her husband Bob for several weeks of quiet research at the Vatican Observatory at Castel Gandolfo. Since several of the Observatory telescopes are located in the adjoining papal gardens, I, as director, had access to the gardens and welcomed Vera and Bob to take walks there, advising them to always wear their identity badges.

One day I received a report from the garden authorities that a young couple had been seen holding hands while strolling in the gardens and that they had been identified as guests of the Observatory. Holding hands in the papal gardens! I dutifully responded that I would check into the matter.

Vera and Bob assured me that they were wearing their badges. I asked no more. I estimate that this “young couple” were about 35 years married at that time and had seen four children through graduate studies in the sciences, including their daughter, Judy, an astronomer. Amazing what passion and holding hands will do!