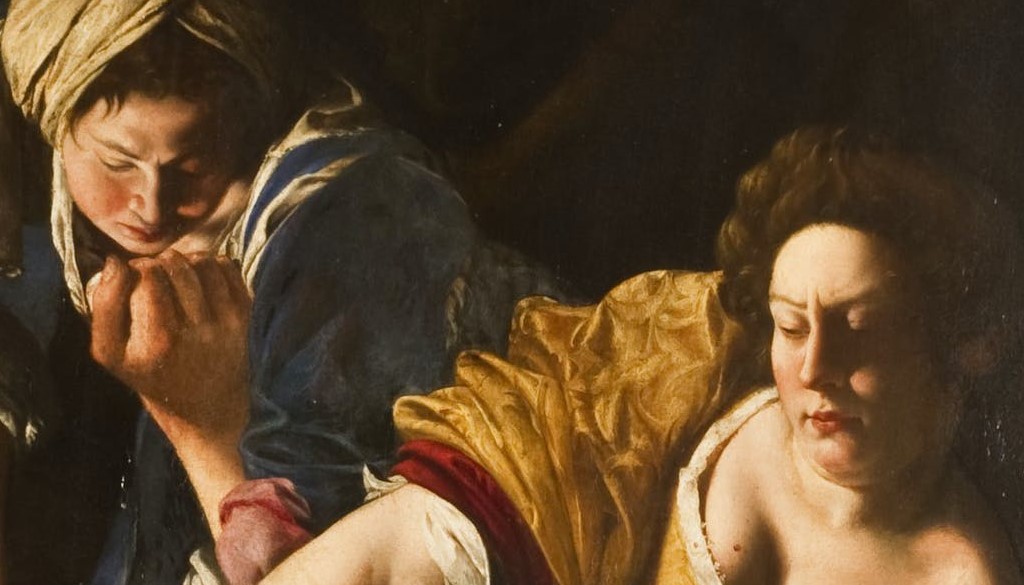 Conic sections—circles, ellipses, parabolas, and hyperbolas—are important in astronomy.  A comet moving through the gravitational field of the sun will follow an elliptical orbit if it is contained by the star’s gravitational field.  Johannes Kepler first figured that out.

Galileo was the one who first figured out the parabolic motion of projectiles launched near Earth’s surface, at around the same time that Kepler was figuring out elliptical orbits.  Some images from Galileo’s notebooks showing these parabolic trajectories are below.  These trajectories show up in an interesting place—in a gory painting about Judith from the Bible.

The Book of Judith tells the story of Holofernes, an Assyrian general who leads his army on a mission of conquest and plunder, seeking to subjugate all peoples who did not pay sufficient tribute to the empire of his king, Nebuchadnezzar.  He lays siege to a Hebrew city, Bethulia, cutting off their water supply.  Water is running out, and the leaders of the city are about to surrender, when Judith, a wealthy widow, declares that they are losing faith and wimping out, and that she will take some action, in the fashion of a secret agent.

Judith says her prayers and decides to schmooze her way into the Assyrian camp, in hopes that once she has infiltrated the camp an opportunity will arise.  She is exceptionally beautiful, and after she has polished herself up and put on all her finery, men are just sort of reduced to staring slack-jawed when she approaches.  Here is the heart of the action (Douay-Rheims translation—because it was available around the time of Galileo):

And they brought her to the tent of Holofernes, telling him of her.  And when she was come into his presence, forthwith Holofernes was caught by his eyes.  And his officers said to him: Who can despise the people of the Hebrews who have such beautiful women….

[S]he stood before his face.  And the heart of Holofernes was smitten, for he was burning with the desire of her.  And Holofernes said to her: Drink now, and sit down and be merry for thou hast found favour before me.  And Judith said: I will drink my lord, because my life is magnified this day above all my days.  And she took and ate and drank before him what her maid had prepared for her.  And Holofernes was made merry on her occasion, and drank exceeding much wine, so much as he had never drunk in his life.

And when it was grown late, his servants made haste to their lodgings, and [Holofernes’s eunuch] Vagao shut the chamber doors, and went his way.  And they were all overcharged with wine.  And Judith was alone in the chamber.  But Holofernes lay on his bed, fast asleep, being exceedingly drunk.

And Judith spoke to her maid to stand without before the chamber, and to watch:  And Judith stood before the bed praying with tears, and the motion of her lips in silence, Saying: Strengthen me, O Lord God of Israel, and in this hour look on the works of my hands, that as thou hast promised, thou mayst raise up Jerusalem thy city: and that I may bring to pass that which I have purposed, having a belief that it might be done by thee.

And when she had said this, she went to the pillar that was at his bed’s head, and loosed his sword that hung tied upon it.  And when she had drawn it out, she took him by the hair of his head, and said: Strengthen me, O Lord God, at this hour.  And she struck twice upon his neck, and cut off his head, and took off his canopy from the pillars, and rolled away his headless body.

And after a while she went out, and delivered the head of Holofernes to her maid, and bade her put it into her wallet.  And they two went out according to their custom, as it were to prayer, and they passed the camp, and having compassed the valley, they came to the gate of the city.  And Judith from afar off cried to the watchmen upon the walls: Open the gates for God is with us, who hath shewn his power in Israel.

Of course the Assyrians are shocked to find the head of their general on display atop the walls of Bethulia, and are dismayed and lacking leadership, and the Israelites attack and drive them off.

The story of Judith killing Holofernes was the subject of plenty of paintings, including two by Artemisia Gentileschi, who lived during the time of Galileo.  In around 1611 she did a painting of Judith and her maid killing Holofernes.  That’s the one on the left, below.  It is pretty gory.  She did another, very similar painting around 1620.  That is the one on the right.  It is even gorier, with lots of spurting blood spraying all over Judith.  It is now in the Gallery of the Statues and Paintings of the Uffizi.

According to the Uffizi,

The [1620] painting was completed in Rome where Artemisia returned after spending seven years in Florence…. The naturalistic “virility” of the work provoked strong reactions on its arrival in Florence and the painting was denied the honor of being exhibited in the Gallery; in fact, it was only with great difficulty and the help of her friend Galileo Galilei that the painter managed to extract the payment, with a significant delay, that had been agreed with Grand Duke Cosimo II de’ Medici, who died in 1621 shortly after the great canvas was completed. Today, this painting also represents the human and professional tale of a woman who chose to be an artist in an era dominated by men; in this she succeeded, working in the courts of Rome, Florence and Naples, traveling to England and finally becoming the first woman to enter the Academy of Art and Design in Florence.

It seems Galileo did more than help Artemisia to get paid.  He apparently taught her about projectile motion and parabolas.  Look closely at the 1620 painting—the spurting blood is following parabolic trajectories (the image below has been brightened and boosted in contrast).  Behold: conic sections in art!