“News is only the first rough draft of history.” –Alan Barth

Forty-five years ago, the Apollo 13 mission met with a disastrous explosion that threatened the lives of the three astronauts aboard, James Lovell, Fred Haise, and Jack Swigert. The intended lunar landing was abandoned, replaced with a determined struggle to fix problems, keep systems running, and keep the crew alive, while Apollo 13’s command and service module Odyssey, docked to its lunar module Aquarius, swung around the far side of the Moon and made its way back to Earth. 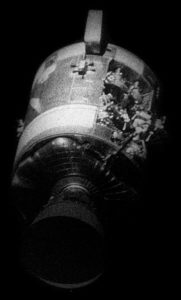 In the course of time, many books have examined the history of Apollo 13. Examples include Henry S. F. Cooper’s Thirteen: The Flight That Failed, Lost Moon (retitled Apollo 13) by James Lovell and Jeffrey Kluger, Apollo: The Race to the Moon by Catherine Bly Cox and Charles Murray, and A Man on the Moon by Andrew Chaikin. And there’s a great 1995 movie, Apollo 13, directed by Ron Howard.

But how did Apollo 13 look as it was happening?

A leading source of spaceflight journalism, Aviation Week and Space Technology, will be celebrating its 100th anniversary in 2016. To get into a centennial mood, the magazine is regularly posting excerpts from its past issues highlighting notable developments in aviation and spaceflight. One of them was Apollo 13.

Jim Asker offers a modern perspective on AvWeek‘s Apollo 13 coverage, and links to a pair of PDFs of the 1970 articles describing the spacecraft’s safe return: Part 1. Part 2.

If you care to, you can read about the dramatic flight the way people did in 1970.