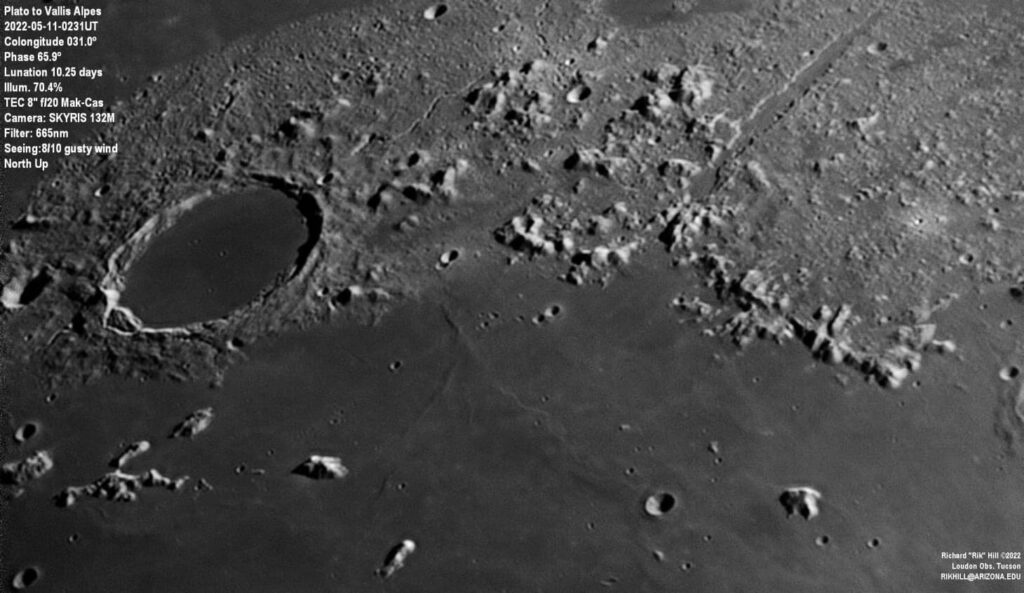 When on the terminator this region catches the attention of all lunar observers. I have imaged it many times at many librations. This was not a particularly favorable libration but many features were well shown in this image. First we have the large crater Plato (104km dia.) on the left side of this image with the dramatic collapse features on its west (left) wall and on the floor you can see 4 of the famed craterlets. To the right are “Plato Rilles” according to Wood in his Atlas of the Moon, but the LROC QuickMap and Virtual Moon Atlas shows them to be smaller rimae south of this. I have used the term Rima Plato to refer to the larger rille for years. Moving further right or east, we come to the magnificent Vallis Alpes at the bottom of which you can see the kilometer wide rima meandering it’s length.

In the lower right of this image is the impressive massif Mons Piton (alt. 2250m). There was a spectacular oblique view of this mountain taken by Apollo 15 orbiter (attached), looking north with the Montes Alpes in the distance. It is worth looking up. The crater to the left of this is Piazzi Smith (22km). Then moving further left is and unnamed mountain and farther, Mons Pico (2400m), every bit as impressive as Mons Piton. It was the subject of a famous drawing by the astronomer James Nasmyth (1874) and another Apollo 15 image (attached).

Lastly we have the Montes Teneriffe south of Plato to the left of Mons Pico, just the tops of gigantic mountains that were flooded by the Imbrium lavas. They are quite a sight in the early morning lunar light.