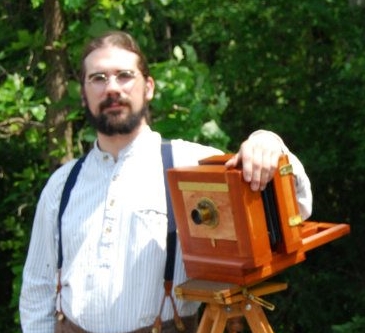 Chris Olsen has a degree in history, and is a student of 19th-century photography and science. Chris does daguerreotypes and wet plate collodion, which are the two first photographic processes that were commercially successful.

Chris works as an operator at Fermi National Accelerator Lab; this offers him the very special privilege of taking his camera equipment into the accelerator complex and using this 150-year-old process to take pictures of it. Chris also does backstage concert photography and takes pictures of Civil War reenactors. Chris uses his own 19th-century equipment, and gives these photographs to the Civil War reenactors as gifts.

Chris will be writing a series about 19th century solar observation, and recreating the instruments used during that period. Chris has started researching the English scientist and astronomer Norman Lockyer; during the next total solar eclipse, Chris hopes to “discover” the element helium using the spectrometer he built.