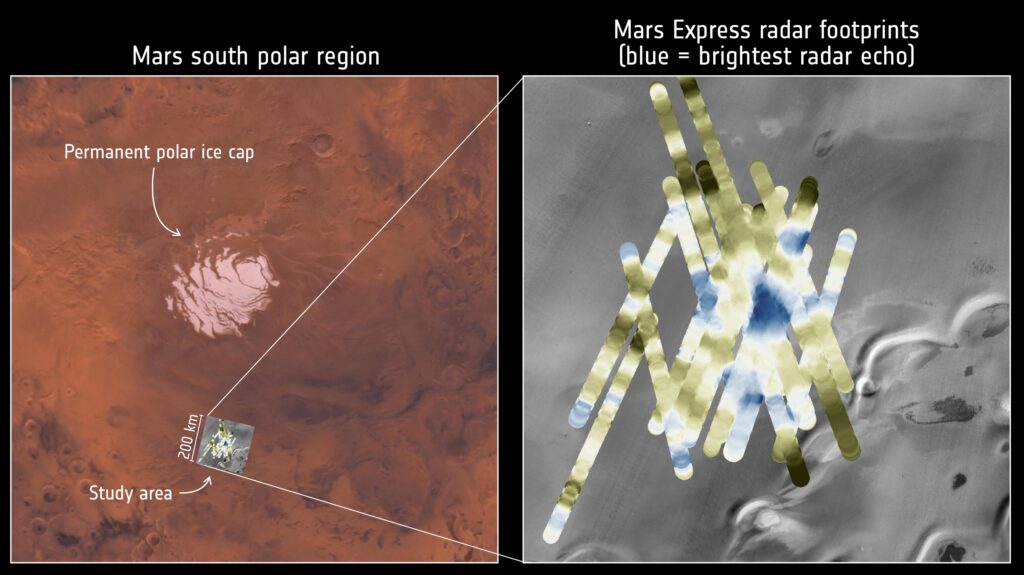 The European Space Agency’s Mars Express spacecraft has bounced radar signals through underground layers of ice and found evidence of a pond of water buried beneath Mars’ south polar cap.

The 200 km square study area is indicated in the left-hand image and the radar footprints on the surface are indicated in the middle image for multiple orbits. The greyscale background image is a Thermal Emission Imaging System image from NASA’s Mars Odyssey, and highlights the underlying topography: a mostly featureless plain with icy scarps in the lower right (south is up).
The footprints are colour-coded corresponding to the ‘power’ of the radar signal reflected from features below the surface. The large blue area close to the centre corresponds to the main radar-bright area, detected on many overlapping orbits of the spacecraft.
The brightest reflections are centred around 193°E/81°S in the intersecting orbits, outlining a well-defined, 20 km-wide zone. Credits: Context map: NASA/Viking; THEMIS background: NASA/JPL-Caltech/Arizona State University.

Observations of the Planum Australe region at Mars’ south pole were made between 2012 and 2015 using the Mars Advanced Radar for Subsurface and Ionosphere Sounding instrument (MARSIS); MARSIS is the first radar sounder ever to orbit another planet. Ground-penetrating radar works by sending pulses at the surface and timing how long the reflected signals take to return to the spacecraft, and measuring how strong those signals are. The properties of the material beneath the surface influence the returned signal; these data can be used to map the subsurface topography.

The MARIS investigation reveals that south polar region of Mars is made of many layers of ice and dust down to a depth of about 1.5 km in the region analyzed for this study.

“Analysing the properties of the reflected radar signals and considering the composition of the layered deposits and expected temperature profile below the surface, the scientists interpret the bright feature as an interface between the ice and a stable body of liquid water, which could be laden with salty, saturated sediments. For MARSIS to be able to detect such a patch of water, it would need to be at least several tens of centimetres thick.” ~ ESA 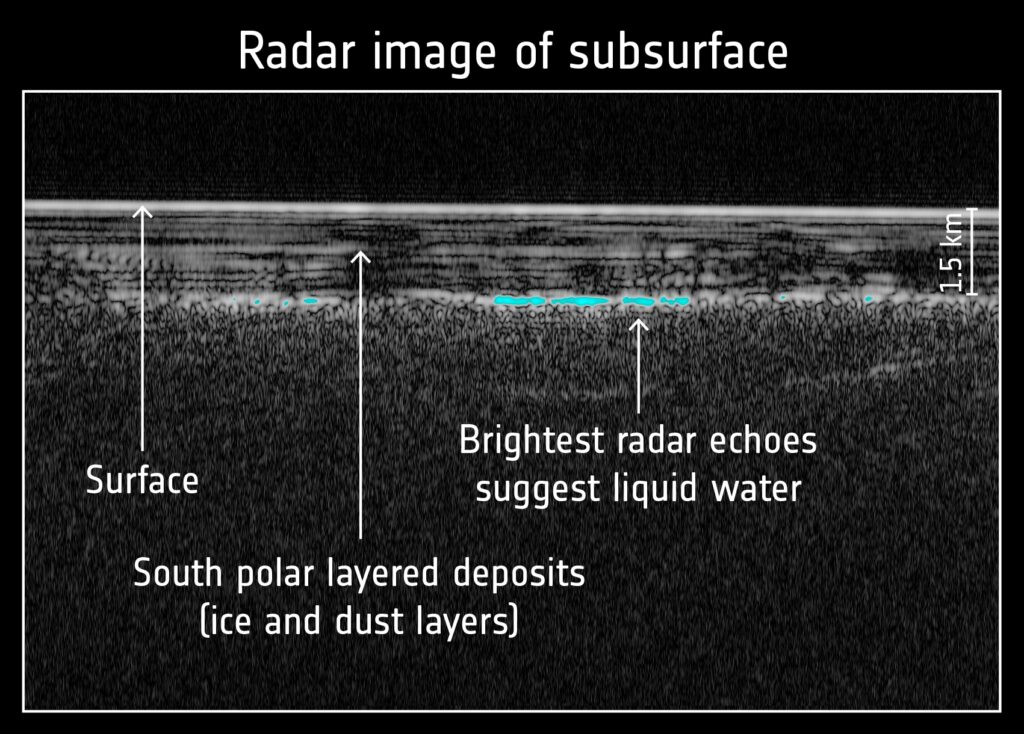 A subsurface radar profile of the Mars orbits; the bright horizontal feature at the top represents the icy surface of Mars in this region. The south polar layered deposits – layers of ice and dust – are seen to a depth of about 1.5 km. Below is a base layer that in some areas is even much brighter than the surface reflections, highlighted in blue, while in other places is rather diffuse. Analysing the details of the reflected signals from the base layer yields properties that correspond to liquid water. Credit: ESA/NASA/JPL/ASI/Univ. Rome; R. Orosei et al 2018

Over the past decade or so, evidence of water flowing on the surface of Mars in the distant past has been observed at several locations from orbit and from rovers on the surface; networks of dried-out river valleys, huge outflow channels, and minerals on the Martian surface that can only form in the presence of liquid water have been discovered. 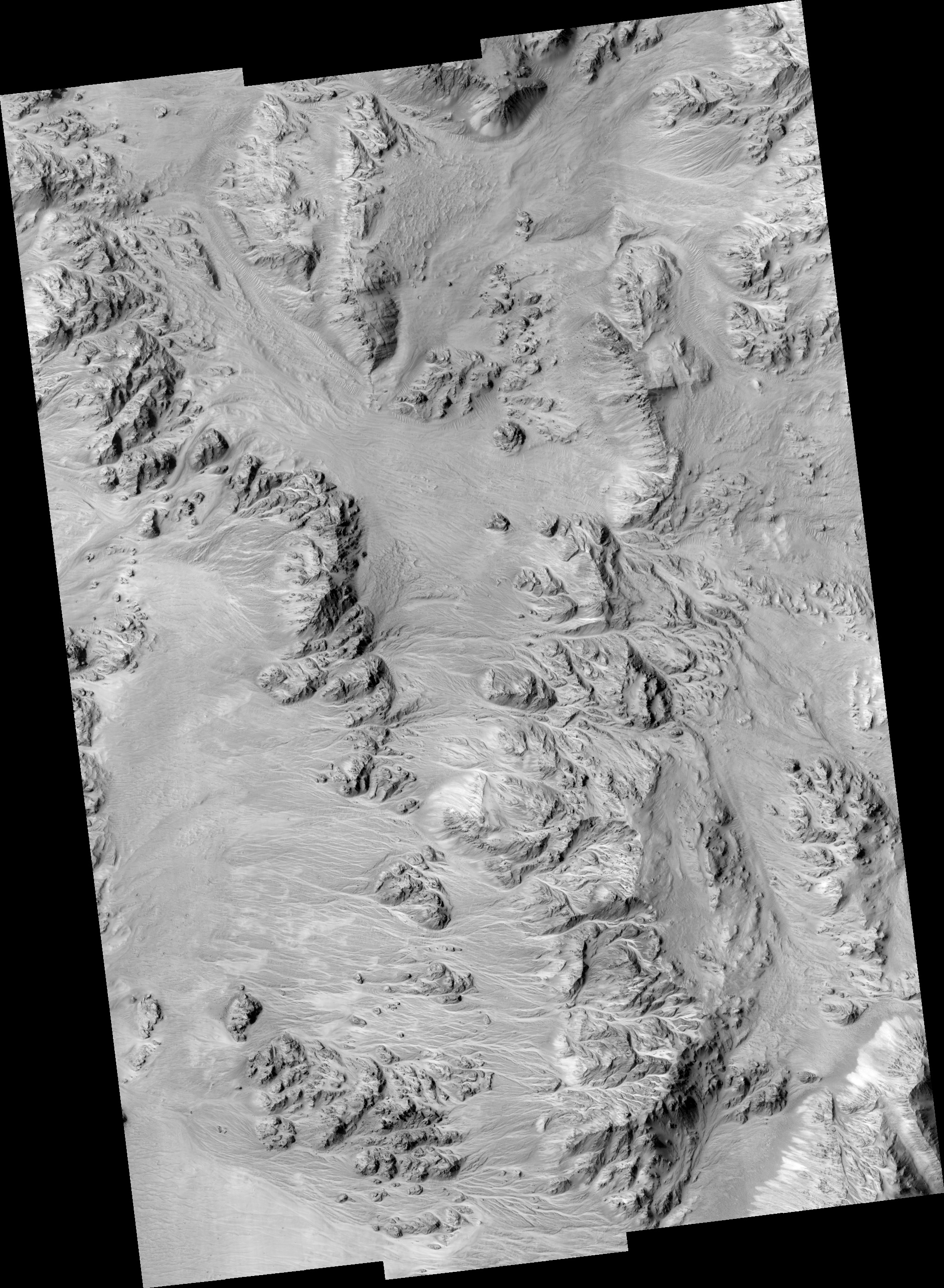 It remains an open question if life has ever existed on Mars; future missions including the European-Russian ExoMars and NASA Mars 2020 Rover will continue the search for past and maybe existing life on our neighboring planet.

The Mars Express spacecraft has been in orbit of Mars since 2003, and is currently on an extended mission. 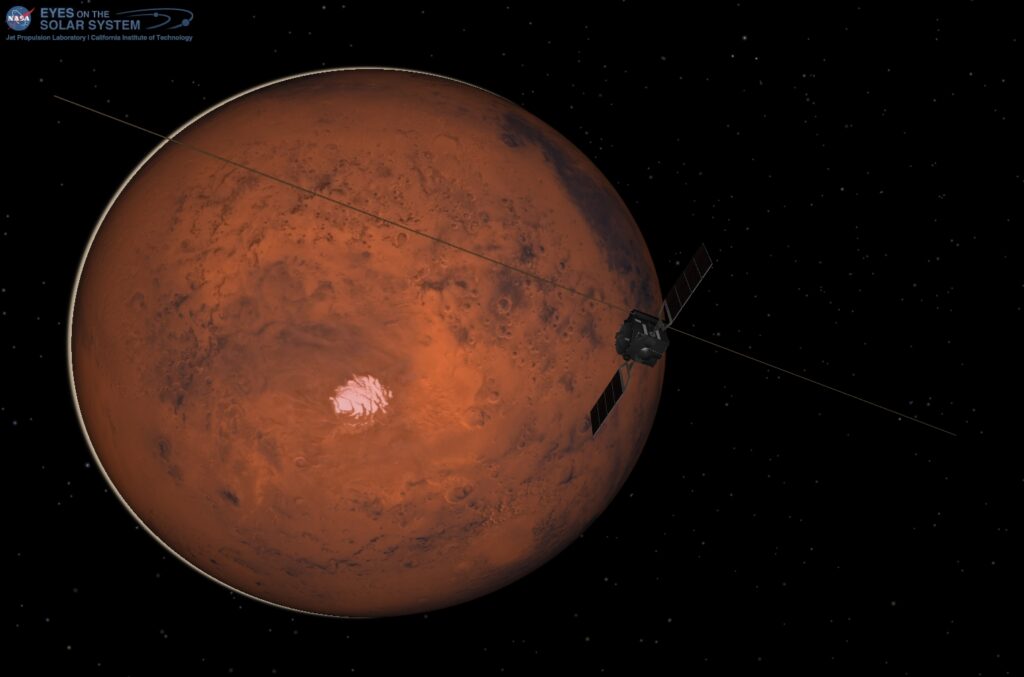 The MARSIS instrument was funded by the Italian Space Agency (ASI) and NASA and developed by the University of Rome, Italy, in partnership with NASA’s Jet Propulsion Laboratory.

“Radar evidence of subglacial liquid water on Mars” by R. Orosei et al is published in the journal Science.

As I was writing this post, I was reminded of the Mars WebCam aboard the Mars Express spacecraft – it literally IS a webcam pointed at the planet Mars. Here’s the Twitter feed for the images:
Tweets by esamarswebcam