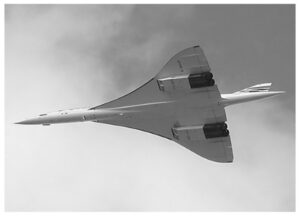 This past Spring semester a student in my Astronomy 101 class at Jefferson Community & Technical College here in Louisville asked an interesting question: “Are Star Wars and Star Trek science fiction, or are they fantasy?”  Well, if science fiction requires scientific plausibility, then they are probably fantasy.  Why?  Because they rely on faster-than-light travel.  As best we can tell from the laws of physics, faster-than-light travel and communication are highly problematic from a theoretical perspective.  Moreover, even far slower travel has turned out to be problematic from a practical perspective.  Technology is not advancing in these key areas, and in one way we are significantly retreating.  Technology is endlessly hyped and marketed, so to say such things in today’s culture—or pop culture, if we are thinking of Star Wars and Star Trek—is to speak heresy.  But is it not true?

Star Wars and Star Trek are built around an imagined advanced technology that allows for rapid travel and communication among the stars.  In Star Wars the travel technology is called ‘hyperdrive’; in Star Trek it is called ‘warp drive’.  For those of us with interest in astronomy, surely such ‘drive’ has appeal, for it suggests we might one day directly explore the universe, rather than observe it with our telescopes.  And is this technology not plausible, since technology is constantly improving by leaps and bounds?  Is it not just a matter of time before we humans have the technology to directly explore the stars? 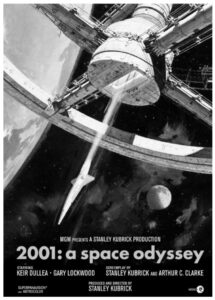 Promotional poster for the movie “2001: A Space Odyssey”, showing space travel in the year 2001, as envisioned in the late 1960’s.  The large object with spokes like a wheel is a space station in orbit around Earth.  Earth is the large world visible in the background; the smaller world at lower right is the moon.  The ship leaving the space station is a commercial passenger vehicle—a space airliner.  Needless to say, space travel in 2001 fell well short of what is envisioned here.  In fact, with the U.S. Space Shuttle program terminated in 2011, it is unlikely that this sort of technology will be developed in the foreseeable future.

Perhaps not.  Consider this further bit of heresy: technology has limits.  Two areas where technology is not constantly improving by leaps and bounds are transportation and communication.

Today, progress in transmitting information does continue at a rapid pace.  Instead of sending a few lines of text over a telegraph, we can send a hundred pages of text in PDF format as an e-mail attachment, or stream a movie into our homes at such high resolution that it looks good on a big screen.  However, the e-mail attachment or the streaming beats the telegraph in terms of volume of information transmitted, not in terms of actual speed.  The e-mail of today, and the telegraph of the 19th century, both work via the same basic technology—transmitting information via electromagnetic signals traveling along conducting wires or optical fibers.  Those signals travel at a certain speed.  A “hello” sent by 19th-century telegraph and a “hello” sent by 21st century e-mail both flash across the country in an instant, because electromagnetic signals traveling along wires or fibers flash across the country in an instant.  But in the 21st century we can also send that hundred pages of text in PDF format as an attachment to the “hello” e-mail—something not possible with the telegraph.  We might think of the telegraph as a motorcycle, and the e-mail as a heavy truck, each carrying mail and traveling on an interstate highway with a speed limit of 70 mph (well-enforced).  Both will cross the country at the same rate, and the motorcycle is the equal of the truck for short notes.  But the truck can carry bags and bags of mail—it moves a greater volume, even if it travels at the same speed.  This same idea of limited speed holds true for wireless technology, which also relies on electromagnetic signals.  Wireless electromagnetic signals travel at the speed of light—no faster, no slower—the same speed at which wireless signals have traveled ever since wireless technology was developed at the end of the 19th century.  Since the invention of the telegraph, our gains in communication technology have come from making the truck bigger, not from making it move faster.  NASA’s signals for communicating with the rovers on Mars today travel to the Red Planet no faster than did NASA’s signals to the Mariner probes that went to Mars in the 1960’s.  There is no way to change this, absent discovering a new realm of physics.

Progress in moving people has been less definite than progress in communication.  Automobiles traveling on wide, well-paved roads today move at essentially the same speed as they did fifty years ago (although certainly today’s automobiles move at those speeds more safely).  We envision self-driving cars, but no one is talking about building a 300 mph highway system.  Rail travel in some places is getting faster.  But in air and space transport, our fastest forms of travel, there has been a clear decline.  Between the mid 1950’s and the late 1960’s, air and space transport zoomed from no space travel at all to humans on the moon.  Movies and television shows from the 1960’s and 1970’s like 2001: A Space Odyssey and Space 1999 envisioned that, by the end of the 20th century, humans would have huge space stations, bases on the moon, and giant, technologically advanced space ships that could travel the solar system.  That did not happen.  Humans have never returned to the moon since the NASA Apollo program of the late 1960’s and early 1970’s.  In fact, since then we have not even risen beyond a low Earth orbit.  We have barely gotten out of Earth’s atmosphere.  And since the last Space Shuttle flight in 2011, the United States, the only country to send men to the moon, does not send people into space at all.  Even travel within the atmosphere has declined.  In 2003, the British and French supersonic airliner known as the Concorde was taken out of commission; the Concordes were sent to museums.  The Concorde was the fastest form of passenger transportation ever developed—it could fly at over twice the speed of sound, 240% faster than a conventional jet like a Boeing 747 or even the new Boeing 787, and substantially faster than even many high-performance military jets.

Consider that from Columbus’s arrival in America in the late 15th century to the development of the Concorde, the time required to cross the Atlantic progressively declined as travel by ship, and then by airplane, got progressively faster.  With the end of the Concorde, travel has gotten slower, and the time required to cross the Atlantic has dramatically increased.  We in the early 21st century are unable to travel faster than our parents.  We cannot blast across the Atlantic in a few hours like Grandma could back in the 1980’s and 1990’s.

When in human history was the last time such a set-back occurred?  When did the best travel times last double?  Perhaps in the future there will be a new Concorde; on the other hand, perhaps high-speed travel will remain impractical.  Regardless, for now we have reached a limit in transportation technology. 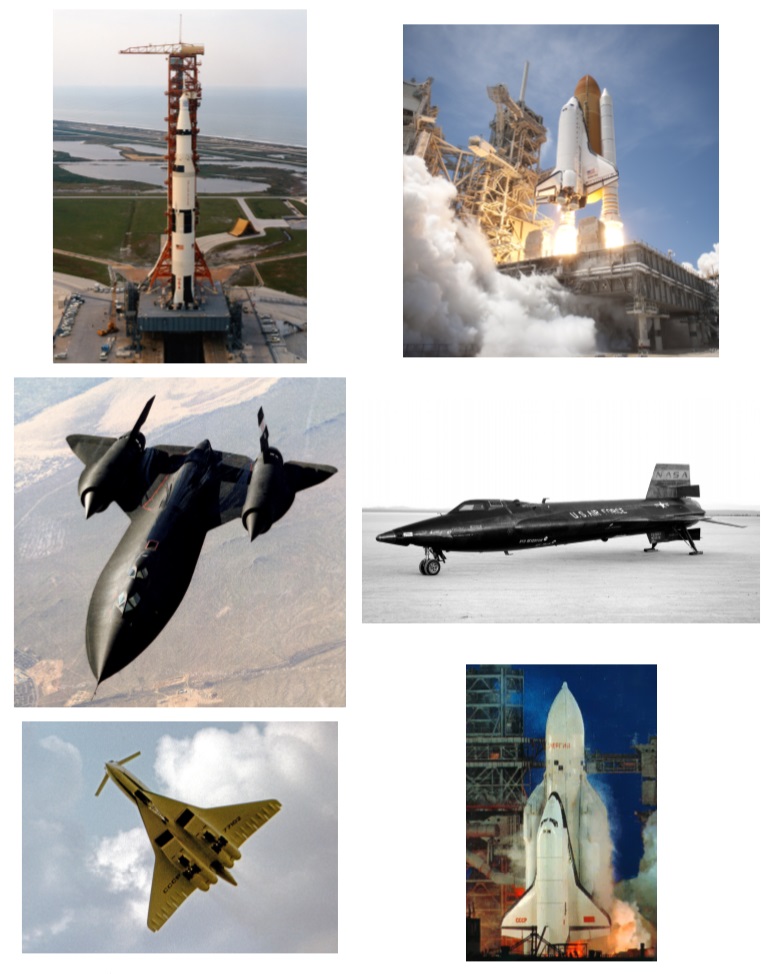 Shown here are the Saturn V rocket of the Apollo moon landing program, the Space Shuttle, the SR-71 spy plane, the X-15 space plane, the Soviet Tupelov TU-144 supersonic airliner, and the Soviet Buran shuttle.  All of these are like the Concorde in that they are, or were, examples of technology that is no longer available.  The demise of the Apollo program has notably led to a wide-spread belief (referenced in the 2014 movie Interstellar, for example) that the Apollo program was a government “hoax”.  But Apollo, like the Space Shuttle or the Concorde, is actually just one example of a technology of “faster and farther” that was attainable but was not sustained, one example of the existence of technological limits.

And if somehow we get out of the technological slump we are in, the fact remains that to the best of our knowledge, the speed of light is an ultimate limit in both transportation and communication technology.  Einstein’s relativity theory tells us that no object or signal can move faster than the speed of light; even getting an object up to near the speed of light requires immense amounts of energy.  This is not just some idea that exists on paper.  We lack the technology to build space ships that move fast enough to test this theory, but it is not difficult to accelerate sub-atomic particles to high speeds.  Indeed, if you have an old-style non-flat-panel computer monitor or TV, then you have a device that accelerates sub-atomic particles—electrons—to high speeds.  Older style TVs and monitors that use cathode ray tube (CRT) technology work by accelerating electrons to high speeds (which hit your screen, causing it to glow).  Even the powerful machines scientists have built for hurling tiny particles like protons and electrons with tremendous energy (machines called “particle accelerators”, such as the Large Hadron Collider) cannot accelerate these tiny particles to the speed of light.  And astronomers have not observed phenomena in the universe that suggest that anything out there is travelling faster than the speed of light—so far even the most powerful explosions or jets of matter we see in space seem limited to moving under the speed of light. 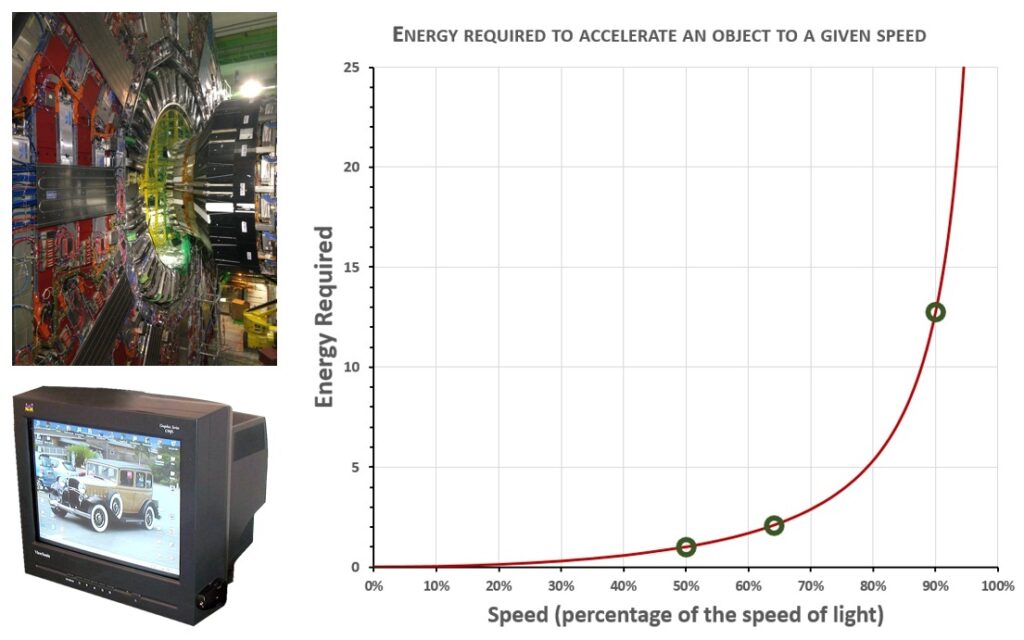 Traveling or sending messages faster than the speed of light appears to be not just technologically difficult, but physically impossible.  It is so commonly portrayed in science fiction that many people assume there must be at least some shred of scientific validity to it, but there is little more scientific validity to Captain Kirk’s starship Enterprise than there is to Harry Potter’s flying Nimbus 2000 broom.  The Enterprise and the Nimbus are figments of a writer’s imagination, something that makes for something cool in a story—something that goes zoom—and nothing more.  Of course, we could discover warp drive.  That is, we could discover a whole new realm of science that we are currently unaware of.  And we could discover physics that makes a broom fly, too.

Star Wars and Star Trek are not really scientifically plausible.  They are not science fiction.  They are fantasy, like Harry Potter.  We’d better keep building telescopes.

*Of course one could always send signals visually (such as was done so dramatically in the movie The Lord of the Rings: The Return of the King by means of lighting a sequence of fires).