I was chatting with a friend in an online forum when the subject of Pluto came up. He is quite knowledgeable about spaceflight, but has not followed the New Horizons mission closely. 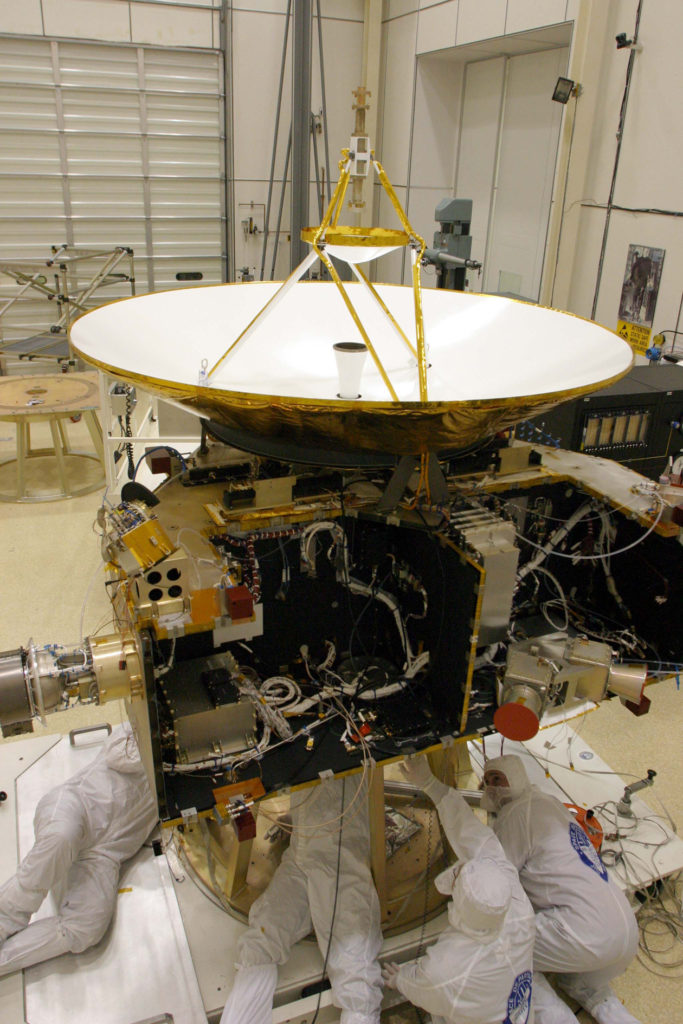 In February 2005, team members check the dish antenna of the New Horizons spacecraft at the Johns Hopkins University Applied Physics Laboratory in Laurel, Maryland. Image courtesy NASA/Johns Hopkins University Applied Physics Laboratory/Southwest Research Institute
My friend expressed disappointment at learning that New Horizons was a flyby, not an orbiter, and would only spend a few hours in close proximity to Pluto and its moons. I suppose that he may have in mind all the spacecraft which, in the last decade or so, have been orbiting other planets. There’s Cassini circling Saturn, Messenger circling Mercury, and whole fleets of Venus and Mars orbiters, to say nothing of the multiple rovers on the surface of Mars. We’ve also seen probes orbiting several asteroids and the Moon. Perhaps he’s accustomed to the luxury of images and other scientific results streaming constantly Earthward. At irregular intervals, scientists hold a press conference and show us another planetary wonder or two.

Pluto’s different. It’s never been visited, and thanks to its immense distance from the Sun, it’s a difficult target.

In exploring other worlds, the first step is almost always a flyby mission. It’s not utterly impossible to build a spacecraft to orbit Pluto–and I like to think that this will be done someday–but it would take enormous resources.

An exciting discovery about Pluto also comes into play. Because of Pluto’s “eccentric” elliptical orbit, its distance from the Sun varies considerably. Unlike other planets with nearly-circular orbits, this has a large effect on Pluto’s temperature. In 1988, nearly the warmest moment in Pluto’s 248-year orbit, astronomers found surprising evidence of an atmosphere surrounding the small, frigid world.

According to their best understanding, this atmosphere was temporary. As Pluto becomes more distant from the Sun, it cools off. Gases could become frost, solids coating the surface, within a couple of decades after the discovery. If so, they would remain frozen until Pluto’s orbit once again brought it closer to the Sun.

This lent urgency to the idea of sending a spacecraft to Pluto. Does a gaseous atmosphere on a super-cold world sound intriguing? Well, it exists now, and will a few years from now—but according to atmospheric models, it will vanish sooner or later. Observe it now, or science must wait a couple of centuries for the atmosphere to reappear. Our generation, if the models were correct, could seize a fantastic opportunity. Could a spacecraft get to Pluto in time?

So here’s what I told my friend, the one who was wishing for more than a brief flyby. I asked him to imagine himself as a mission planner in the 1990s. Pluto is moving further away from the Sun. The thin atmosphere detected in 1988 is collapsing, and may be frozen out soon. Your choices, as of the late 1990s:

1. You might be able to get money from NASA to send a VERY light, small probe on a VERY big rocket to get there in about a decade. A Jupiter gravity assist might help. If your proposal wins the competition against everybody else’s “New Frontiers”-class interplanetary proposals, that is. There’s a cost cap. Don’t bust it.

2. You can persuade NASA to send a more substantial probe that will brake at Pluto and enter orbit. If your engineers can find a way to do this at all with available launchers. And if NASA is willing to spend multiple billions of dollars on your project. And if the rest of the U.S. government concurs.  (As far as I know, nobody tried this.) Don’t take too long. The atmosphere is still collapsing.

3. You can try to find some other spacegoing entity on planet Earth and persuade it to do either 1 or 2. (As far as I know, nobody tried this. It might have been going on without my knowledge. A decade later, this team presented the case for 2 to the European Space Agency.)

2 and 3 are nearly impossible. The scientists, engineers, and administrators championing a Pluto mission were determined not to do 4.

In an ongoing scientific drama, option 1 was attempted several times during the 1990s, and in the end succeeded in the 2000s. Pluto-350 didn’t fly. Pluto Fast Flyby didn’t fly. Pluto Express didn’t fly. But each planned mission brought the collaborators, mindful of the ever-cooling atmosphere, a bit closer to their goal.  At last, New Horizons departed Earth in 2006.

When, along the way, they got some money to study a Pluto spacecraft, they spent some of it on developing very lightweight, very capable instruments and spacecraft electronics. They were shooting for high-quality science, and for long-duration reliability. New Horizons is consequently more capable than some of the bare-bones early proposals were. It’s going to make the most of that one flyby. But it’s still missing many instruments you’d find on Voyager, Galileo, or Cassini, such as a magnetometer.

The spacecraft will reach Pluto on 14 July of this year. And it seems (knock wood) to be working well.  Then it will sail rapidly onward.

(Ironically, in the years since the launch of New Horizons, further observations have suggested that Pluto’s atmosphere may not collapse after all. Nevertheless, studying it close-up will reveal much more than could be learned from ground-based observations.)

It took heroic and persistent campaigning to get New Horizons launched. I think we should be grateful we’re getting a flyby at all. As I should not need to remind my friend, rocket science is hard.