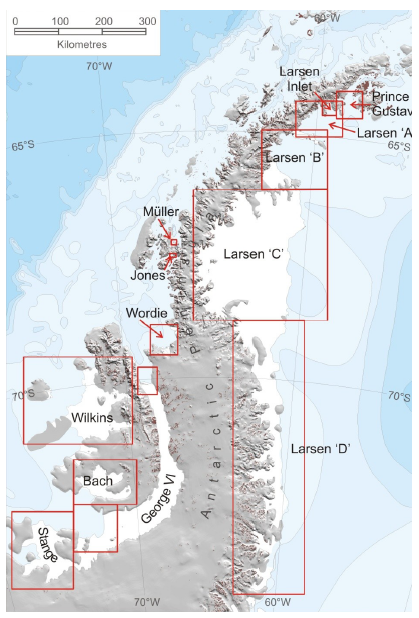 Last week, a new iceberg the size of Delaware broke off from Larsen C, an ice shelf off the peninsula of Antarctica. Larsen C is named after Carl Anton Larsen, a whaler who sailed along Antarctica’s Peninsula in 1893 (down to about the 68th parallel south). The map on the right displays many ice shelves, including four that bear Larsen’s name (A, B, C, and D).

The Larsen A ice shelf toward the northern tip of the peninsula collapsed and disintegrated in 1995. From January to March of 2002, the Larsen B ice shelf collapsed, sending a group of ice chunks the size of Rhode Island into the Weddell Sea. Larsen B is in the process of disintegrating as did Larsen A. It is speculated that the ice shelf will completely disintegrate by 2020.

This latest iceberg is the fourth largest to break off from Antarctica’s ice shelves, decreasing the size of Larsen C by 10%. The impact this iceberg will have on the environment and local shipping routes is still unclear. There is equal uncertainty of the impact this iceberg will have upon the future of the Larsen C ice shelf. Some scientists think Larsen C will remain intact due to the health of underwater “pillars” that provide stability for the shelf while others believe Larsen C’s days are numbered, facing a similar fate as did Larsen A and B. Time will tell what the long-term impact of this iceberg will be, but events of this nature often provoke questions about the potential of rising sea levels, the stability of Antarctica’s remaining ice shelves, and how such events will impact global climate in the future?

NASA image of the crack that developed over the years, creating this large iceberg. Graphic Credit: NASA/USGS Landsat

A question of immediate concern is whether or not global warming is contributing to these events? Eugene Domak, Professor of Geological Oceanography at the University of Southern Florida and Director of LARISSA, a group that analyses climate change and its impact upon the Larsen ice shelves, stated in 2015 that it is unclear what is definitively causing these collapses, but a potential smoking gun could be the increase in water and air temperature in this region. If this is the case, the next logical question would be whether or not human activity contributed to these temperature increases? For more information on the new iceberg that broke off of Larsen C, check out this article from NASA entitled, “Massive Iceberg Breaks Off from Antarctica.”

As new icebergs are born in the south, my attention is drawn north to the Arctic and Greenland. Recent NASA research has shown that the Arctic is experiencing a higher number of warm weather events. The significance of this finding is that warmer weather in the north will keep Arctic ice from thickening and growing. This development also leads to the melting of ice in the Arctic that can adversely impact the existing Arctic ecosystem, contribute to the rising of sea levels, and creates hardship for the indigenous peoples whose livelihood depends upon the stability of Arctic ice.

In 2007, Patriarch Bartholomew organized the seventh Religion, Science, and Environment (RSE) Symposium, which explored Greenland and the Arctic Sea.  The clear focus for this Symposium was how pollution has adversely impacted Greenland’s people and ecosystem. A sobering truth about these contaminants is that their origins emanate from Europe and the United States. The Symposium explored how these contaminants are contributing to a higher frequency of diabetes, increasing mercury levels in Greenland’s food supply, and impacting childbirth by decrease the ratio of male births from 1.1 male child per female to 2 female children for every male birth. From the standpoint of ethics and morality, one must ask what level of responsibility countries have when their pollution adversely impacts the people of another country such as Greenland? This ethical question was not lost to Pope Emeritus Benedict XVI who offered a letter of greeting to Patriarch Bartholomew and the participants of the RSE Symposium.

Preservation of the environment, promotion of sustainable development and particular attention to climate change are matters of grave concern for the entire human family. No nation or business sector can ignore the ethical implications present in all economic and social development. With increasing clarity scientific research demonstrates that the impact of human actions in any one place or region can have worldwide effects. The consequences of disregard for the environment cannot be limited to immediate area or populus because they always harm human coexistence, and thus betray human dignity and violate the rights of citizens who desire to live in a safe environment (cf. Message for the 2007 World Day of Peace 8-9)…

Your Holiness, the international and multi-disciplinary nature of the symposium attests to the need to seek global solutions to the matters under consideration. I am encouraged by the growing recognition that the entire human community – children and adults, industry sectors, States and international bodies – must take seriously the responsibility that falls to each and every one of us. While it is true that industrializing countries are not morally free to repeat the past errors of others, by recklessly continuing to damage the environment (cf. ibid., 10), it is also the case that highly industrialized countries must share ‘clean-technologies’ and ensure that their own markets do not sustain demand for goods whose very production contributes to the proliferation of pollution. Mutual interdependence between nations’ economic and social activities demands international solidarity, cooperation and on-going educational efforts. It is these principles which the Religion, Science and the Environment movement courageously upholds. (Pope Emeritus Benedict XVI, To His Holiness Bartholomaios I. September 1, 2007)

When reflecting upon Pope Emeritus Benedict XVI’s call for world leaders to take seriously the responsibility of care for creation, we are reminded that care for creation is not a uniquely Orthodox or Catholic issue. Rather, it is a universal ethic, realizing that all people participate in God’s plan of salvation upon this good Earth and the health of this good Earth is necessary to allow God’s plan of salvation to be accomplished. Patriarch Bartholomew affirmed this universal approach to environmental ethics and explained how Scripture can help a modern world rethink how we are to interpret the “signs of the times.”

For better or worse, we are now living in an age when the destinies of all human beings, and all human communities, are ever more closely intertwined. Patterns of behavior and consumption in one corner of the globe can affect the lives and livelihood of people who live at the other extremity of the earth.  If the environment of the polar region is now changing at a frightening pace, that is because of economic activities and energy choices in the industrialized world, far to the south. And the alteration in the Arctic environment has the potential to inundate islands in the tropics, or cities as far away as Shanghai or New York. Borrowing a phrase from modern journalism, what we are experiencing is the death of distance. There is no segment of the human race which can hope to isolate itself from the destiny of mankind, and of life on earth in general.

This new proximity, this closeness need not be a bad thing if we learn to read the “signs of the times”. (Matthew 16:3).  To some degree, we are all drawn closer by a common experience of fear and suffering as the consequences of climate change are felt in different ways.  At a time when climatic emergencies of many different kinds are affecting the lives of hundreds of millions of people, we have no moral choice but to “bear one another’s burdens” as the New Testament (Galatians 6:2) enjoins us. Here in the Arctic, melting glaciers are threatening the way of life of traditional hunters. In our home region of southern Europe, we have seen an alarming combination of heatwaves, drought, fires and also floods. Scientists inform us that all these phenomena are connected. When we visited Brazil last year, the region was still recovering from a highly unusual drought. Brazilian scientists told us that illegal deforestation was leading to a decrease in rainfall and making fires more common. Fires and deforestation in Brazil are among the many factors which are altering the climate, and hence the environment, here on the northern edge of the earth. (Patriarch Bartholomew I, Speech at the Katuaq Cultural Centre, September 9, 2007)

These reflections from a Pope and a Patriarch combined with the struggles of the people of Greenland and the emerging environmental sciences call us to a new sense of solidarity that Pope Emeritus Benedict XVI called an “intergenerational solidarity.” This vision of ecological solidarity calls us to ensure access to natural resources for both current and future generations, realizing that human dignity is challenged when basic needs are denied. This solidarity has been a constant plea from Pope Francis, finding its strongest voice in his encyclical Laudato Si’.

I urgently appeal, then, for a new dialogue about how we are shaping the future of our planet. We need a conversation which includes everyone, since the environmental challenge we are undergoing, and its human roots, concern and affect us all. The worldwide ecological movement has already made considerable progress and led to the establishment of numerous organizations committed to raising awareness of these challenges. Regrettably, many efforts to seek concrete solutions to the environmental crisis have proved ineffective, not only because of powerful opposition but also because of a more general lack of interest. Obstructionist attitudes, even on the part of believers, can range from denial of the problem to indifference, nonchalant resignation or blind confidence in technical solutions. We require a new and universal solidarity. As the bishops of Southern Africa have stated: “Everyone’s talents and involvement are needed to redress the damage caused by human abuse of God’s creation”. All of us can cooperate as instruments of God for the care of creation, each according to his or her own culture, experience, involvements and talents. (Pope Francis, Laudato Si’. 14)

The above video is a summary of the RSE Symposium held in the Arctic. When reflecting upon emerging environmental issues at the South Pole or continued ecological issues at the North Pole, they remind us that care for creation is not to be seen as an isolated issue for the few, but a constant challenge to be faced by all. Pray this week that the world may continue to embrace an ecological solidarity, seeing in this solidarity a conscious decision to provide the material needs that allow humanity to pursue their spiritual needs.