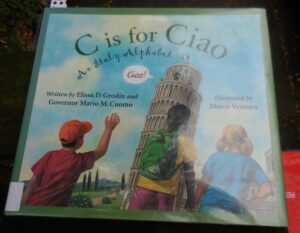 History of astronomy turns up in unexpected places.  Unfortunately that history is often poorly presented.  Consider this example, found in a children’s book called C is for Ciao: An Italy Alphabet by Elissa D. Grodin and Governor Mario Cuomo:

G is for Galileo,
punished when he proved
that the sun was sitting still
and the earth’s the one that moved

On the same page is—

Until the Polish astronomer Nicolas Copernicus discovered that the sun is the center of our solar system… people since the second century had thought the sun revolved around the earth. 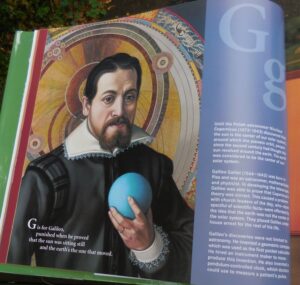 In developing the telescope, Galileo was able to prove that Copernicus’s theory was correct.  This caused a problem with church leaders of the day, who—disrespectful of scientific facts—were offended by the idea that the earth was not the center of the solar system.

But Copernicus did not discover that the sun is the center—he hypothesized that it was.  Galileo did not prove that the earth moves.  He proved that certain older ideas about the universe were wrong (although some astronomers in Galileo’s time might have argued even this point).

Consider the wonderful illustration of Galileo in C is for Ciao.  Look behind Galileo.  That is not the heliocentric hypothesis of Copernicus that is shown.  It is the hypothesis of Tycho Brahe, a very new hypothesis in Galileo’s time, in which the sun and moon and stars circled the Earth, while the planets circled the sun.  See at upper right where it says “Circulus Jovis” (“The Circle of Jupiter”) and shows Jupiter with four moons (moons discovered by Galileo)?  Note that the Jovian circle is centered on the sun (the sun being behind Galileo’s right temple).  Meanwhile the sun is circling something else: the stationary Earth (behind Galileo’s throat). 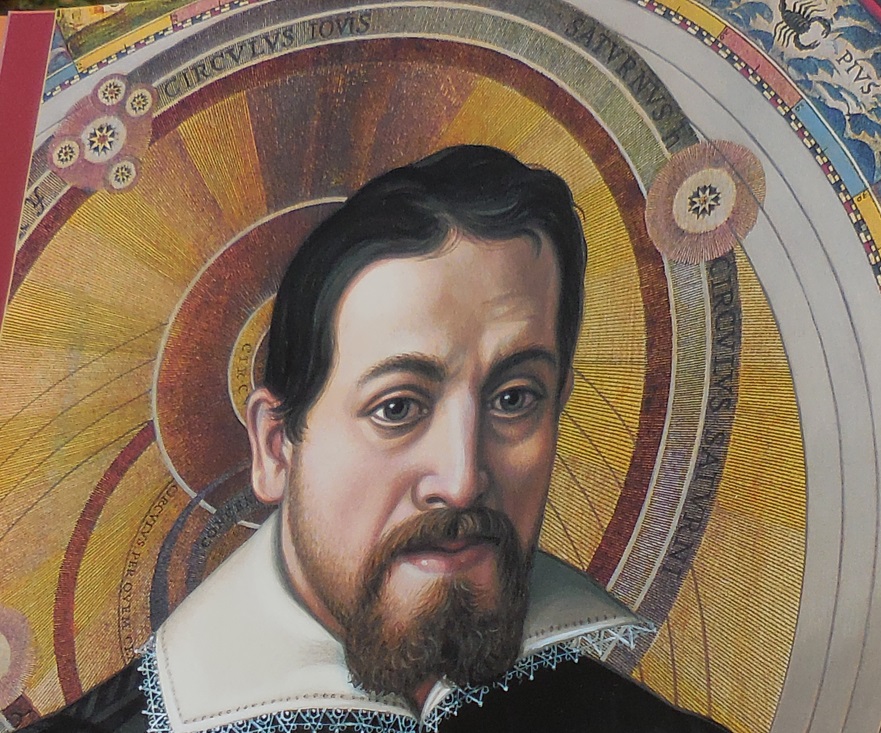 Galileo did not support Brahe’s hypothesis, and probably would not be happy to see himself portrayed in front of it.  However, it was wholly compatible with Galileo’s telescopic discoveries.  It was why, for example, using the telescope to prove that Venus circled the sun was not the same as proving that Earth moves—because in Brahe’s system Venus circled the sun, and the Earth did not move.  (Proving Earth’s movement—showing that Copernicus was right and Brahe wrong—took a very long time.  I can recommend a book on this topic if you want all the details.)

So C is for Ciao is wrong about some things.  It should indeed celebrate Galileo’s accomplishments, but it should correctly present the business about proofs and people disrespecting facts, and it should put the correct picture behind Galileo.  But C is for Ciao is not alone.  Consider DK Eyewitness Travel: Italy 2016.  It says—

Galileo Galilei proved that the earth revolved around the sun, overturning Church doctrine.  He was convicted of heresy in 1633.  Here he shows the rings of Saturn to Venetian senators.

There’s “proved” again.  And Galileo could hardly see the rings of Saturn with his telescope, and he did not recognize them as being rings.  Viewing Saturn through his telescopes was very difficult.  I doubt he showed such a difficult object to non-astronomers.

But one can’t be too hard on C is for Ciao and Italy 2016.  After all, look at the edition of Galileo’s Dialogue that is currently available.  What is on its back cover?  “Galileo proved.”

Why do so many people view science as being about smart men proving plain truths and having to drag everyone else into the light of scientific facts (and getting punished for that).  Why do they not view it as being about a dynamic contest of ideas that are compatible with the facts (like Tycho vs. Copernicus)?  Perhaps because their views are formed by the books they read as children, or even by travel books.  Such books might be the only science history many people read.  It is important that the people who write these books do their research and not be disrespectful of historical facts.