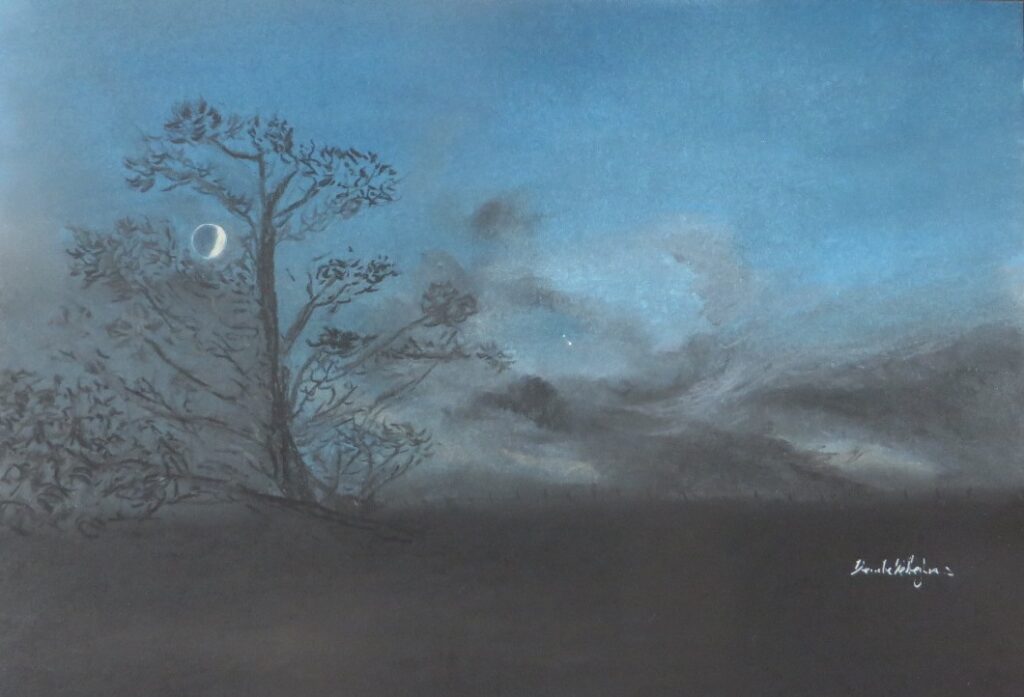 On December 18th there was a lot of clouds around in the south-west. My chances of seeing Saturn and Jupiter were not promising. However, I set up my materials and hoped for the best. I had my 15X70 binoculars on a tripod and my sketching materials. Pursuing the conjunction was still my goal even though the forecast for December 21st was abysmal.

The four-day moon looked gorgeous above our pine trees. I waited for the clouds to clear until a handy gap offered me Jupiter and Saturn. The planets appeared like two white blobs in my 15X70 binoculars. This view did not bring me enough detail. Also, it was not dark enough to see any planetary colour or moons. However, it was great to see both planets within my field of view. I wanted something more. I figured Jupiter and Saturn would soon disappear into the cloud bank on the horizon. Therefore, I started a different drawing.

I noticed the angle gave me the moon appearing to nest in the branches of a pine tree. That was it for me, that was the more I wanted. The four-day moon nesting in a tree while the gas planets floated in space pending their visual vanishing act here on Earth. Their historic alignment plus the amusing alignment of the moon in a tree.

The moon had that lovely line of light around its circumference. This edge glow would later be more pronounced as the phenomenon of earthshine developed. The edge glow line was clear, even though it was not exactly dark.

Christopher M. Graney explored this edge glow in some of this writing. Astronomers who Observe Visually and Draw What They See are cool—and valuable to the History of Astronomy! – Sacred Space Astronomy (vaticanobservatory.org)
I find it fascinating to read about as I have captured it a few times. In this new drawing, I made a circle for the moon and used a pale cream pastel to fill in the near side segment lit by the sun. I used a cotton bud loaded with some dark blue pastel to push the colour around. Care had to be taken not to get pastel on that line as it was perfect and unbroken to the eye.

On December 23rd the sky to the south-west was perfectly clear. Jupiter and Saturn looked like two eyes looking back at me. I set up to draw my only telescope view of the post-Jupiter Saturn conjunction. Everything looked good until I went in to get a stool. In those few minutes a north-west gale blew up, the telescope was shaking. My pre-prepared drawing circle was pelted with rain. Just a few minutes earlier my eyes had a feast. They had seen the bands and zones of Jupiter with colour, plus colour on Saturn. Two of Jupiter’s moons, Ganymede and Europa I think. All in one field of view. Everything snatched away in the blink of an eye, by black clouds that went on forever over the Atlantic Ocean.

Pursuing the conjunction was over, the activity brought me several drawings which people seem to like. Plus I was  given the joy of drawing these planets so close together and accessible to everyone by eye. Merry Chirstmas