Tonight I have a public program at my college’s observatory, which is located in a park in rural Indiana called South Harrison Park.  When putting together a schedule for the observatory, I try to find especially cool stuff around which to build programs.  Flyovers of the International Space Station (ISS) are always cool.  A night with a moon, planets, and an ISS flyover are great.  Thus, the night of October 12 seemed perfect for a program, because a quick look at the sky for that night using the Stellarium planetarium app shows the ISS passing through the evening sky, coming quite close to Saturn at 7:27 PM Eastern Time. 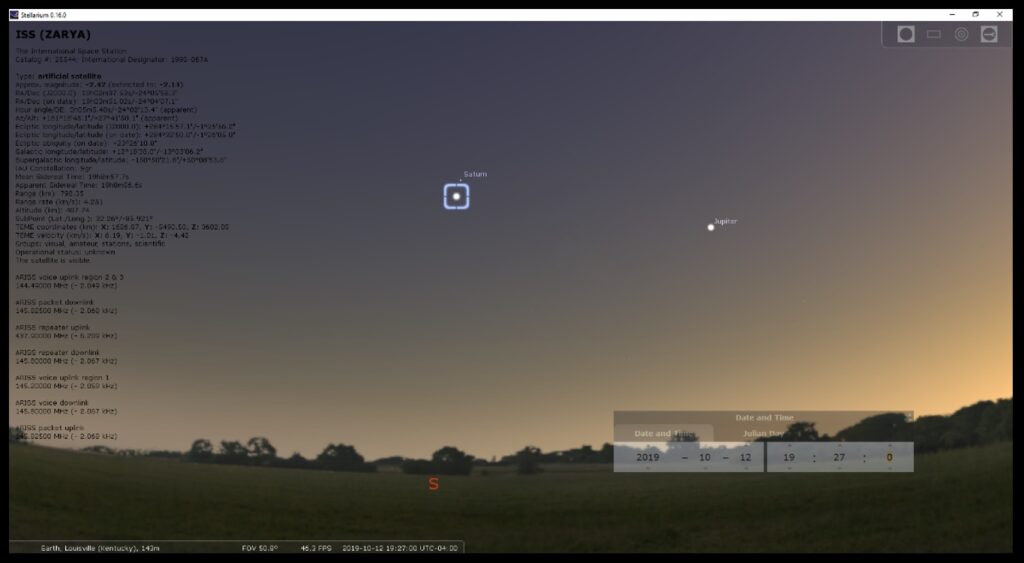 Stellarium showing the ISS passing close to Saturn at 7:27 tonight.

But the above is the view Stellarium gives of the ISS from “Louisville, Kentucky”, latitude N 38° 15′ 15.26″, longitude W 85° 45′ 33.87″.  The ISS is not very high above Earth—roughly 250 miles.  That may seem like a lot, but it is not so much that a change of position of a couple dozen miles on Earth would not have an effect.  Where will the ISS be at the same moment, as seen not from “Louisville”, but from South Harrison Observatory, to the south and west of Louisville?  (And for those of you who are thinking “isn’t Indiana north of Kentucky—yes, it is, but not everywhere!)  A quick look at Google Maps gives the coordinates of the Observatory:  38.070923° N, 86.016440° W. 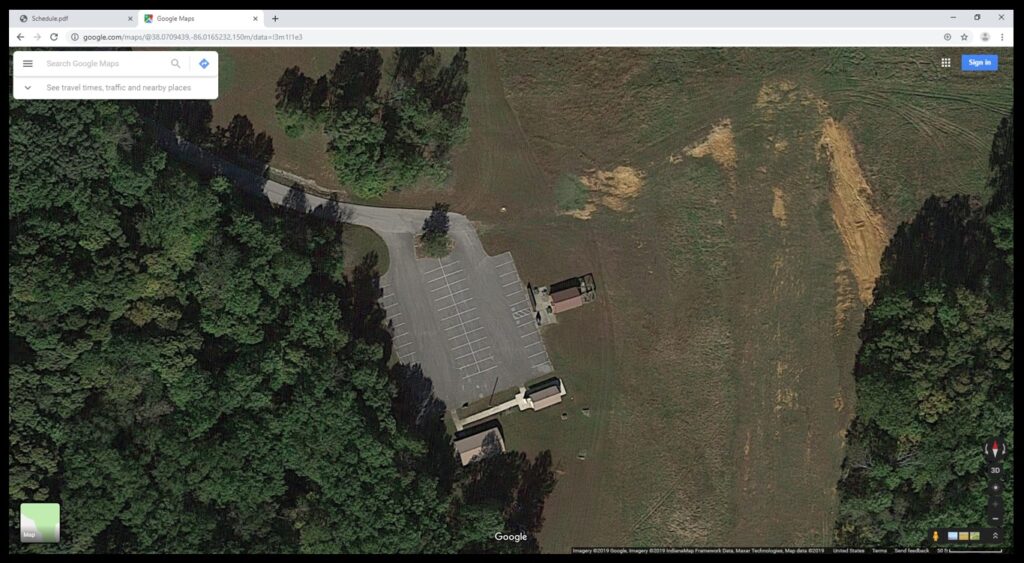 Let’s plug those observatory coordinates back into Stellarium, and see how the view changes.  The result is noticeable: 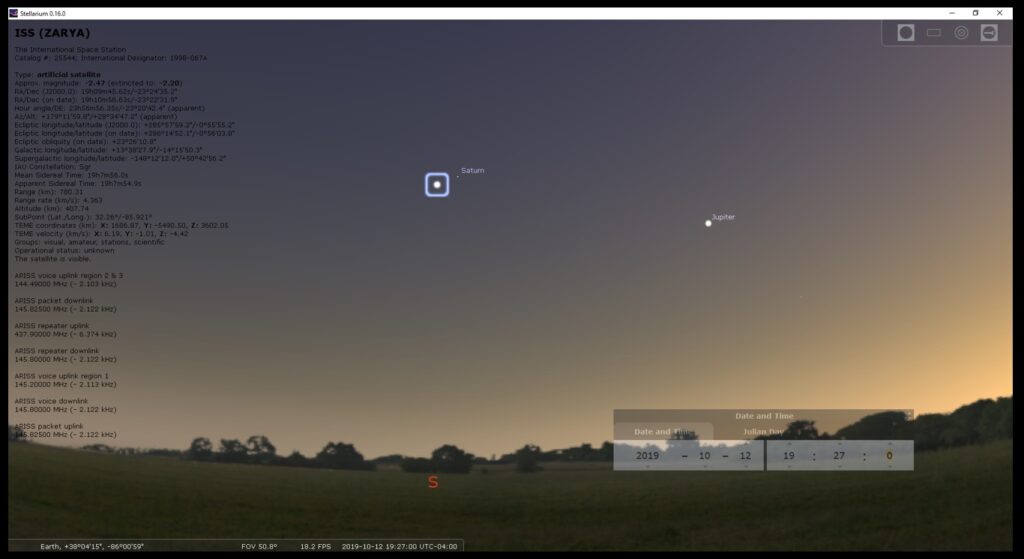 The ISS, from the observatory.

If shifting position by a couple dozen miles changes the view, the next question is, what would our location have to be in order for us to see the ISS pass right by Saturn?  That location can be determined by dialing the latitude and longitude coordinates in Stellarium back and forth until the ISS sits right on top of Saturn: 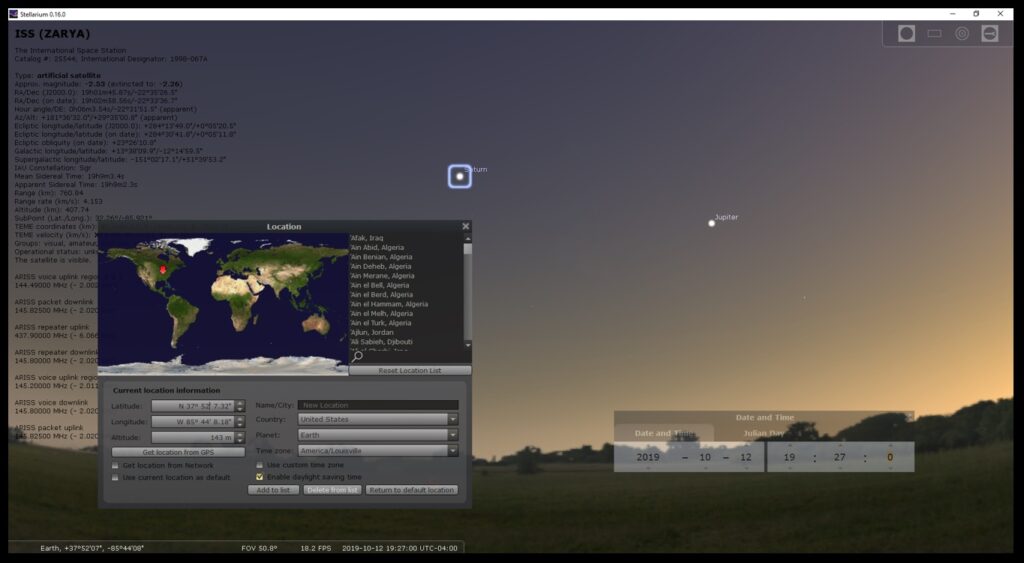 The ISS, right on Saturn.

The coordinates for seeing this are, according to Stellarium, N 37° 52′ 7.32″, W 85° 44′ 8.18″ (note that Google Maps likes decimal degree values of latitude and longitude, whereas Stellarium likes minutes and seconds).  Plugging this back into Google Maps reveals that this location is in a pond in Bullitt County, Kentucky: 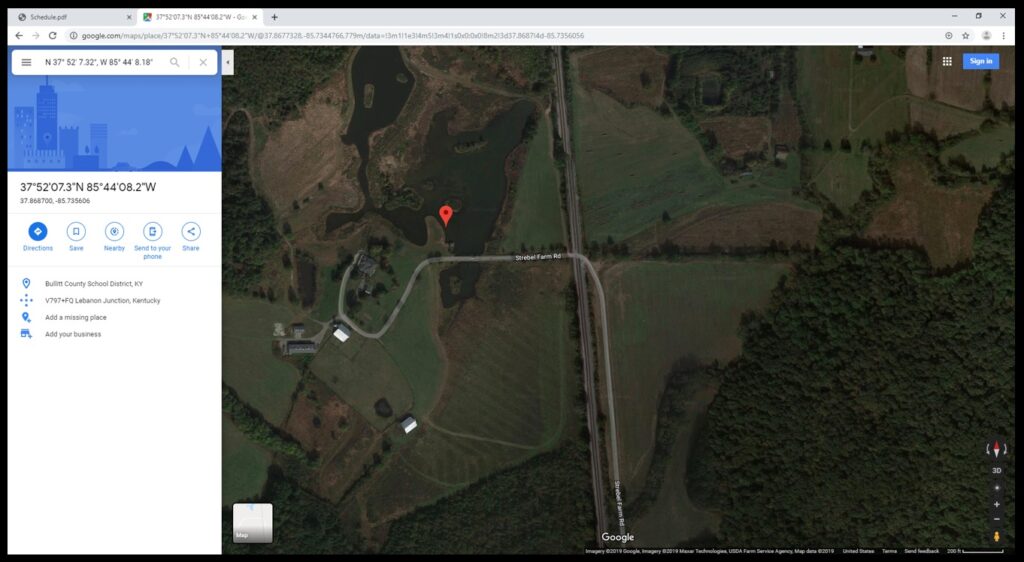 The location from which the ISS will appear right on Saturn.

Zooming out further shows the location relative to South Harrison Observatory (gold cross, below) and Louisville: 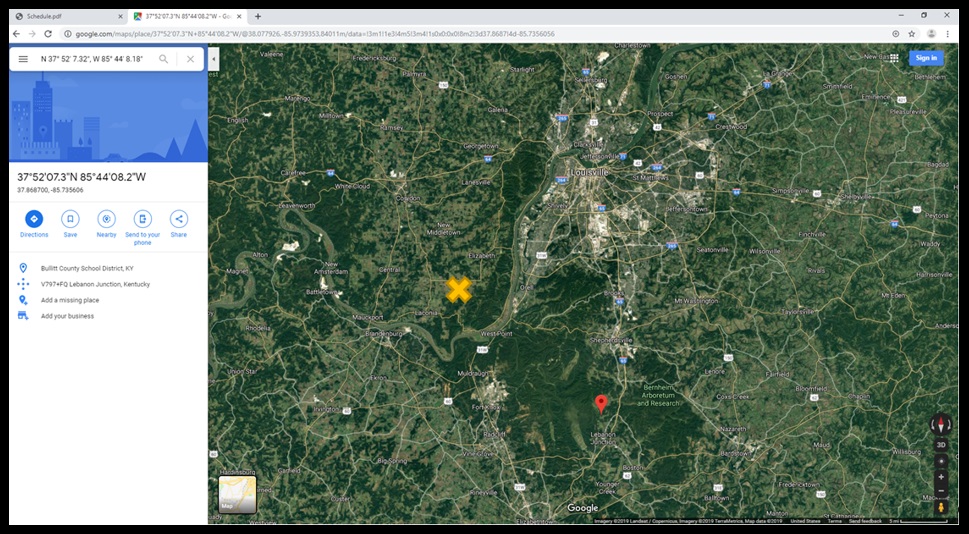 Now suppose I wanted to see this directly.  The road nearest to this location is almost a private drive, serving only a couple of houses; chances are I might not be welcome were I to show up along it in the evening, and hop out of the car to view the ISS.  However, a nearby road, Collings Hill Road (gold crosses, below), is clearly a public road, serving many houses. 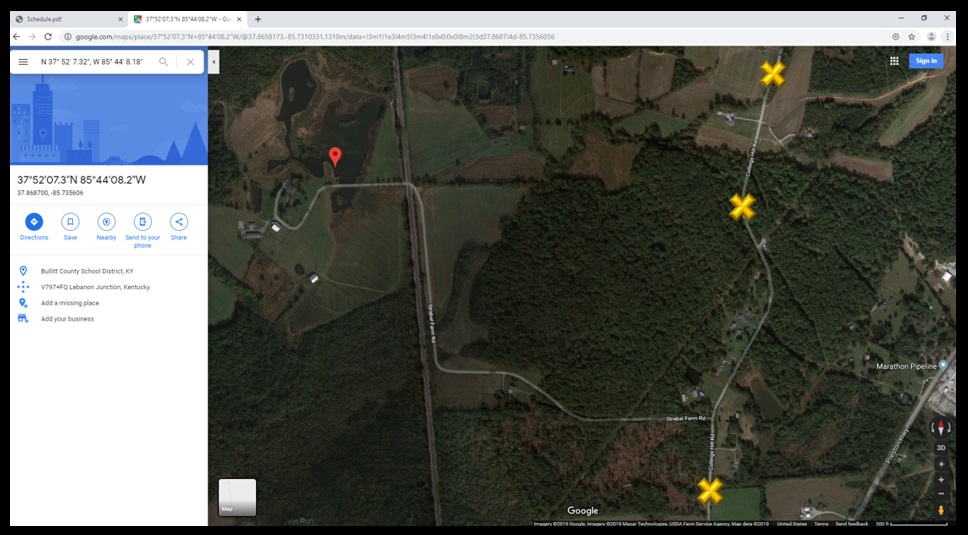 I might find a nice place, not too close to any house to disturb anyone, to pull off onto the shoulder and watch the ISS.  I might even find a safe place to set up a small telescope, and even see the ISS zip through the field of view.  The image below shows Stellarium’s simulated view of this event (as seen from the pond location).  Note how Stellarium does not show the ISS, just a big dot representing the station, which will be far brighter than Saturn will be. 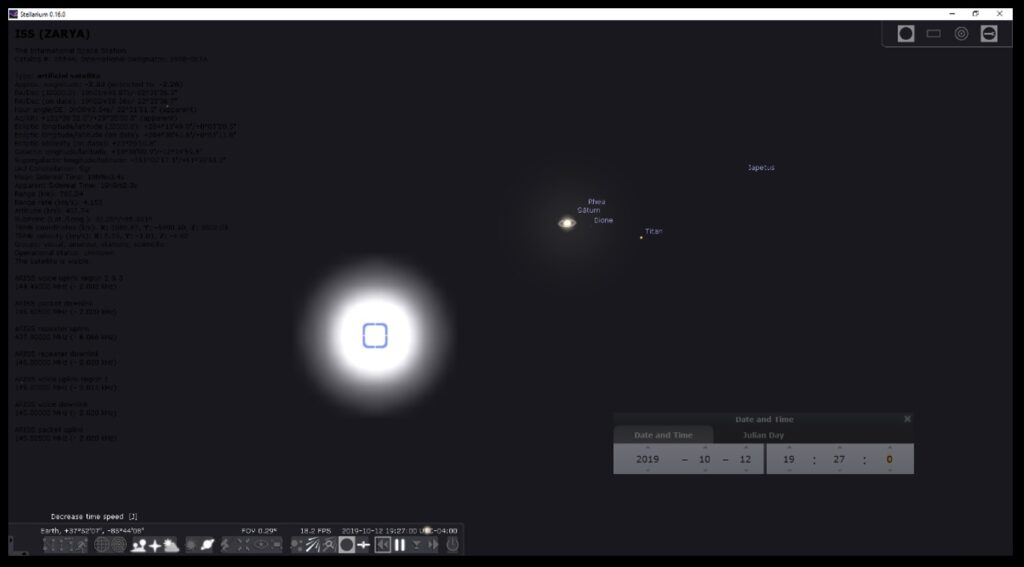 Of course this all hinges on the accuracy of both Stellarium and Google Maps.  If either is off in its latitude and longitude figures, then the ISS will not cross Saturn as seen from Collings Hill Road near that pond.  And of course I won’t be on Collings Hill Road, because I will be doing the program at South Harrison Observatory tonight.

However, this is a thing that anyone could try.  If you know your way around Stellarium and maps, I encourage you to give it a try, and, if you are a member of the blog (click here to join and support), maybe report here how it worked out for you.