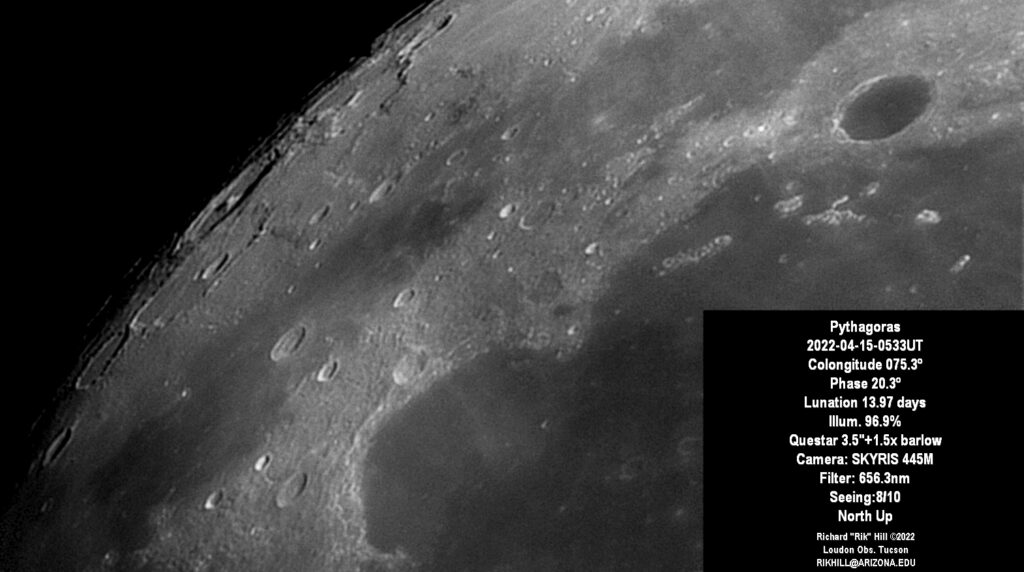 This is a lot more than Pythagoras but our eyes are instantly drawn to that handsome 133km diameter crater seen here on the edge of the terminator. I always like watching the shadow of the central peak as it shrinks on the crater floor with the rising Sun. Because of it’s position near the limb, we can only see one interior wall (western) and have never seen the eastern wall from the Earth. We have seen it from spacecraft and it’s shows this crater to be as magnificent as Copernicus. The large area outlined by the low walls to the lower right of Pythagoras is the equally huge, the ancient Babbage (148km dia.) maybe as old as 4.5 billion years! It was covered over by a lot of the ejecta from the Pythagoras impact. Below Babbage is the well defined Oenopides (70km) and farther Markov (43km).

Above right of Pythagoras is a large irregular area that is Anaxamander 70km diameter for the foreground portion. It is an overlap of about 3 large craters all the rest of which have satellite names (Anaxamander B, Anaxamander X etc.). Farther up is the crater Carpenter (61km) near the upper edge of this image.

Two large commanding features in this image are Sinus Iridum (411km) the large cirque at the bottom of this image. Between this bay or sinus and Pythagoras is the crater Harpalus (41km) sitting in the middle of the west end of Mare Frigoris, which displays a nice radial ray pattern during full moon. The distinctive dark oval in the upper right of the image that is Plato (104km). You might notice a couple of small white dots on the floor of Plato that are several of the small craterlets that are the goal to so many lunar imagers. LROC QuickMap shows the larger craterlets to be 2-3 km in diameter, about the limit for this telescope. Below Plato are the nice island mountains, Montes Teneriffe on the right with Mons Pico the roughly triangular island on the far right end, and the larger elongated mass on the far left that are Montes Recti. The changes in appearance of these mountains are enjoyable to observe during the course of a lunar day.