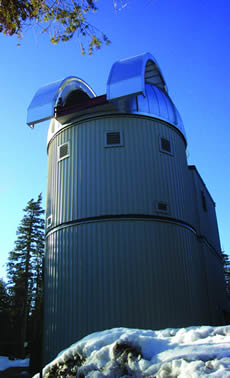 For most of its 125+ years of existence, The telescopes of the Vatican Observatory (V.O.) were located exclusively on Vatican territory, either in Vatican City itself or, starting in the 1930’s, at the Pope’s summer residence at Castel Gandolfo.  However, in the early 1990’s the V.O. built a telescope on Mt. Graham in Arizona, where the skies are much darker and clearer than they are around Rome.  This is the Vatican Advanced Technology Telescope, or VATT.  The name “Advanced Technology” refers to the VATT being one of the first telescopes to be built using a radically compact design and a new technique of telescope-building—things which since then have become much more common in big telescopes.  The VATT is of course not in Vatican territory, and while it is staffed by V.O. astronomers, most of its operating funds come from private sources—such as you, O Reader of The Catholic Astronomer (please click here to support the VATT and the sorts of science discussed here).  The U.S. operation that keeps the VATT running is the Vatican Observatory Foundation—hence the web address for this blog.  The V.O. still has its older instruments at Castel Gandolfo, but they are used mostly for outreach.  The VATT is the V.O.’s research telescope.

Below is a sampling of some recent publications or presentations featuring research that was done using the VATT.  And to explain a few acronymns: “PEPSI” is “Potsdam Echelle Polarimetric and Spectroscopic Instrument”; “NEO” is “Near Earth Object”; “TNO” is “Transneptunian Object”. 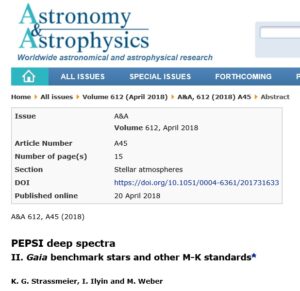 Title: “PEPSI deep spectra. II. Gaia benchmark stars and other M-K standards”
Authors: Strassmeier, K. G.; Ilyin, I.; Weber, M.
Published in the journal Astronomy & Astrophysics, Volume 612 (April 2018)
From the Abstract: High-resolution échelle spectra confine many essential stellar parameters once the data reach a quality appropriate to constrain the various physical processes that form these spectra… We provide a homogeneous library of high-resolution, high-S/N spectra for 48 bright AFGKM stars, some of them approaching the quality of solar-flux spectra…  Well-exposed deep spectra were created by average-combining individual exposures. The data-reduction process relies on adaptive selection of parameters by using statistical inference and robust estimators. We employed spectrum synthesis techniques and statistics tools in order to characterize the spectra and give a first quick look at some of the science cases possible… [T]hese spectra are now made public for further data mining and analysis. Preliminary results include new stellar parameters for 70 Vir and α Tau, the detection of the rare-earth element dysprosium and the heavy elements uranium, thorium and neodymium in several RGB stars, and the use of the 12C to 13C isotope ratio for age-related determinations. We also found Arcturus to exhibit few-percent Ca II H&K and Hα residual profile changes with respect to the KPNO atlas taken in 1999… Based on data acquired with PEPSI using the Large Binocular Telescope (LBT) and the Vatican Advanced Technology Telescope (VATT).

Title: “The Four-Color Broadband Photometry for Physical Characterization of Fast Rotator NEOs”
Authors: Kikwaya Eluo, Jean-Baptiste; Gilmour, Cosette M.; Fedorets, Grigori
Presented at the American Astronomical Society, DPS meeting #48 (2016)
From the Abstract: Fast rotator NEOs, having size in the range of several meters in diameter (H > 22), turn to be very faint. In order to study their physical characterization using photometry, it is required to use a system of filters that covers for each of them a large bandwidth of at least 0.8 micrometers. Traditional and inexpensive Johnson-Cousins broadband filters (B, V, R, I) work efficiently well. 11 NEOs were observed at the Vatican Advanced Technology Telescope (VATT) from 2014 to 2016…

Title: “Two Color Populations of Kuiper Belt and Centaur Objects”
Authors: Tegler, Stephen C.; Romanishin, William; Consolmagno, Guy
Presented at the American Astronomical Society, DPS meeting #48 (2016)
From the Abstract: We present new optical colors for 64 Kuiper belt objects (KBOs) and Centaur objects measured with the 1.8-meter Vatican Advanced Technology Telescope (VATT) and the 4.3-meter Discovery Channel Telescope (DCT). By combining these new colors with our previously published colors, we increase the sample size of our survey to 154 objects. Our survey is unique in that the uncertainties in our color measurements are less than half the uncertainties in the color measurements reported by other researchers in the literature… We are grateful to the NASA Solar System Observations Program for support, NAU for joining the Discovery Channel Telescope Partnership, and the Vatican Observatory for the consistent allocation of telescope time over the last 12 years of this project. 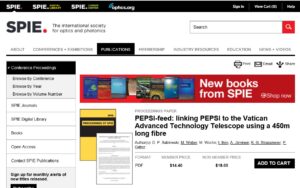 Title: “Discovery, observational data and the orbit of the Transneptunian object (420356) Praamzius”
Authors: Cernis, K.; Boyle, R. P.; Wlodarczyk, I.
Published in Baltic Astronomy, Vol. 25 (2016).
From the Abstract: A project for astrometric and photometric observations of asteroids with the VATT telescope on Mt. Graham is described. One of the most important results is the discovery of the Transneptunian object (420356) Praamzius. We computed its orbit applying 198 optical observations from 2003 February 1 to 2016 January 30… Using a typical albedo value of 0.08 for Centaurs and TNOs, we get a diameter of (420356) Praamzius in the range 302–425 km.

Click here for other posts pertaining to research at the Vatican Observatory.