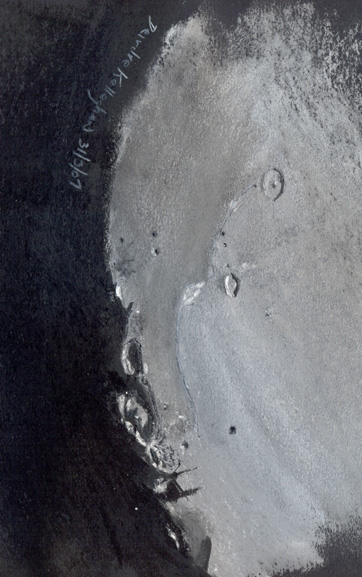 Every time I seek to do a sketch of the lunar surface, there has to be a visual trigger to set me off. On this particular night I was offered one of the clearest steadiest views I have had for a long time. Reiner Gamma, that little bright kite shape on the lunar surface  inspired me to draw. For my moon sketches I use pastel thickly, sometimes several applications one on top of the other. This is deliberate as I can then use certain instruments to almost carve out shapes and liner features. The seeing was good so I was able to use a 2 X Barlow to increase the magnification and my chances for observing detail. Using a Barlow of any kind is rare in Ireland as the atmosphere is often wobbly . Increasing power also magnifies any aberrations in the atmosphere and can frustrate the effort.

With the moon at 97.2% illumination there is only a fraction of terminator left to deal with. Nearly always the targets with the best contrast are showcased on the terminator which is the demarcation line  between day and night on the moon.  However an albedo feature like Reiner Gamma stands out all by itself against the grey lunar surface, and is interesting for that alone.

In my moon sketching box I have some scraping tools, like for metal etching. They are not as tiny as I would like them to be, plus they are also sharp, not ideal for using on a paper surface. However one similar to a needle was ideal for making the fine edges on the ridged outer walls of Hevelius and for that long rille which I observed to run through Oceanus Procellarum into and it seemed out of the little kite. The continuation of the linear marking out of Renier Gamma seemed different and appeared to have similar bright material in places along it.

I first drew in Renier to give me the position of Reiner Gamma. All the while I kept an eye on the Lohrmann, Hevelius, Cavalerius trio as dark shadows ran from them and the suns increasing light gave them new form. They were irresistible so I move on to draw their shapes and took great delight in their rich contrast. Over the years I have learnt to work on features in several places within the field of view. Rotating your time between features helps to keep your drawing balanced and also helps keep things in correct proportion to each other.

Lohrman A and Herman were drawn next, these craters  gave me a kick of point for to sketch in that long line which sweeps up past Reiner Gamma and on toward Marius. Reiner Gamma seemed flat, even though the central region appeared a little duller that its edges which seemed to glow slightly.

Afterwards  I was pleased to notice that I had sketched in crater Galilaei.  A tiny dent in the lunar surface honouring an astronomer who paved the way for lunar understanding in a monumental way. Nearby Aristarchus and Vallis Schroter looked incredible as the seeing improved as the time ticked by towards local midnight.

Reading about Renier Gamma some time later  I discovered it is known as a lunar swirl .  An unusual feature of bright regolith,   a true anomaly with magnetic fields. There is a lot written about swirls but no definitive answers as yet  to their origins.

Often  I draw first and ask questions later stimulated to learn by my observations. I use Virtual Moon Atlas which is a free software to identify features in my drawings.   You can become very familiar with the moon by accessing the data within VMA and even more fully familiar by making attempts to draw our nearest neighbour.  Here is the link :  Virtual Moon Atlas

Recently fellow blogger Christopher Graney wrote an interesting  piece on how drawing exactly what you see is valuable.