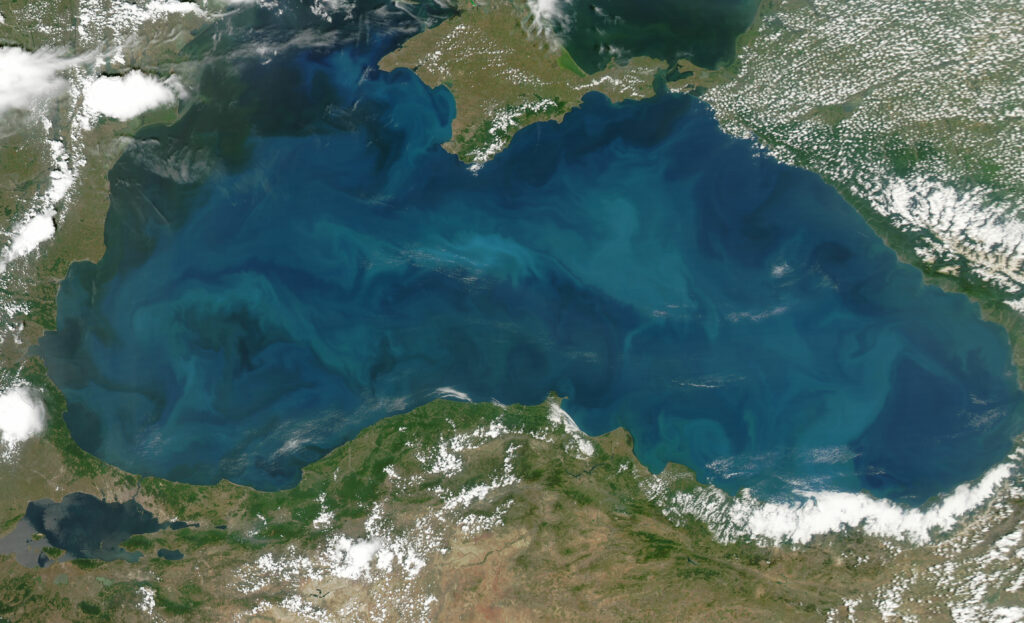 A stunning NASA image of the Black Sea.

What would it take to “kill off” an entire sea? In the late 1990’s, those who depend on the Black Sea for food and the stability of their economy wondered if this question had become reality.

In the 1980’s, the Black Sea was seen by many as a body of water that could feed the world given its abundance of aquatic life. In the late 1990’s, this bountiful sea was being transformed into a kind of “underwater desert.” Fishermen were coming back with empty nets, promising both economic hardship and social difficulties given the region’s dependence upon the Black Sea for food. This shocking turn of events led world leaders to ask a logical question: What happened to this bountiful body of water? 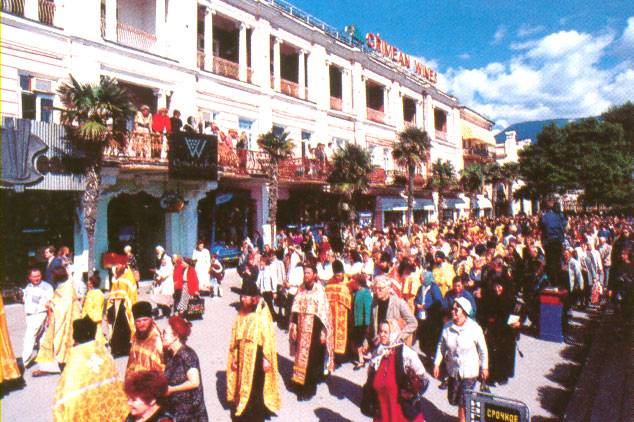 A warm welcome for the 1997 Symposium.

It is no wonder that, in light of this mounting ecological crisis, the Religion, Science, and Environment (RSE) Waterborne Symposium organized by the Greek Orthodox Church met on the Black Sea in 1997. As a follow-up to their 1995 meeting on the Aegean Sea, the 1997 Symposium sought to establish practical solutions to help clean up one of the most environmentally devastated bodies of water in the world.

The centerpiece of the Symposium was a strategic plan of twenty priorities meant to improve the health of the Black Sea. When reading these priorities, it is clear that what was being called for was a fundamental change of thought and practice toward caring for the Black Sea. Whether it be regional politics, industry, tourism, or those who chose to make the shores of the Black Sea their home, all peoples and groups that depended upon the sea were challenged to take greater care of this environment.

In order to accomplish this change of attitude, members of the RSE Symposium called for the development of a shared cosmology that would be used to address ecological issues. As idealistic as this sounds, the participants of the Symposium were quite honest about the difficulty in finding such a cosmological language. In a presentation given by Metropolitan John of Pergamon, he argued that the tensions that are created by the technical languages of faith and science may need to temporarily be separated to avoid driving a wedge between faith and science. However, John also strongly endorsed that the long-term goal for faith and science should be to find a common cosmology.

For centuries scientists and theologians have been using their own, separate, exclusive, esoteric languages. This has made it difficult, if not impossible, for an environmental or ecological language to develop that would involve theologians and scientists at the same time. Technical language may have to remain for internal use on both sides, but when it comes to the environment a common language must be found. For such a common language to develop it will be necessary to work out a conceptual framework shared by both religion and science. We must arrive at a cosmology common to both scientists and theologians and we must also agree on what constitutes knowledge and truth. Agreement will also be necessary on method as well as content. We must stop taking it for granted that theology and religion are about ‘spiritual’ and ‘metaphysical’ realities while science is about ‘material’ matters. The environment is both a spiritual and a material reality. (Science and the Environment: a Theological Approach. Metropolitan John of Pergamon)

As a diocesan priest and pastor from the Christian West, I can’t help but think that it is precisely in the separation of the technical languages of faith and science that a true cosmology can emerge. Instead of finding a common language between faith and science in regard to ecology, could we not see the distinct languages of each discipline providing two necessary filters to understand the one cosmology of which we all participate?

Would keeping the different understandings and languages of cosmology separate actually help better inform one another? Is there a strength when we allow science to focus on asking better questions to measure the human impact upon our environment and faith to ask better questions on how those choices can either promote or do damage to human dignity in our world?

In many ways, when you read the presentations from the Waterborne Symposium, this precise dialogue is on full display. I merely wonder if our longterm goal should not be to create a unified cosmological language between faith and science, but to simply acknowledge the unique gift each brings to the world’s ecological questions to help us better protect our common home?

Discussions about method aside, the reality is that the Black Sea itself provided a powerful backdrop for this dialogue to begin. The sea boarders numerous countries that represent numerous faiths and world views. The Black Sea Symposium was by its very nature an act of “ecological ecumenism” as people of many world views acknowledged a shared responsibility for creation.

It took a decade for the Black Sea to go from a sea of plenty to a watery desert. Since the symposium in 1997, there are signs of recovery along with the lingering effects of the ecological crisis from the 1990’s. With stricter intergovernmental regulations and monitoring, the levels of nitrates and phosphorus introduced into the Black Sea have dramatically decreased. However, there is still much to be done.

May we be inspired by the efforts of these people of faith and people of science who sought to save the Black Sea. May their example inspire us to work together for the common purpose of protecting our common home.