For this entry in the series, we go back in time almost a thousand years, to a period where modern science as we know it had not yet been established. How can we talk about a “religious scientist” before the age of modern science? In this case, by holding up an exemplar who, though not formally a scientist, made significant contributions to our knowledge based on the systematic experimental study of the natural world.

The exemplar I have in mind is Hildegard of Bingen, a Benedictine abbess who recorded, preserved, and disseminated much knowledge about medicine, pharmacology, and plants and animals that served as sources for medicines and remedies. 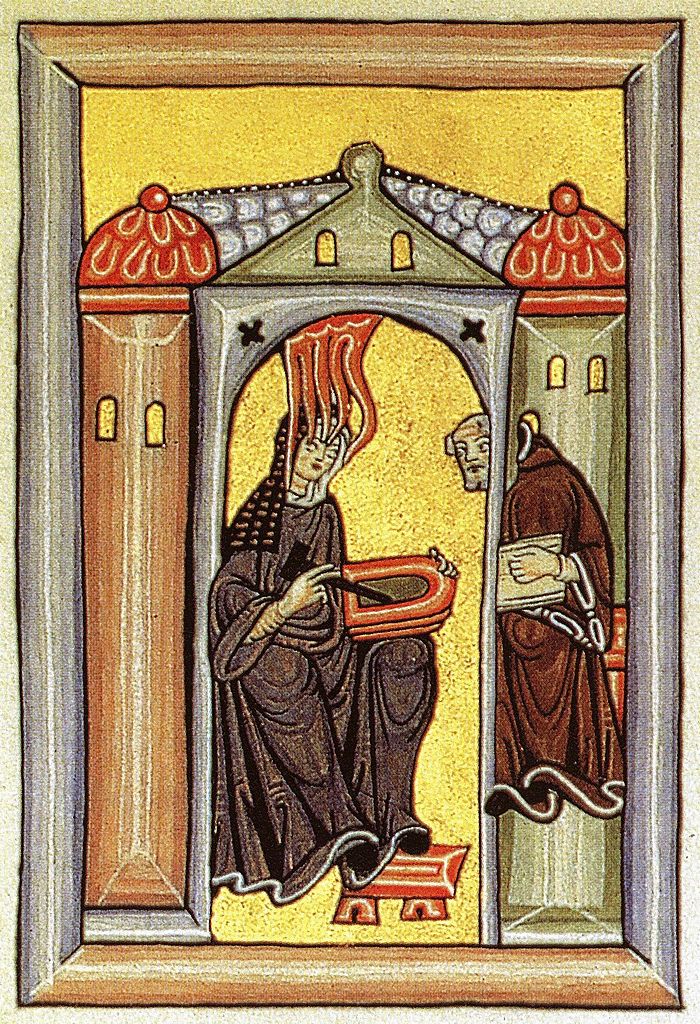 Hildegard was born in 1098, the 10th child in a large wealthy family. At an early age (somewhere between ages 8-12, depending on sources) she was tithed to the Benedictine monastery at Disibodenberg.  There, Hildegard received her education.

It is possible that she served as either infirmarian or pigmentarius (pharmacist) at Disibodenberg, because she developed extensive knowledge of medicines and their uses.  Most of her scientific writings are medicinal in nature.

In addition to scientific contributions, Hildegard wrote musical compositions such as the Symphonia armonie celestial revelationum. She was a mystic who experienced many visions. Her special insights regarding the Gospel of John are explicated in the Liber Divinorum Operum.  She was known as a persuasive and insightful preacher. In total, about four hundred of her written works are still extant.

She founded two monasteries, one in 1150 and another in 1165, and served as abbess of both.

She died in 1179 at the age of 81 “in an odor of sanctity.” Though she had been traditionally referred to as a saint since early after her death, she was not formally canonized until 2012.  In that year, Pope Benedict XVI declared her a Doctor of the Church.

Hildegard was someone who made careful observation and experiment, and recorded the results.  This is the heart of what it means to be a scientist.  Regardless of her many mystical visions and experiences, her work with medicine and the natural world was based on direct observation.

She was part of the 12th century “mini Renaissance” that would lay the basis for developments in the 16th century.  She lived just before Albertus Magnus (1193-1280), another exemplar of a knowledgeable scholar and protoscientist of the era.

She wrote two treatises on medicine: Cause et Cure and Liber Subtilitatum Diversarum Naturarum Creaturarum, and one on natural sciences: Physica. They demonstrate extensive practical knowledge, though some of it comes from outside sources that are a bit fantastical.  (For example, there is a reference to unicorns.)  The treatments and cures themselves are not fictional or invented, but are grounded in practical experience.

They contain an extensive taxonomy of plants and animals. She started to think about evolution of species, though not in the more developed way that would come with Charles Darwin eight centuries later.

She tested several different potential pesticides for efficacy. In her writings, she also talks knowingly about the process of brewing beer, or about the different sources of water and whether they are safe to drink. (E.g. well water is better than spring water, and water from swamps or rivers should be boiled before drinking.)

Doctor of the Church

On May 10, 2012, Pope Benedict XVI declared Hildegard a Doctor of the Church, the fourth woman to receive that distinction after Catherine of Siena, Teresa of Avila, and Therese of Lisieux.

In the apostolic letter declaring her a Doctor of the Church, Pope Benedict wrote that “the profound spirituality of her writings had a significant influence both on the faithful and on important figures of her time and brought about an incisive renewal of theology, liturgy, natural sciences and music.”  He holds her up as an example for women, not least as a scientist; “For these reasons the attribution of the title of Doctor of the Universal Church to Hildegard of Bingen has great significance for today’s world and an extraordinary importance for women. In Hildegard are expressed the most noble values of womanhood: hence the presence of women in the Church and in society is also illumined by her presence, both from the perspective of scientific research and that of pastoral activity. Her ability to speak to those who were far from the faith and from the Church make Hildegard a credible witness of the new evangelization.”

The asteroid (898) Hildegard is named for her, and there is a crater on the far side of the Moon that bears her name.

Many thanks to Michelle Francl-Donnay for providing material that helped in the writing of this piece.