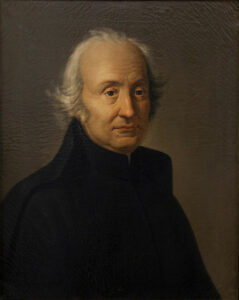 Today, just under 800,000 asteroids and Trans Neptunian Objects are known and catalogued by the Minor Planet Center of the Smithsonian Astrophysical Observatory, with more being discovered every day.  However, before 1800 the existence of this entire class of objects was entirely unknown. The first asteroid, which today we know as (1) Ceres, was discovered by an astronomer who was also a priest: Fr. Giuseppe Piazzi C.R.

Giuseppe Piazzi was born July 16, 1746 in Ponte in Valtellina, Italy.  He entered the Theatine order in 1765, and was ordained a priest in 1769.  While he taught philosophy, theology, and mathematics at various stages of his early life in the order, he also had an interest in astronomy.

He came to Palermo in 1781 as a lecturer in mathematics at the Accademia dei Regi Studi. In 1787, he became professor of astronomy. King Ferdinand of Sicily named him to be the first director of the Palermo Astronomical Observatory. 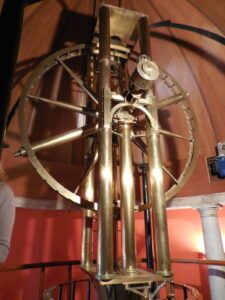 He obtained funding to build the observatory atop the royal palace. He then spent the next few years traveling to other observatories to prepare for the construction of the new observatory and to build his own astronomical skills. His travels took him to Paris and London.  In England, he encountered the renowned instrument maker Jesse Ramsden, from whom he commissioned a telescope for the observatory.

He returned to Palermo in 1790, at which time the observatory was officially founded.  In 1801 he discovered the asteroid Ceres.

In 1817 he was relocated to Naples to oversee the Capodimonte Observatory, at which time he was named general director of the Naples and Sicily Observatories.

Piazzi’s most notable contribution was the discovery of the asteroid (1) Ceres.

At that time, the existing model of the solar system included the Titius-Bode law of the relative distances from the planets to the Sun.  However, in the pattern of the Titius-Bode law there existed a gap between the orbits of Mars and Jupiter that suggested that there should be a planet orbiting at a distance of about 2.8 AU.

(It should be noted that the Titius-Bode law seems to be nothing more than a coincidence. Planetary systems around other stars do not conform to the “law,” and when the planet Neptune was discovered it did not fit the pattern either.) 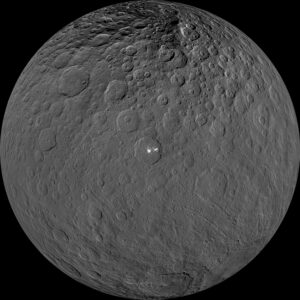 (1) Ceres as photographed by the Dawn spacecraft. (Source: NASA/JPL-Caltech/UCLA/MPS/DLR/IDA)

On January 1, 1801, using the Ramsden Circle telescope, Piazzi observed an object that moved against the stellar background.  He reported it as a comet, but was not convinced because there was no sign of outgassing that accompanies comets.

The object was lost in solar glare before its orbit could be computed, but was relocated later. When its orbit was finally calculated, it was found not to be consistent with a comet. Also, with a semi-major axis of 2.77 AU, it was right where the “missing planet” of the Titius-Bode law should be.  Piazzi named this new object “Ceres Ferdinandea,” but the “Ferdinandea” part was dropped later.

Ceres is now classified by the IAU as a dwarf planet, putting it in the same category as Pluto.  It was visited by the Dawn space mission in 2015.

Piazzi’s major work at the observatory was supervising the Palermo Catalog of stars. This was a systematic study of more than 7600 stars, whose positions were measured to high precision.  He used the study to search for stars that would be good candidates for measuring stellar parallax.

There is a lunar crater named for Piazzi, as is the asteroid (1000) Piazzi.  There is also a feature on Ceres that has been informally given the moniker Piazzi.

Special thanks to Ileana Chinnici of the Astronomical Observatory of Palermo / INAF for providing some resources for this post, and for hosting my visit to the observatory in 2015.