Many thanks to Dominique Lambert, who provided me with several articles and a full biography that were used to create this post.

Georges Lemaître was a priest of the diocese of Louvain, in Belgium.  The proposer of what would become known as the Big Bang Theory was one of the more influential astrophysicists of his lifetime.  Albert Einstein even once skipped one of his own public appearances in order to converse with Lemaître over deep cosmological problems. 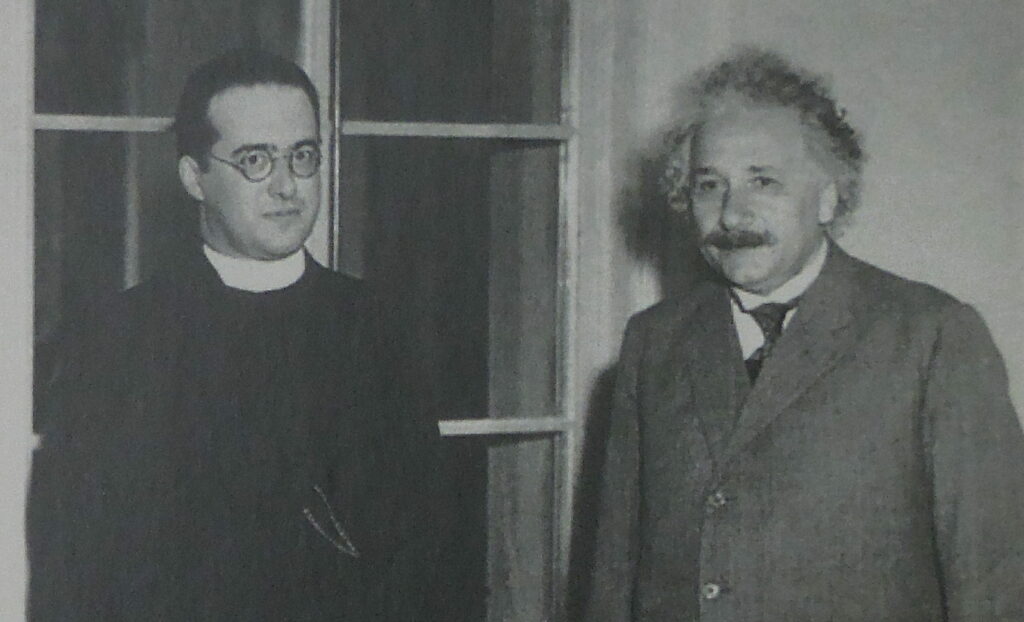 Georges Lemaître was born July 17, 1894 in the mining town of Charleroi, Belgium.  He studied at the Jesuit school Collège du Sacre Coeur, and then prepared to study mining engineering, as was typical of bright students in the area. With the advent of World War I, he enlisted and served with the artillery, where he received a formal reprimand for correcting an error in the artillery manual. After his discharge, he decided to study physics and mathematics.

With a fellowship to study abroad, he went to Cambridge University for a year, where he studied under Sir Arthur Eddington and developed an interest in cosmological models in Einstein’s general relativity.  Then, after a brief stint in Canada, he went to the Harvard College Observatory to continue his studies with Harlow Shapley.  Since the Harvard Observatory did not have a PhD program, he registered at the nearby Massachusetts Institute of Technology (MIT) [my alma mater!], where he completed his doctorate.

In 1925, Lemaître learned of Hubble’s measurement of the distances to several galaxies, which confirmed that they were outside the Milky Way.  Visiting Caltech, he learned about cosmic rays from Milliken. On a visit to the Lowell Observatory, he also learned of redshift measurements to galaxies.

Combining these data led to his 1927 paper in which he posited his model of the expanding universe from a primordial atom, with a section in which he proposed a velocity-distance relationship between the galaxies due to this expansion. The paper was originally published in Belgium, in French. In 1929, Hubble published his own velocity-distance relationship, which became known as Hubble’s Law.

With the help of Eddington, Lemaître’s paper was republished in English in 1931. The paper, with its cosmological model of the “primordial atom,” established his fame as an astrophysicist. However, Lemaître omitted the part with the velocity-distance relation because he considered the data to be outdated and inaccurate.  Thus, Hubble continued to receive all the credit for that law until recently.

His priestly life was also quite active.  Though a diocesan priest, he was a member of a priestly fraternity Amis de Jesus, and had pronounced vows of poverty, chastity, and obedience. His commitments included an hour of private prayer daily and an annual 10-day silent retreat. While at Harvard/MIT, he was a regular celebrant at St. Paul’s. Back in Louvain, he was heavily involved in chaplaincy to Chinese students. (He had learned Chinese several years before). 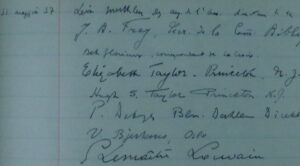 Lemaitre’s signature in the Vatican Observatory guest book, 31 May 1937, along with Hugh Stott Taylor, Peter Debye, and others. This was the day before the formal inauguration of the Pontifical Academy of Sciences on 1 June 1937.

In 1936, Lemaître was one of the foundational members of the Pontifical Academy of the Sciences, and he would become its president in 1960.  He was present at the 1951 meeting of the Academy when Pope Pius XII said that the science of the day “has succeeded in being a witness to that primordial Fiat Lux.”  Lemaître had a healthy respect for the autonomy of science from theological considerations and was aware of the perils of equating the hypothesis of the primordial atom with the theological moment of Creation, both for science and for theology. With the help of Fr. Daniel O’Connell SJ (director of the Vatican Observatory), he intervened with the Pope in 1952 to prevent any formal declaration of his theory as evidence for Biblical Creation. 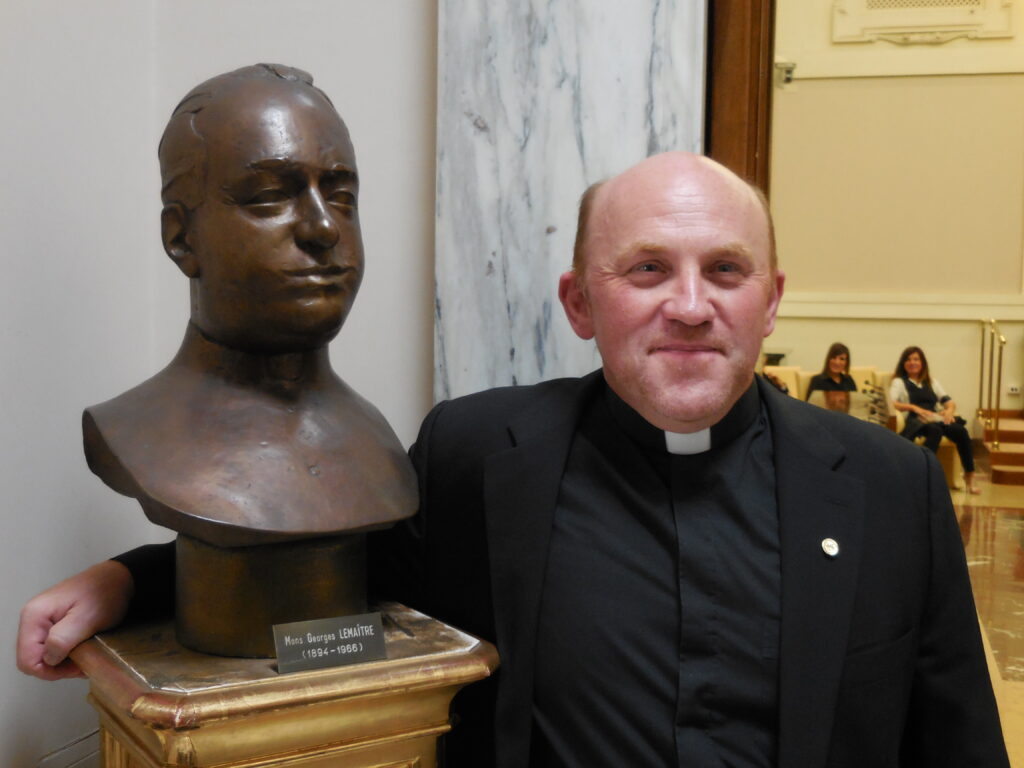 Bust of Georges Lemaitre at the Pontifical Academy of Sciences (with Fr. Gabriele Gionti SJ of the Vatican Observatory)

Georges Lemaître suffered a heart attack in 1964, and was rehospitalized in June of 1966. In the hospital, his friend Odon Godart informed him of the discovery by Penzias and Wilson of the Cosmic Microwave Background, which confirmed the theory of the expansion of the universe from the Big Bang.  Days later, on June 20, 1966, he died.

Lemaître’s key scientific contribution was the hypothesis of the primordial atom, what has become known as the Big Bang theory.  He had a remarkable ability to synthesize information and carry it further. His cosmological model came directly from Einstein’s equations, and combined the solutions of Einstein and de Sitter. This hybrid model started in a completely filled, homogeneous, static state (the “primordial atom”), expanding from there toward a perpetually expanding final state moving toward zero mass density.

He was not the first to develop this solution to the equations; the Russian physicist Alexander Friedmann proposed the same mathematical solution several years before. However, Lemaître was the first the see the cosmological implications of this solution, and to connect it with astronomical data. He also considered the expansion of the universe (two years in advance of Hubble’s work on the topic) and estimated the age of the universe based on that.  From various considerations, he estimated it must be between 10-100 billion years old.

While Lemaître’s solution was derived scientifically, from the equations and astronomical observations, his primary detractors tended to base their objections on anti-theological grounds.  Detractors such as Fred Hoyle insisted on a static, infinitely old universe. A universe that had an origin in time implied for them a Creator, which they were not willing to consider.  Hoyle even created a joke name for the theory to diminish its importance. He called it the “Big Bang theory.”  (I should note that despite their disagreements, Lemaître and Hoyle were friends and even went on vacation together!)

Lemaître’s specific solution–which paused its expansion for a bit to form galaxies before expanding further–was dependent on the existence of a non-zero cosmological constant.  Einstein had attempted to discard the cosmological constant after it was discovered that the universe was not static, but Lemaître continued to advocate for its inclusion. In recent years, with the discovery that the expansion of the universe is accelerating, it would seem his advocacy has been vindicated.

His cosmological theory also fed Lemaître’s interest in high-energy cosmic rays, the origins of which were unknown.  He hypothesized that cosmic rays were the result of the disintegration of the primordial atom.  This hypothesis was ultimately disproven, but his interest led to several contributions to the understanding of contributions and their interaction with the Earth’s magnetic field.

Lemaître made several contributions in mathematics.  He contributed to the theory of spinors for the use of physical calculations.  He also was interested in numerical methods for solving complicated equations. He developed many mathematical methods to aid in the calculation of numerical solutions.  One such technique was effectively the same as the Fast Fourier Transform, which came several decades later.  Even though the taught the method to his students, who in turn taught it to theirs, he never published it.

He also was an early proponent of the use of calculating machines to aid in finding numerical solutions to physical problems.  As early as the 1930s, he made use of the differential analyzer of Vannevar Bush at MIT.  At Louvain, he founded the Laboratory of Numerical Research, the first computer laboratory in Belgium.  With his nephew Gilbert, he developed a computer language called AUTOCODE.

Lemaître also contributed to the three-body problem in physics by finding a coordinate shift that simplified the calculations.

There is a lunar crater named for him, and also the asteroid (1565) Lemaître.  The ESA’s unmanned Automated Transfer Vehicle 5 (ATV-5), launched to the International Space Station in 2014, was named Georges Lemaître.

The Friedmann-Lemaître-Robertson-Walker metric in general relativity bears his name.

In 2018, the International Astronomical Union voted to add Lemaître’s name to the Hubble Law of the expansion of the universe. (You can read our blog post about the Hubble-Lemaître Law.)

For further reading: Dominique Lambert. The Atom of the Universe: The Life and Work of Georges Lemaître.(Krakow: Copernicus Center Press, 2015)