There is new thing on the Vatican Observatory Faith and Science archive!  We have added a new section—“Religious Scientists”.  We mean “religious scientists” in a broad sense: scientists who are people of faith, believers in God.

There are two parts to this new section.  The first part is a listing of different scientists whose work is featured in the archive.  For each scientist, there is a link that takes you to the different entries in the archive related to that scientist.  Some of the scientists in the listing are well-known—Isaac Newton, for example.  Others are not so well known—William F. Rigge, S.J., for example. 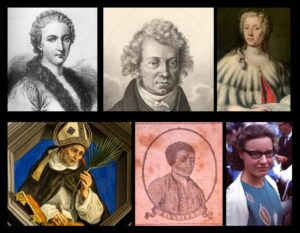 It is important to understand that both parts are listings of religious scientists, not saintly scientists.  Scientists are not always saintly.  Scientists are also often independent-minded and confident of their own views, so sometimes even very faith-filled scientists will find themselves at odds with their fellow believers.  Isaac Newton is one such example.  He is arguably the greatest of all scientists, but he actually wrote more on religion that he wrote on science.  His faith was deep.  But he tended to keep his religious ideas to himself, as his own ideas about the nature of the Trinity were unorthodox, and definitely not in line with his fellow Anglicans.  And, of course, he was prone to thinking that his ideas were right!

Of course I find all the work on of the Vatican Observatory and Vatican Observatory Foundation interesting and valuable, but I take particular interest in material like the “Religious Scientists” section.  This is because of my work in a community college, where I deal with students from so many different backgrounds.  I have discussed in this blog the problem of reaching religious students who come into a science class very wary of science, owing to what they have heard about science being opposed to their faith.  This wariness is a barrier to their learning science.  But at the same time, these same students have a great potential to learn and contribute: their wariness arises from the fact that they actually care about what they are learning (as opposed to the many, many students who simply take a science class because “it is required”, and who care little about science at all); but unlike the other group of students who care and have great potential to learn and contribute (namely, those students who really love science), these wary students have a skepticism of science that prompts them to ask the best, most probing questions.  And what does a great job of breaking down the barrier and dissolving the whole “science-religion” mythology, whether it be for my students or maybe for someone reading this blog post?  Scientists who were religious believers themselves!