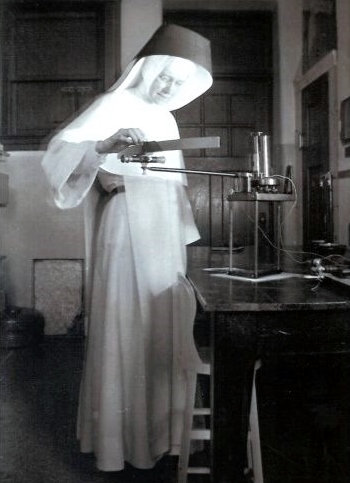 In 1962, Francis Crick, James Watson, and Maurice Wilkins received the Nobel Prize for discovering the double-helix structure of the DNA molecule.  This work could not have been done without the discoveries of numerous other scientists, many of whose contributions have gone unrecognized. One such unsung hero in the quest for the building blocks of life was a Catholic nun at a humble Michigan university: Sr. Miriam Michael Stimson, O.P.

Marian Emma Stimson was born into a devout Catholic family in Chicago on December 14, 1913. She attended Sienna Heights College in Adrian, Michigan. In 1935, she joined the Adrian Dominican Sisters, taking the name Miriam Michael.

She received a B.S. in Chemistry from Siena Heights College in 1936. She continued her studies at the Institutum Divi Thomae in Cincinnatti, where she received her M.S. in 1939.

She then joined the chemistry faculty at Siena Heights College, simultaneously working toward her Ph.D. at Institutum Divi Thomae, which she completed in 1948.

She remained at Siena Heights College for most of her career, except for a stint at Keuka College in New York between 1969 and 1978. She started an undergraduate research program at the university. She chaired the chemistry department from 1948-1968 and served as director of graduate studies from 1978-1991.

Much of Stimson’s academic career involved using spectroscopy to study the chemistry of amino acids and other organic molecules pertinent to biology. A member of the modern scientific culture, she published countless articles in respected journals, many of them with several coauthors.

She developed a technique of using potassium bromide (KBr) to prepare the amino acids and other molecules under study.  The KBr was transparent to the infrared wavelengths used in her spectroscope, providing a significant improvement over previous oil-based preparations.

With this technique, she studied the structure of DNA. At the time, it was thought that the nucleotide bases (ACGT, or adenine, cytosine, guanine, and thymine) were located on the outside of the DNA molecule, but Stimson was able to determine that they were interior to the structure. (Today, we think of them as the “rungs” of the helical ladder.)

Earlier in her career, Stimson also studied cancer (one of the motivations that led to the study of DNA.) She also studied wound-healing hormones.  This led to the development of an ointment that is known today as Preparation H.