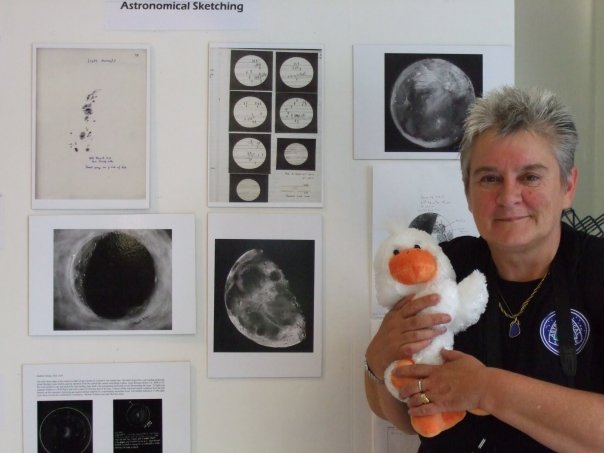 On display behind me are some of my astronomical drawings, along with Sir Patrick Moores, Jane Houston Jones, Michael Portuesi and Bill Crispeno. ALCON 2009 Hofstra University New York

When viewed from 37.000 feet, the landscape of Canada was laced with thousands of steel blue pools. Meandering river channels etched life into a combat green background. Shoals of puffy cumulus raced beneath me in several layers, of white and grey. The Air Lingus shamrock tipped wing sliced through the atmosphere toward a New York landing. I was on my way to Hofstra University to take part in ALCON 2009.

The Astronomical Leagues Convention was organised by the Amateur Observers Society of New York. This week some images popped up in my memories on Facebook. I don’t seem to have written much about it before, it was I guess before blogs were popular. The trip was one of the highlights of my life a real full-on fun experience.

I was invited to do three things, my workshop called Deadly Moons for local children. Another was a talk on the subject of Astronomical Sketching. In addition I also gave a talk about Galileo. The Amateur Observers Society of New York were very good to me on the trip. I stayed with Linda Prince and her husband just outside New York. Linda and others from the Society drove me everywhere; I needed to go or choose to go.

My drawing workshop Deadly Moons went down very well with  the children who arrived to take part. From time to time one set of parents have sent me reports on their child’s educational progress which she linked to his taking part in the workshop. I brought some of the childrens drawings back to Ireland with me for to exhibit in Birr Castle, Blackrock Castle Observatory and Dunsink Observatory.

I also brought over with me a few prints of astronomical drawings.  It was impossible to bring originals or prints in frames therefore they were mounted on card. The society members helped me to put them on display. Sir Patrick Moore had supported an exhibition I had developed that year by allowing me to exhibit some of his work. Jane Houston Jones had supported my workshops over the years with NASA educational materials. Herself and Micahel Portuesi had both sketched the Bubble Nebula. Their work was printed side by side on the same sheet. Bill Crispino was I think part of the New York society therefore his sketch was also included. In addition childrens drawings from Deadly Moons were on display.

One day we visited the outstanding Guggenheim Museum where I saw an exhibition of drawings by Frank Lloyd Wright.  Linda Prince and Stu Parker from New Zealand accompanied me. We had a hot dog picnic in Central Park before heading to Ground Zero. Later that evening  I was happy to join in Music Under the Stars, a public star party at an Irish Concert in Massapequa. We viewed the moon and Jupiter in a variety of scopes. I gave away Eyes in the Skies DVDs from ESA to people attending.

At their last night gala dinner, I was presented with The Astronomical Leagues Master Outreach Award. One of 25 given out that year, my first international one. It was presented by the late Dr Mike Reynolds Outreach Chair for the League at the time. I do not do outreach for awards; nevertheless, it was nice to get one.

In these challenging times, it is nice to stumble upon a truly good memory.

Altogether this generosity by the society resulted in diverse and exciting experiences for me. I have made a list of some of them here as there were so many in a short time.

Biggest shock – The size of the empty space at ground zero

Most satisfying – The cross-cultural success of Deadly Moons

Most interesting – Hayden Planetarium and The Natural History Museum

Very classy – The collection of Poetry given to all at the Star B Que compiled by Robert Chapin published by Harvey Miller.

Enjoyed – The people, the friendships, the children, the heat, the scopes, the city, the transport, the food, the laughing, the learning, the fun.

Biggest giggle, the role-playing I took part in at Vivian Whites workshop.

The biggest surprise: Upgrade to Premier Class on the way home, champagne in crystal glasses, real food on an actual plate, fantastic stuff. It was arranged as a total surprise by one of my hosts. !!!

The list is truly endless, had a super time. Sky and Telescope did a write up at the time click here