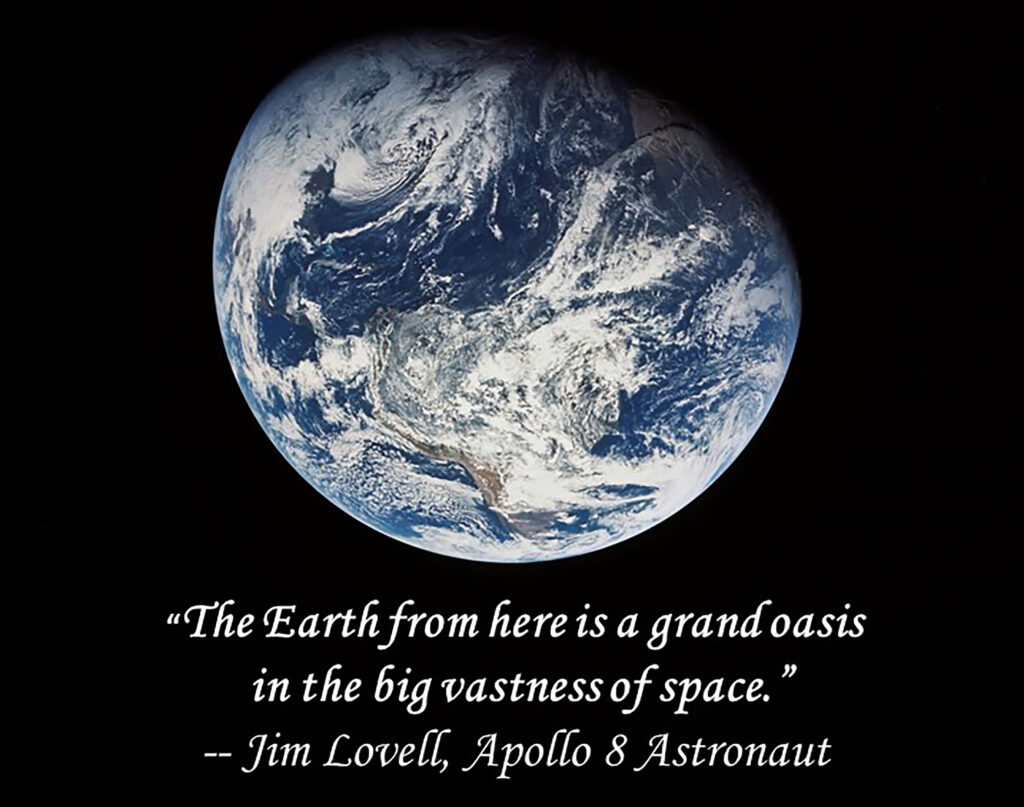 Christmas Eve 2018 marks the 50th anniversary of the Apollo 8 mission, which put humans into orbit around the Moon for the first time. From lunar orbit, an image of the Earth rising over the limb of the Moon was taken; “Earthrise” went on to become one of the most influential photographs of the space age, gracing the cover of TIME Magazine, and a U.S. postage stamp.

On December 24, 1968, with the surface of the Moon rolling-by outside their windows, the Apollo 8 astronauts read the first 10 verses of Genesis to the largest broadcast TV audience in history (at that point in time). 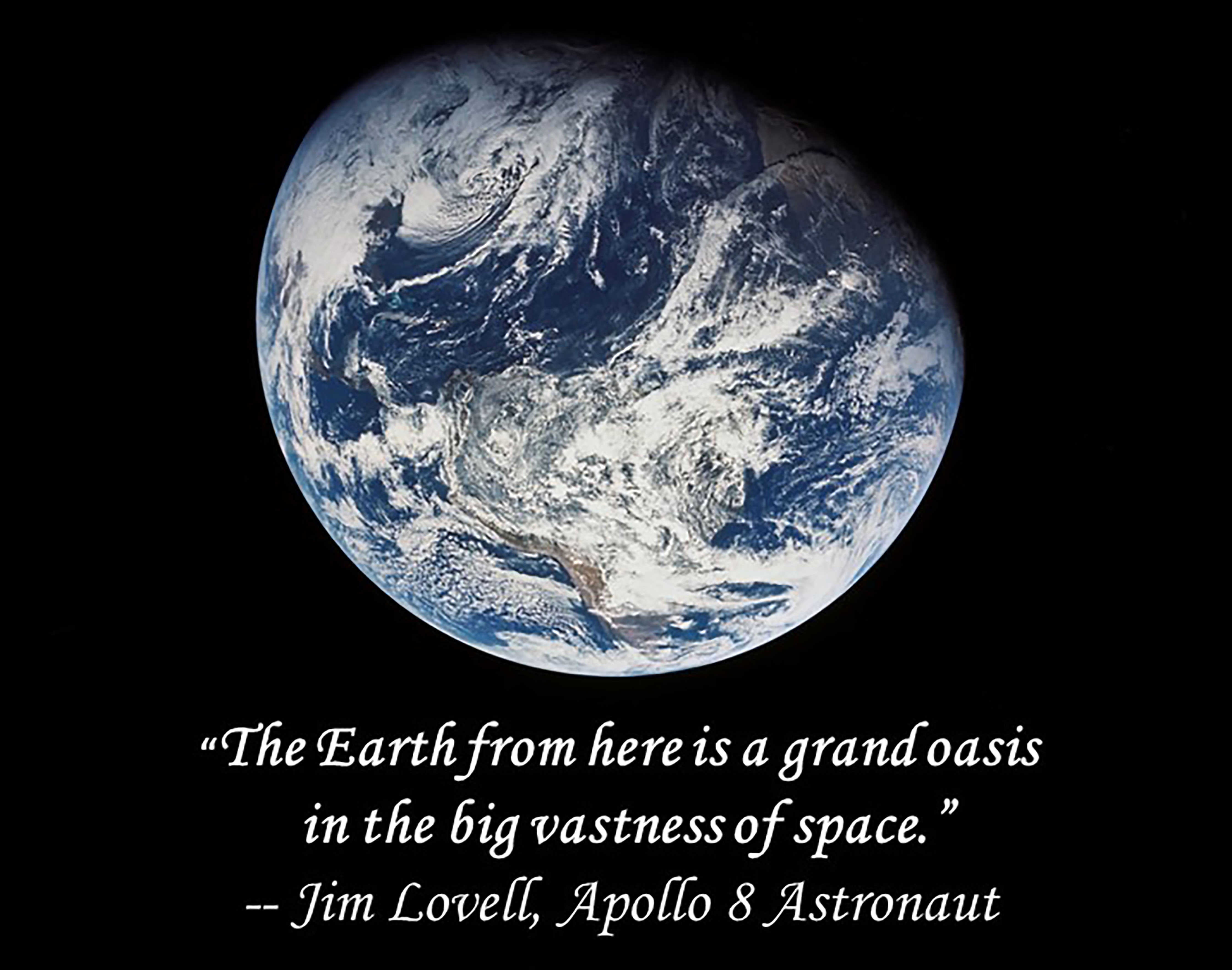 Frank Borman, Jim Lovell and Bill Anders looked back after leaving Earth orbit for the Moon. This view extends the northern hemisphere to the southern tip of South America. Nearly all of South America is covered by clouds. Credit: NASA

The year 1968 saw terrible tragedies, including the assassinations of Robert F. Kennedy and Martin Luther King Jr., and the riots in Detroit. It’s fair to say that regardless of one’s religion, the Christmas message from Apollo 8 commander Frank Borman, command module pilot Jim Lovell, and lunar module pilot Bill Anders, brought a message of hope and peace amidst great turmoil.

Using photo mosaics and elevation data from the Lunar Reconnaissance Orbiter (LRO), this video commemorates the 45th anniversary of Apollo 8’s historic flight by recreating the moment when the crew first saw and photographed the Earth rising from behind the Moon. Narrator Andrew Chaikin, author of A Man on the Moon, sets the scene for a three-minute visualization of the view from both inside and outside the spacecraft accompanied by the onboard audio of the astronauts.
I simply LOVE this video – Bob T.

I was a young boy (8) when the Apollo 8 mission occurred; I was just getting into astronomy at that time, and I was a complete fanatic about the space program. I was glued to a 13-inch black-and-white TV for the entire mission! Going-to and returning-from the Moon takes days – one of the things I remember during all the Apollo missions was “the awful waiting…”  The time it took to travel between the Earth and Moon simply drove me crazy!

I also remember watching a lot of Walter Cronkite – there was something special about that man! It is impossible for me to think about the Apollo era without also thinking about Walter Cronkite. 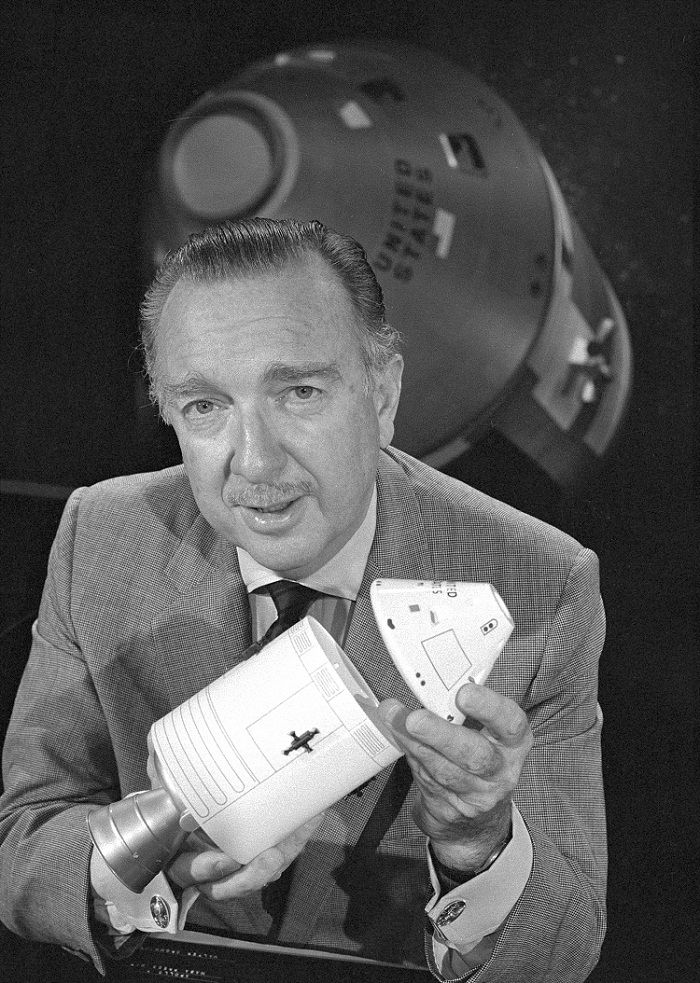 This video recreates the entire Apollo 8 mission with a wonderful blend of original CBS footage and animations, mission control and command module recordings, and gorgeous footage from Kerbal Space Program.

Bringing the Thrill of Apollo to the Next Generation

Today, 50 years after the flight of Apollo 8, you can build and fly rockets in the comfort of your home or school, without all the associated hazards of space flight like: cosmic rays, solar radiation, faulty oxygen tanks, faulty reentry shielding, and unexpected explosive disassembly! Kerbal Space Program is space program simulator available for the PC/MAC/Linux; the developers of KSP are partners with NASA, and for good reason – playing KSP, you’ll learn a lot about how rockets work, and how space travel and space exploration is accomplished. 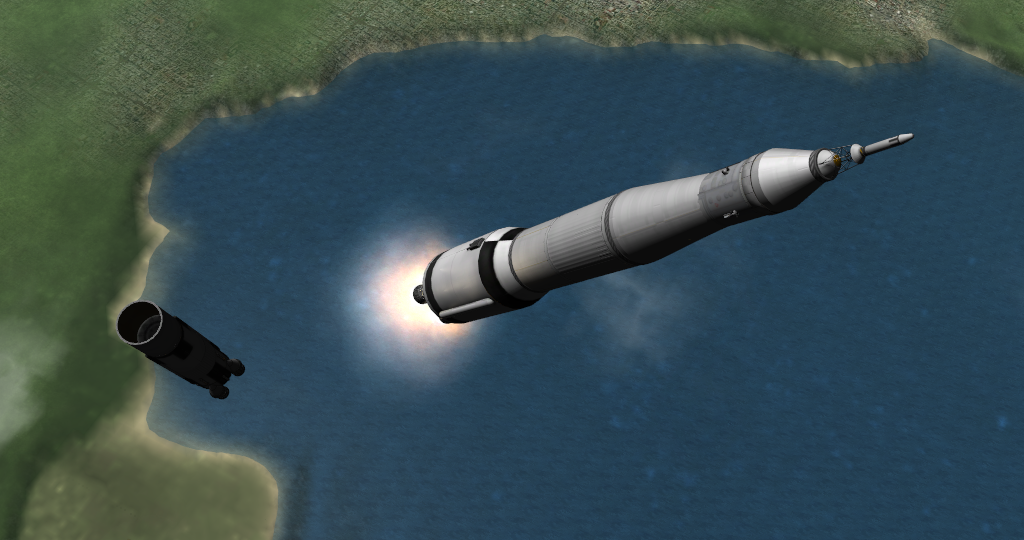 My wife and I run an after-school astronomy and space science club – KSP is very popular with our students. Without you even realizing it, KSP will teach you basic orbital mechanics; the image below shows a Hohmann transfer orbit in KSP – the trans-lunar injection maneuvers Apollo astronauts performed were very similar to this.

The image below shows a spacecraft immediately after having entered into the gravitational “sphere of influence” of the Moon (blue line), and the maneuver node where the spacecraft will perform an engine burn for lunar orbit circularization (yellow dashed line) – similar to what the Apollo astronauts would have had to do.

I remember the first time I saw the home planet rising over the limb of the Moon (it’s called Mun in KSP) – I had the very same “Oh WOW!” reaction the astronauts expressed in the 45th anniversary video above. 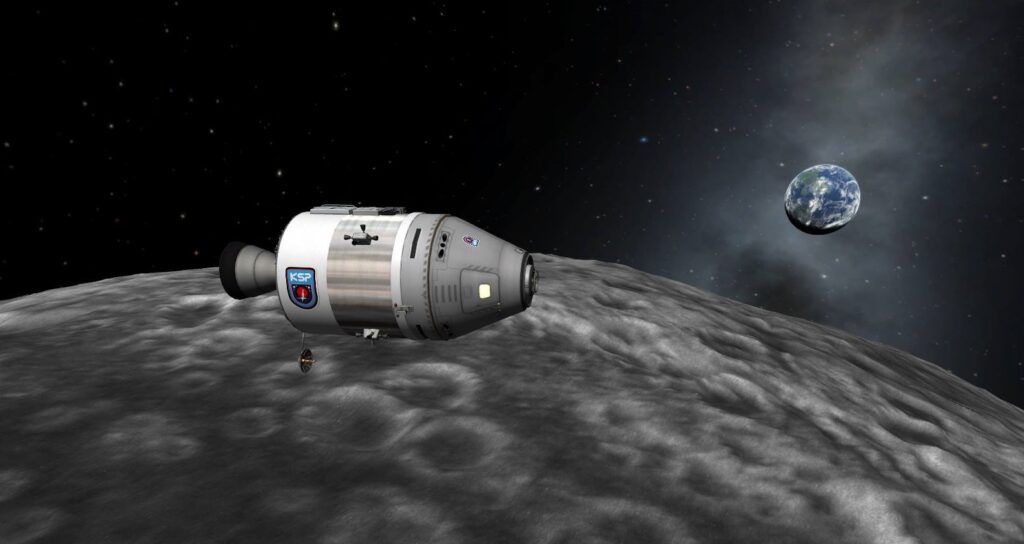 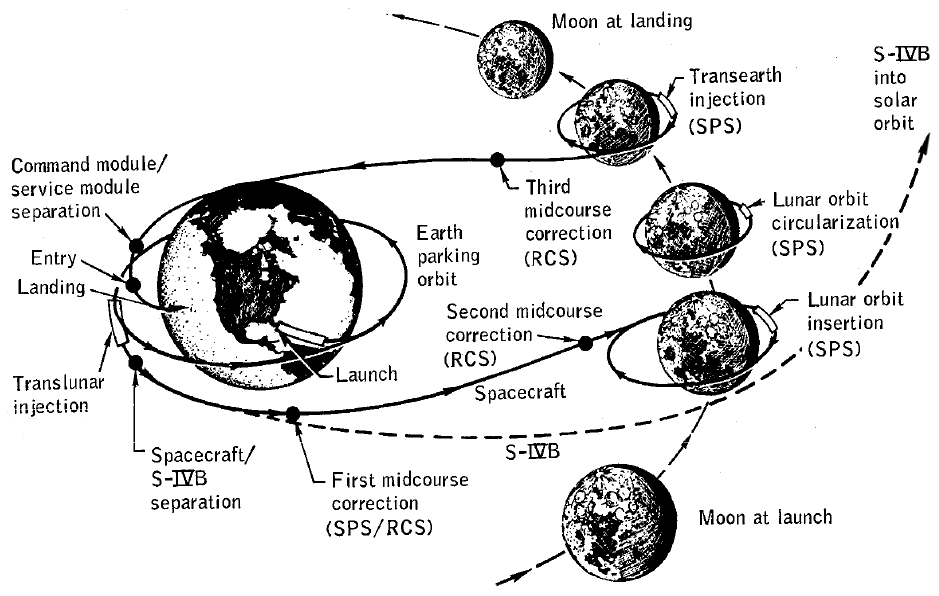 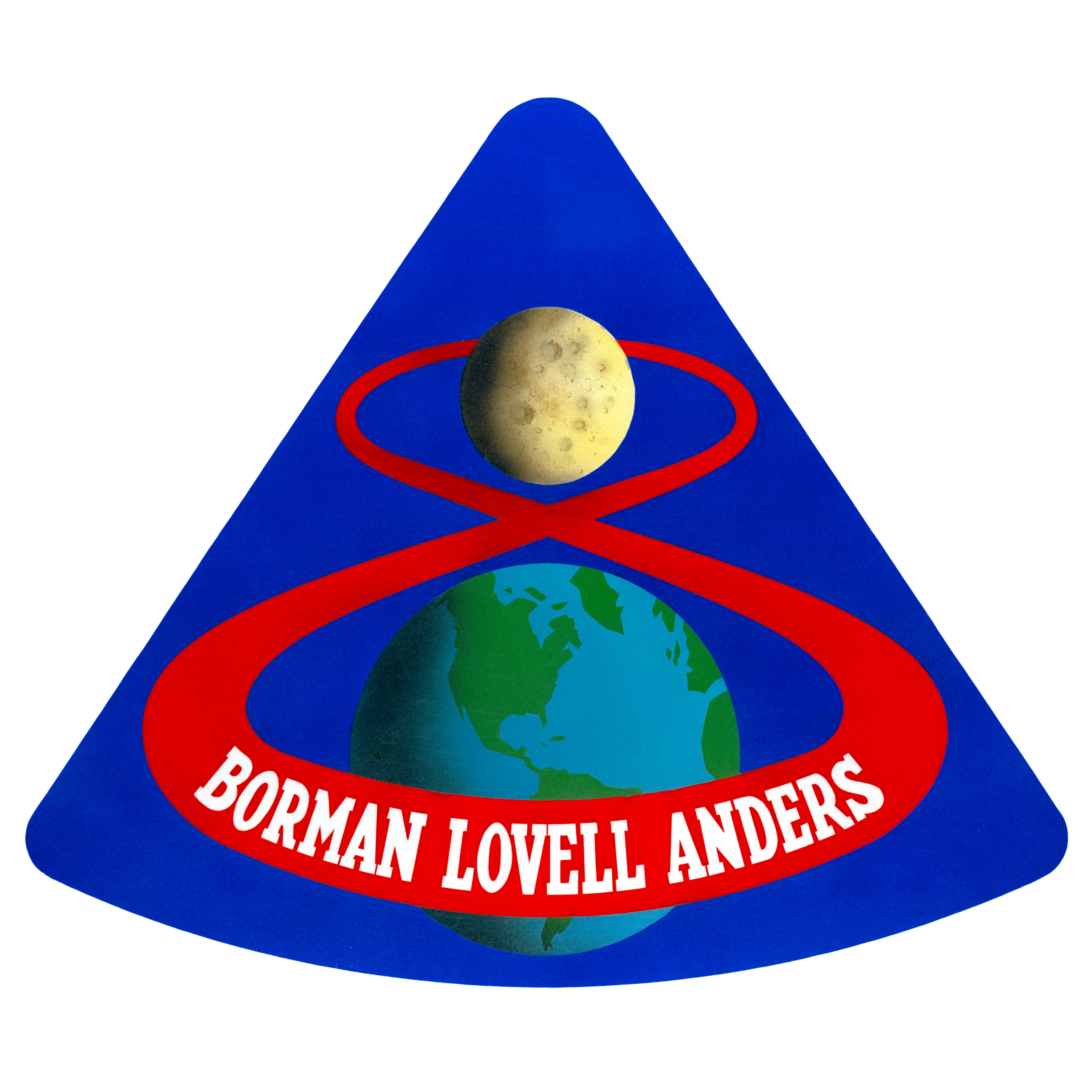 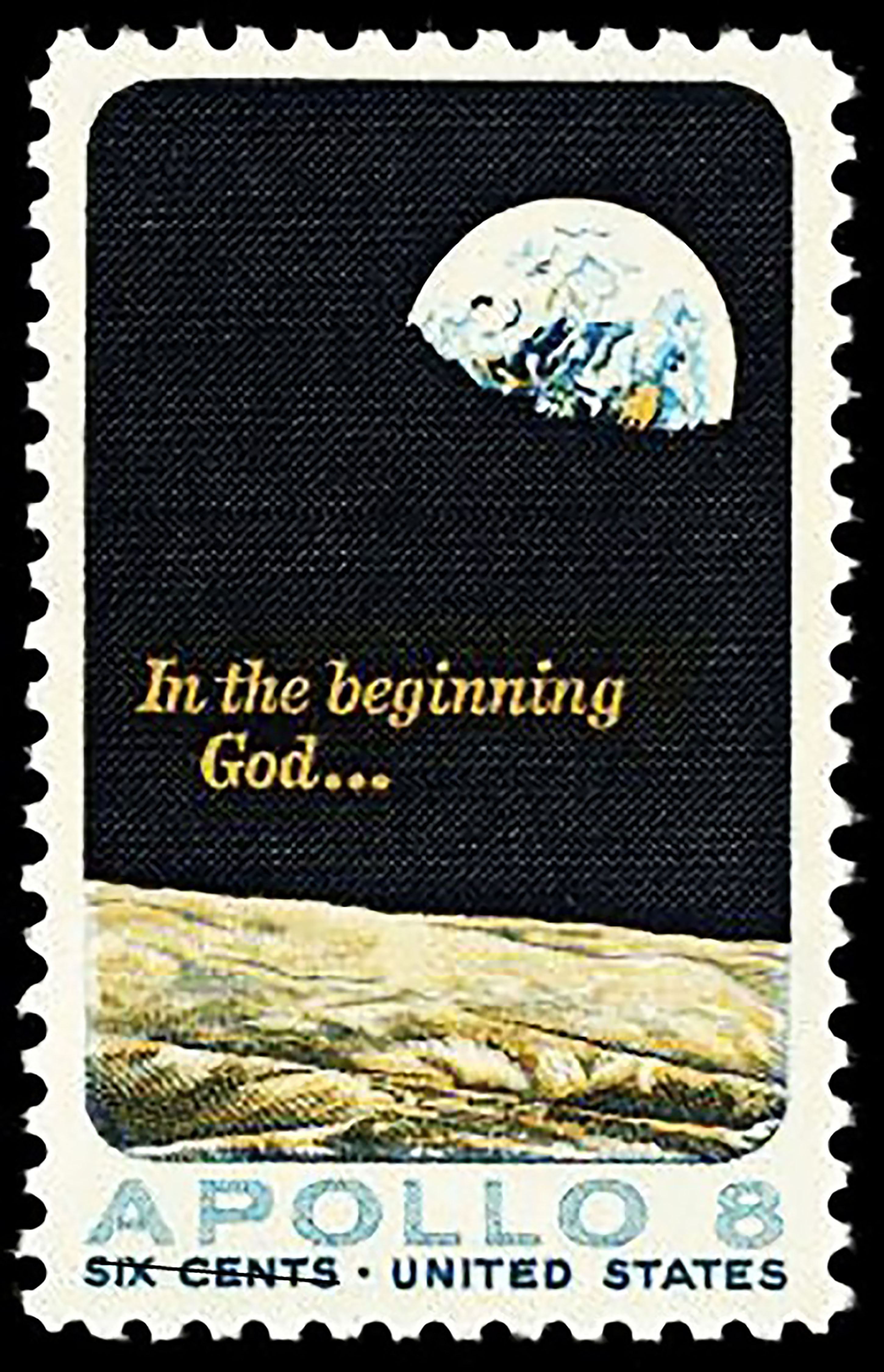 The United States Postal Service issued a commemorative stamp celebrating Apollo 8. The design is based on the photograph taken by astronaut Bill Anders on Dec. 24, 1968. The inscription recalls the crew reading the opening verses of the Bible’s book of Genesis during a live television broadcast. Credit: U.S. Postal Service 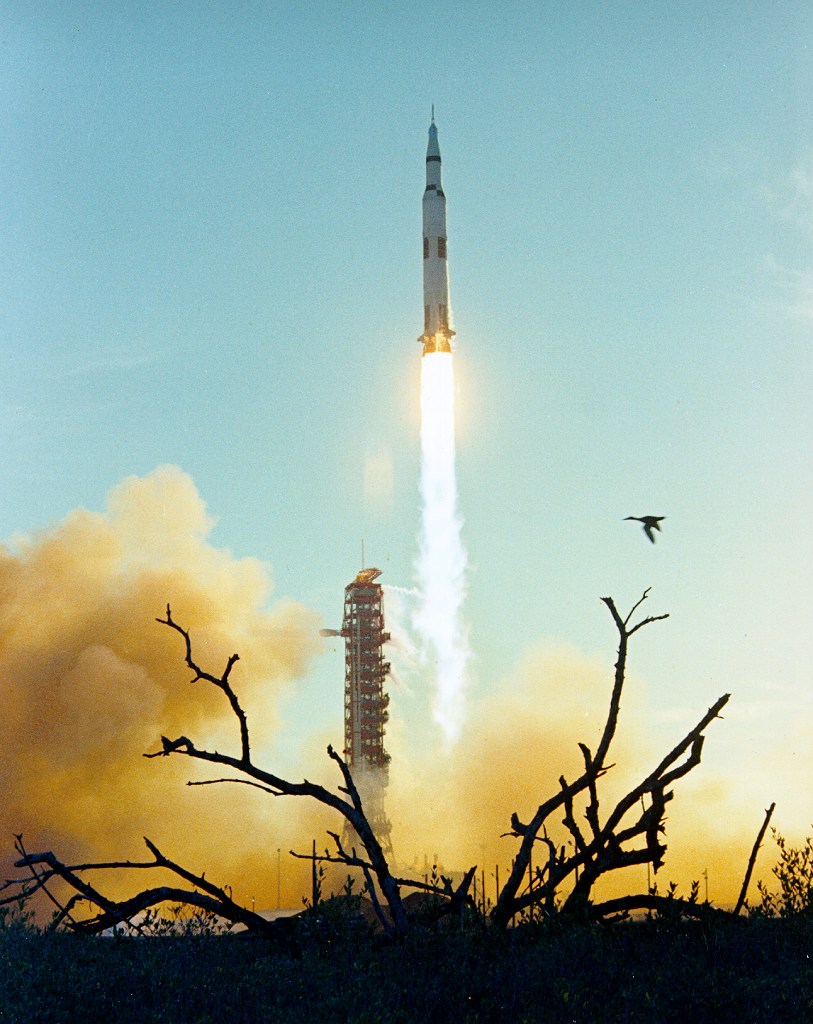 Apollo Spinoffs – “With the success of the Apollo program, NASA delivered great progress in the fields of rocketry and aeronautics, as well as the fields of civil, mechanical, and electrical engineering. Lesser known accomplishments are some of the many spinoffs that came from the Apollo program—partnerships created between NASA and industry to commercialize the technologies developed for the historic missions to the Moon.”