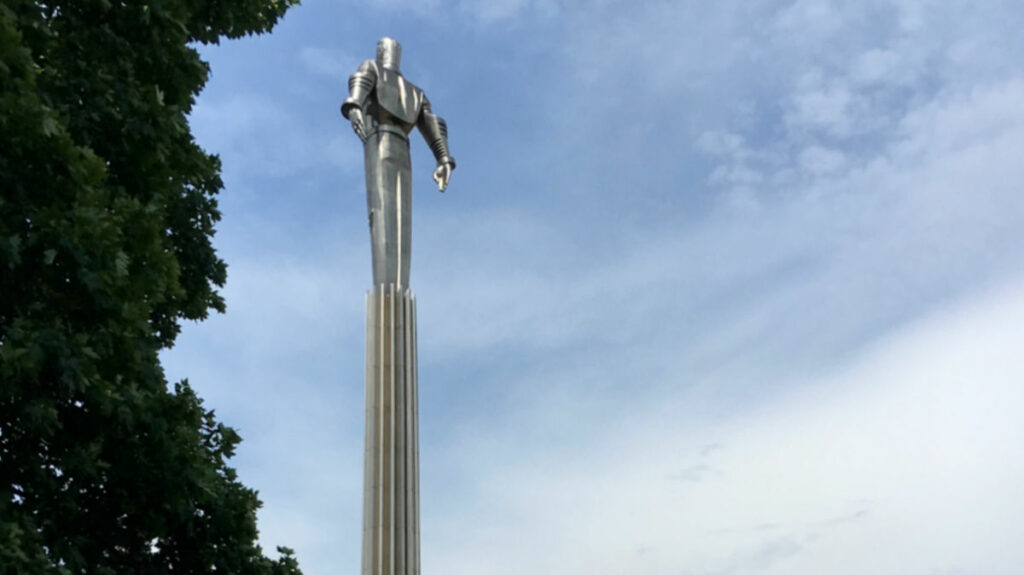 Monday was the 60th anniversary of the first time a human being orbited the Earth, Yuri Gagarin. An Italian Sunday newspaper, L’Eco di Bergamo, sent me a series of interview questions about the event, which they translated into Italian and ran last Sunday. Here’s the English version of what I sent them, which is a bit different from what they ran. (What they ran was fine, just edited for space…)

1. I would propose to begin with the famous Gagarin’s sentence – falsely attributed to him, historians say – “I see no God up here”. Is it an example of a radically wrong way of understanding the relationship between science and religion?

In a funny way, it’s actually a good place to start. What Yuri Gagarin said was true. It is important to remember that heaven is not a “place” in the sky, and that you can’t travel in a rocket to see God.
The God we believe in is not just another creature living in nature, like Zeus and the other pagan nature gods, but a supernatural God outside of space and time. And only something (or some One) outside of creation can give creation meaning. After all, as the philosophers remind us, a chair has no use unless there is something that is not a chair to use the chair.

2. Is today, in this context, the shadow of the Galileo trial still felt? Or can we reconsider that historical episode more serenely?

Yes, the shadow of Galileo is still felt, because there are still people who for their own reasons want to promote the idea of a war between science and religion. The myth of Galileo was invented in the 19th century by people who were looking for a way to hurt the Church, and the myth that we are told is not confirmed by any study of the actual history of the times. Without a doubt, the Church was wrong in the way it treated Galileo at his trial (though it is worth remembering that the Church went out of its way to praise Galileo for many years before that trial). But the reasons behind his trial had more to do with personalities and politics; it was not the result of some war between science and religion. In fact, for the next several hundred years, many of the people who published scientific books and papers were priests or ministers — who else in that time had the education, and the free time, to do science?And if you want to criticize the Church, there are certainly worse things that people in the Church have done in the name of religion than what happened to Galileo!

3. Can we be content with thinking that science and religion proceed on different planes, without interacting, as the biologist Stephen Jay Gould said?

This idea of “non-overlapping magesteria” proposed by Stephen Jay Gould misses an important truth: science and religion do overlap. They meet in the human being who is both a scientist and a believer (or non-believer). It is certainly true that science and religion treat different topics. For example, Genesis is a book about God, not about science. Science hadn’t even been invented when Genesis was written! But just as Genesis examines why God created the universe, and His delight in finding that creation was good, so the motivation and delight of every scientist to want to do science can easily be recognized as religious. We delight in our science because we find it good; just as God did. Every act of science is an act of love; God is love. And we are satisfied with nothing less than the truth, because we worship truth; God is truth.

4. It remains true that contemporary astronomy describes a model of the universe very different from that of the past: in the 16th century, the Anglican archbishop James Ussher calculated that the world had been created “at the entrance of the night preceding the 23rd day of October … the year before Christ 4004 “. Today we know that the universe is 13.8 billion years old …

Of course, as you know, the scientist who first proposed the theory we now call the Big Bang Theory was a Catholic priest (and PhD astrophysicist), Georges Lemaître. But what many people don’t appreciate is that he was very careful to insist that the moment of the Big Bang is not the same thing as the moment of creation. God, who is outside of space and time, creates space and time itself at every place, and every time. God maintains the existence of space and time; and God gives it the characteristics that we call “laws of physics” which make the Big Bang possible.Also, it is possible and indeed likely that a hundred or a thousand years from now, the Big Bang theory will be superseded by some better theory. But however creation happened, the fact that the existence itself of the universe is even possible will always be due to the will of our supernatural God.

5. With another Jesuit, Father Paul Mueller, you wrote a book titled: “Would You Baptize an Extraterrestrial?”. If in the near future we were to discover life forms on other planets – even intelligent life forms -, what would be the implications for Christian theology and faith?

Who knows? And who knows how it will change our understanding of biology? It would be very exciting to find out! That’s why it is so wonderful to look for such life. We will learn so much more about ourselves; and we may even learn to understand God as our creator in newer and deeper ways. But regardless of what we find (if anything), the truth of Psalm 8 remains: the fact that, in the midst of this enormous universe, God knows and loves each and every one of us is amazing and wonderful. Only an infinite, supernatural God could accomplish such a thing.