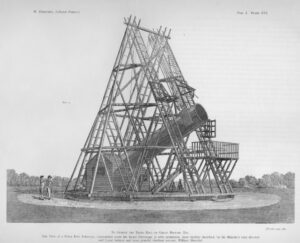 The largest Herschel Telescope, built in the late 1780’s.

We are separate now. To slow this virus that plagues us, we maintain a “social distance” from whomever we can. We communicate remotely, through electronic technology.

Astronomers like me have used such technology for decades. Two centuries ago, we worked at our telescopes with our eyes. That is how William and Caroline Herschel worked. The brother-sister team built some of the first really large telescopes, and used them to advance astronomical knowledge significantly—all through eyeball work, done right at their telescope.

But today astronomers are often well separated from telescopes. Modern telescopes are located on remote mountaintops, or even in space. What they see is detected and communicated electronically to astronomers who can be quite remote from them.

This remoteness has brought about great gains in astronomical knowledge. Consider all that has been learned by the Hubble Space Telescope, which has been keeping its distance from us, in orbit around Earth, for three decades. Consider another, smaller orbiting space telescope, the Kepler satellite, which has discovered so many “exoplanets” (planets orbiting other stars).

But that same remoteness has brought about losses, too. William Herschel was the first to ever discover a planet: Uranus. He saw it in a telescope, but could also point out its location in the sky. Modern astronomers who see space telescope images on a screen sometimes can’t even point out the planet Saturn, visible up in the night sky. Students in school see lovely images of Saturn on screens, but they generally can’t find it in the sky either—and they are often both unaware that they can actually look up and see Saturn with their own two eyes, and unaware that they can never look up and see an exoplanet.

The wonder of remote communication technology led us to gain knowledge of exoplanets, which no one may ever truly see, but lose knowledge of planets in our own solar system that we can see, marvel at, and delight in our own personal discovery of. That trade-off may be worthwhile to astronomers, who may never care to see an object in person provided it presents an interesting problem for our study. But today, as we all sit separated from one another, do we find that seeing friends, family, coworkers, and our church community online is the equal of seeing them in person? Is a concert, a play, a ballgame, the outdoors, a hug, or the Easter Vigil still the same when experienced through a screen? After this virus is past, will all our best schools continue remote-only education, never going back to in-person classes, because school online is just so much better? 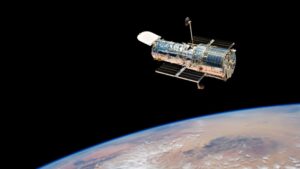 The Hubble Space Telescope, launched into orbit in the late 1980’s.

Remote communication may make space telescopes possible, but so often a screen is no equal to being there. When the virus is over, and we are no longer forced into separation, we will then have the opportunity to stop choosing separation—stop choosing to relegate so much of our lives to screens—and to value more our in-person hugs, plays, games, schools, and churches. And may we also value more things like being able to find the planets with our own two eyes, and watch them move through the sky as the weeks pass, and share our discoveries with someone, in person, who can see them with us. Separate is rarely equal, and ideas we study on a screen rarely compare to things we experience in person.

This post is a version of my April 16“Science in the Bluegrass” column for the The Record newspaper of the Archdiocese of Louisville, Kentucky.