In 1614 Johann Georg Locher, a student of the Jesuit astronomer Fr. Christoph Scheiner, published a short book called Disquisitiones mathematicae, de controversiis et novitatibus astronomicis—that is, Mathematical Disquisitions, Concerning Astronomical Controversies and Novelties. Among other things, the book discussed the phases of Venus and the satellites of Jupiter, all recently discovered by Galileo using a telescope. Toward the end of the book, Locher engaged in an interesting exercise in astronomical reasoning. He presented to his readers the figure below. 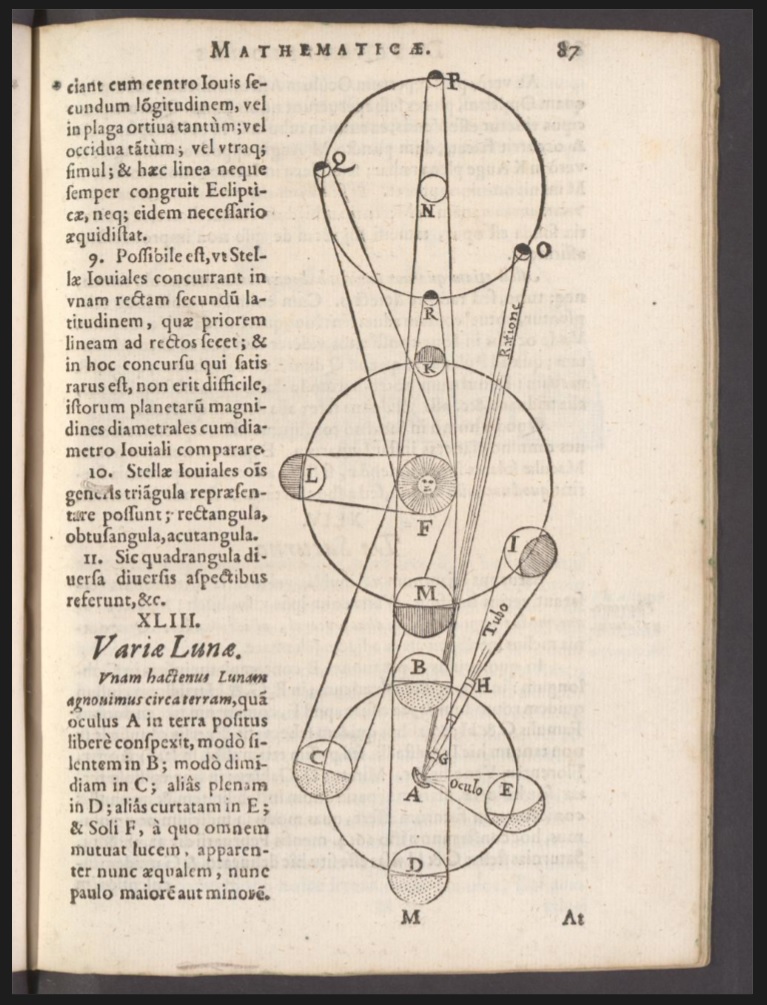 And, regarding this figure, he wrote—

Locher reasoned that the satellites of Jupiter must show phases—crescent, full, etc. Why? We see with our eyes that our Moon has phases. Our Moon’s phases occur because our Moon does not itself emit light: it is a dark body, illuminated by the sun. That half of the globe of our Moon that faces the sun is bright, the other half is dark. The relative positions of our Moon, the Earth, and the Sun determine how much of that illuminated half of our Moon we will see, and thus determine the phase of our Moon. For example, if our Moon is opposite the Sun in the sky, so that Earth lies between it and the Sun (at D in Locher’s figure), we see only the illuminated half of our Moon, and none of the unlit half, so we see a Full phase. Moreover, we see with the telescope that Venus has phases, just like our Moon. Venus then is also a dark body, illuminated by the Sun. 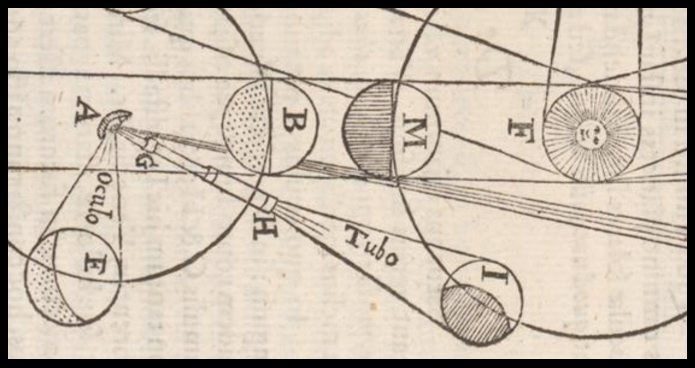 Locher observed that the Jovian satellites could not be seen when they were in Jupiter’s shadow. If they emitted their own light they would always be visible, whether they were in Jupiter’s shadow or not. Thus, he reasoned, they must be dark bodies that do not emit their own light—dark bodies like our Moon. And, they circle Jupiter like our Moon circles Earth. Thus they must have the same appearance as seen from Jupiter that our Moon has as seen from Earth. In other words, as seen from Jupiter, they must show phases. Logic and geometry (that is, mathematics) say they must. 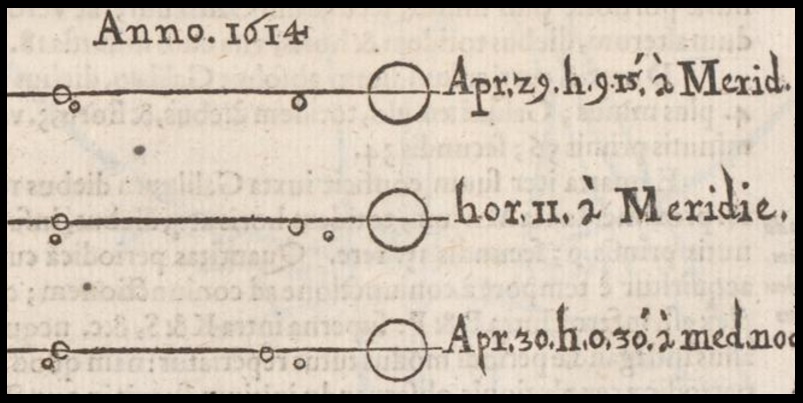 Locher’s drawings of the Jovian system as seen through a telescope on the night of April 29, 1614, at different times. He notes that the sudden appearance of a fourth satellite as shown in the second drawing is on account of that satellite emerging from Jupiter’s shadow. 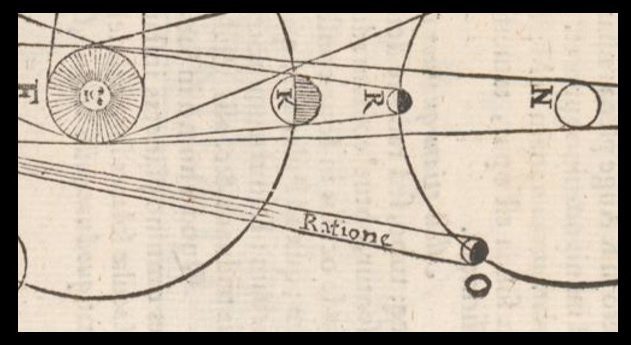 Locher shows the phases of a Jovian moon being visible “to reason”—“ratione”.

We should note that reason does not absolutely prove that Jupiter’s satellites are dark bodies illuminated by the Sun and that therefore they show phases. We could theorize that perhaps each Jovian satellite does emit its own light, like a stupendous light bulb. And perhaps each satellite’s light is controlled by an elf who chooses to switch off that satellite’s light every time the satellite passes into Jupiter’s shadow (we can speculate that this occurs because the elves like the dark and can only get complete dark when in Jupiter’s shadow and thus shaded from the Sun). Were the “elf hypothesis” correct, then the glowing satellites would absolutely not show phases as seen from Jupiter.

But, the elf hypothesis is not correct. NASA has sent robotic space probes out to Jupiter. Those probes have been in a position to see the unlit halves of the Jovian satellites, and the cameras on those probes have seen directly that Jupiter’s moons are dark bodies, illuminated by the Sun. The probes have proven that the moons show phases, like Locher said. That’s one more victory for reason, logic, and mathematics, and one more loss for invoking elves. Of course, no one thinks of “proving that Jupiter’s satellites are moons and not elf-controlled light bulbs” as being a big astronomical discovery made by NASA’s probes, because the rational argument for them being moons and not elf-bulbs was so compelling.

Invoking elves may seem silly, but the conclusion Fr. Scheiner’s student reached in 1614—that Jupiter’s moons show phases, a conclusion borne out over 350 years later by NASA probes—is much like many other conclusions about the universe that astronomers arrive at. These conclusions—such as the existence of dark energy, black holes, “planet nine”, or the Big Bang—are reached through reasoning, logic, and mathematics, sort of like we use reason to figure out the digits of pi. These conculsions are not proven absolutely. Some may never be proven absolutely through any direct observation. But, they make a lot of sense.

Jupiter’s moons (from left to right) Io, Europa, Ganymede, and Callisto, as seen by various NASA probes that were in position to see their unlit halves. These moons do indeed show phases; Locher’s reasoning was right on the money.