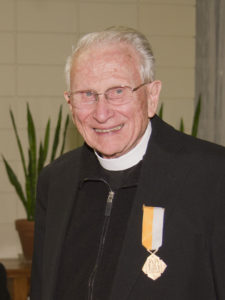 Below the cut is the official obituary for Fr. Andy Whitman SJ, who died this past week. Andy was a part of the Vatican Observatory for many years. His speciality was Lie Algebra – he wrote the book on the topic, which you can download in pdf format here. Andy was a fixture and a character… the type specimen of the “old coot” who always brought a smile wherever he went.

Andy spent a lot of time teaching in Brazil before joining us, and he still maintained his work with a remote mission outpost up the Amazon River even as he worked on his math (and did the books for the Observatory in Tucson). He was a man of many talents and enormous grace; we miss him.

Father Andrew P. Whitman, S.J. was called to eternal life on January 7, 2015, at Regional Medical Center in Lafayette, LA. He was 88 years old, a Jesuit for 63 years and a priest for 51 years.

Born in Detroit, MI on February 28, 1926, Andy attended Fortier High School in New Orleans, LA. After graduating, he earned a B.S. in Civil Engineering at Tulane University, and then served as an instructor in their College of Engineering for five years. He entered the Society on July 1, 1951 at St. Charles College in Grand Coteau, LA. Following First Vows he studied humanities in Grand Coteau and philosophy at Spring Hill College in Mobile, AL. He then began graduate studies at Catholic University in Washington, DC, earning first an M.S. (1958) and then a Ph.D. in Mathematics in 1961. He studied theology at Woodstock College (1960-64), receiving the S.T.L. in 1964. He was ordained at Spring Hill College in Mobile, AL on June 12, 1963. He made Tertianship in Decatur, IL (1964-65), and pronounced his final vows on February 2, 1970, in the chapel at Stake Jesuit College Preparatory in Houston, TX.

Andy’s career in the field of mathematics was a truly distinguished one, and a letter of this sort cannot possibly do it justice. After two years at Loyola University in New Orleans, he spent seven years (1967-1974) at the University of Houston, where he earned a tenured position of Associate Professor in the Department of Mathematics. In 1974, he joined the faculty of the Pontifícia Universidade Católíca of Rio de Janeiro, where he was a tenured Associate Professor.

One of Andy’s areas of passionate interest was the Clavius Group, which he co-founded in 1963. This is a group of lay and religious mathematicians who meet each summer at various mathematical centers and departments to form a Faith Community and to do mathematics at levels from research to study seminars on current topics of interest to the Group. His involvement with the group reflects his lifelong dedication to linking mathematics and faith. In 2003, Andy wrote the following: “…if this does not seem too exaggerated, my mathematics that I do is a prayer. One faces naked and beautiful truth when he does mathematics. One cannot win in this game by banging the table, or claiming the wisdom of old age, or pretending. Either your logic works and can be acknowledged by others, or it does not. And when it does, say after a proof that carries through several pages, you are in the presence of the Divine.”

In 2010, ill health required him to return to the South, eventually to the St. Alphonsus Rodriguez Pavilion in Grand Coteau. For as long as he could, he continued his work on a textbook in Lie Algebra. He was humbled and gratified in 2011, when he was awarded the Holy Cross Pro Ecclesia et Pontifice by Pope Benedict XVI in recognition of his service at the Vatican Observatory.

Andy is preceded in death by his parents, Andrew Whitman and Elizabeth Greichek Whitman Dourrieu, his brother Gerald and his step-brother John Newton. He is survived by his sister Elizabeth and his nephew Stephen DiLorenzo.