A while back I wrote a post (click here for it) on how anyone who looks at the sky and who can do very basic geometry can tell that the universe is vast, and the Earth is tiny—and yet we repeatedly find various writers talking as though, before Modern Science, people thought the universe was small, comfortable, reassuring, intimate, etc. etc. etc.  Recently my younger son, who enjoys doing things like reading all of Plato, turned up this bit on how the pursuit of glory is pointless, from The Consolation of Philosophy, a discussion on God and Providence and evil (Consolation was written by Boethius, from prison, in around the year 525): 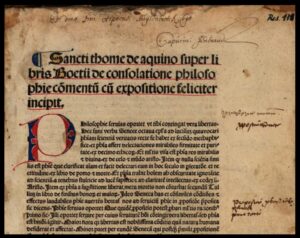 Consider with me in the following detail, how limited this glory is! How frivolous and how contemptible! You have learned from astronomy, that this globe of earth is but as a point, in respect to the vast extent of the heavens; that is, the immensity of the celestial sphere is such that ours, when compared with it, is as nothing, and vanishes. You know likewise, from the proofs that Ptolemy adduces, there is only one fourth part of this earth, which is of itself so small a portion of the universe, inhabited by creatures known to us. If from this fourth you deduct the space occupied by the seas and lakes, and the vast sandy regions which extreme heat and want of water render uninhabitable, there remains but a very small proportion of the terrestrial sphere for the habitation of men. Enclosed then and locked up as you are, in an unperceivable point of a point, do you think of nothing but of blazing far and wide your name and reputation? What can there be great or pompous in a glory circumscribed in so narrow a circuit?

That’s right, Boethius (Anicius Manlius Severinus Boëthius, also known as St. Severinus Boethius) refers to this globe of Earth as being, in comparison to the universe, like a point, as nothing—the Earth just vanishes by comparison.  You can’t get any smaller than that.  It is easy to find various writers describing Boethius’s works as being widely read in medieval times, or being second in importance only to Aristotle and Augustine in medieval thought, or being used as medieval textbooks—so the idea of a tiny Earth in a vast universe was something any educated person would have been familiar with, even if that person slept through medieval astronomy class.

More from Sancti Thome de Aquino super libris Boetii. The image on the right contains the text referring to astronomy, the Earth being a point, and Ptolemy.

Yet so often the idea of a tiny Earth is presented as though it were an idea brought to us by modern science.  Carl Sagan was one of the people who so often put forth that sort of idea.  Parts of his well-known “Pale Blue Dot” discourse almost sound as though they came from Boethius:

The Earth is a very small stage in a vast cosmic arena. Think of the rivers of blood spilled by all those generals and emperors so that, in glory and triumph, they could become the momentary masters of a fraction of a dot….  Our posturings, our imagined self-importance, the delusion that we have some privileged position in the Universe, are challenged by this point of pale light. Our planet is a lonely speck in the great enveloping cosmic dark.

But of course, a little history of astronomy, or a little reading of Boethius (or knowing someone who does read Boethius), shows that we have long understood that the Earth is a vanishingly small stage in an unimaginably vast cosmic arena—a pale blue point.  Modern science didn’t tell us this; basic observations and basic geometrical reasoning did.