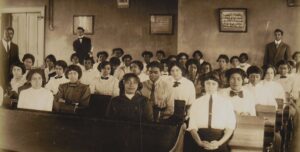 The post from two weeks back, about Democracy and Truth, included a bit of a poem from the dedication of Kentucky State University. When KSU opened in 1887 in Frankfort (the capital of Kentucky) it was called the Kentucky State Normal School for Colored Persons. The KSU dedication poem, and its author, are the subject of this post.

The Normal School, Kentucky’s second public institution of higher education and its second Land Grant college, was not intended to be a scientific institution when it opened, and it was not, or at least not directly. It was a school to train teachers, and it only had three teachers and fifty-five students when it opened. Nonetheless, there is within its Dedicatory Poem a strong theme of science (expressed in the poem as the study of God’s laws written into creation) being an important part of the search for Truth:

Majestic hills that guard our honor’d State,
Break now your silence, help us to rejoice;
Awake ye silent sentinels, find voice;
Ye need no longer, like the hoary seers,
Keep watchful eye upon the coming years,
For we are armed for what the years may bring,
Are strong for effort, therefore with us sing
Ye smiling plains, assist us in our praise;
Ye winged songsters, lend your charming lays;
Aye! let us all unite, with might and main,
Make known the burden of our glad refrain.
Today we gather here to dedicate,
In name of Progress, and of our growing State,
This Normal School, wherein we consecrate
A safe guard that will bless with fruits of peace
Our homes and State as swift the years increase.
Here shall the mind’s true growth be clearly shown;
Truth be portrayed and Error overthrown;
The principles of thought shall be explored;
The teacher’s art to its high realm restored.
They who, within these walls, shall knowledge gain,
How they should childhood’s nascent powers train,
Shall to our Commonwealth protection be,
Greater for peace and for prosperity,
More true to her high hopes and aims, by far
Than all the arts and implements of war.
O then Eternal One whose boundless pow’r
Holds us in life, this priceless dower
To us by Thee in gracious love is sent;
And we to Thee our thankful hearts present.
The Nature’s glory and the State’s renown,
That constant joy and happiness that crown
The peaceful homes of our great prosperous land,
Shall we endure, if Thy indulgent hand,
Scattering peace and comfort everywhere,
Shielding from dangers that the years may bear,
Shall give us in the paths that lead aright
And guard us with Thy all-subduing might.
And we would learn of Thee; Thou art the cause
Of all our joys, and these Thy wondrous laws,
Deep-written in Thy works, that here abound,
Proclaim Thy wisdom matchless and profound.
Where’er we look, where’er we turn we find
New evidence of Thy creative mind;
Throughout creation, wheresoe’er we scan,
Proofs of Thy goodness both to beast and man
All testify of Thee; our spirits yearn
To know Thee more; and in Thy works discern
Thy truths—from Thee this lesson gain,
How we may, beings noblest, heights attain.
O may Thy blessings on the school descend;
Protect it ever—against ev’ry ill defend;
And may the lessons herein gain’d and taught
With rich result, with highest good be fraught.

The author of this poem was William H. Perry of Louisville, Kentucky. He was, at the time, a school principal in Louisville. There is a chapter on him in the 1897 book Biographical Sketches of Prominent Negro Men and Women of Kentucky. It mentions his part in the dedication of KSU. It also notes him as being “an upright Christian”.

Today Perry’s poem may seem much too religious for a state college, but Christianity had a strong presence in the early KSU. KSU opened with limited resources—the original building contained just a few rooms. But there was a chapel. The original building still stands, and is now called Jackson Hall. Within it now is an exhibit of wall panels on early life at KSU.

The panels of this exhibit include the following:

Each day began in the Chapel with devotionals and singing….
Students were taught a classical liberal education, pedagogical skills,
industrial trades, Christian values and the dignity of labor.

Jackson Hall at Kentucky State, in the past, and today. 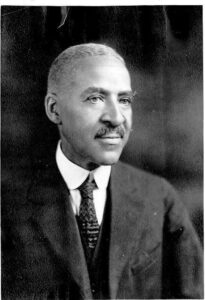 Thus Perry’s poem fit right in with the spirit of the early KSU. The poem suggests that Perry had an inclination toward science, and that Perry thought of science as the study of the works of God—much like Johannes Kepler, another person given to poetic writings about science and God.

According to Biographical Sketches, Perry was born in 1860 in Terre Haute, Indiana. The chances that an African American born in 1860 and living in Kentucky in the 1880’s would be working as an astronomer in an observatory, or as a researcher in some academic or industrial lab, were doubtlessly small. Nevertheless, Perry’s scientific interest did carry him pretty far: Dr. William H. Perry was, in 1908, the first African American to secure his license by passing the Kentucky State Board of Medical Examiners, and later he co-founded the Louisville Red Cross Hospital. The man who was invoking God and science in his poetry when he was twenty-something, was using science in his work when he was forty-something. Had Johannes Kepler and William H. Perry met, they no doubt would have found they had a few things in common.

From the V.O. Faith and Science Pages: Spiritual Foundations for Jesuit Commitment to Science

Rare Life: Does It Matter… Does It Exist?

The Rise of Sasquatch (re-run)