Artist’s conception of mission life, from a National Parks brochure on the San Antonio Missions.

One of the missions, Mission Nuestra Señora de la Purisima Concepción de Acuña, appeared in this blog last year (click here for that post) because the sun illuminates that church in an interesting way every Feast of the Assumption.  However, as I noted in that post, while arranging that sort of illumination would have been an interesting scientific exercise, it would not have involved complex astronomical calculations.  A more complex bit of science to be found at the missions is a very practical science that is still put to work in the San Antonio area today.  That is the science of water management.

To irrigate the mission farmlands, the Franciscans and Coahuiltecans built dams, reservoirs and miles of open channels or acequias to carry the water from the reservoirs to the farmlands under the action of gravity alone.  Getting water from one place to another in the area’s hilly terrain without the use of pumps required skill at mapping out the contours of the land and being able to determine a proper grade to follow around the hills.  The grade would have to be steep enough for the water to flow sufficiently, but not so steep as to make the water rush too rapidly and erode the channels.  This grade would have to be maintained as the channel was routed around hills.

To get water from a reservoir behind the Espada Dam on the San Antonio River to the mission fields, the builders had to send the irrigation water above a natural stream.  For that they built a stone aqueduct in the early 1740s—the only such structure in the U.S., according to a plaque at the aqueduct.*  The acequia system served to provide water for farmers all the way into the 1950s.  Some of that 250-year-old system still survives today, and still irrigates fields in the missions.

While the mission acequia system itself may be less important than it once was, San Antonio still relies on a complex water management system—an acequia system of sorts.  Visitors to downtown San Antonio can stay at hotels, eat, walk, and ride boats along the picturesque San Antonio River.  But that river today is really just the product of the science of water management—its water level and flow are controlled by dams and a big underground bypass tunnel.  When the river floods, the water is sent through the tunnel to bypass the vulnerable downtown.  When there is low water in the river, the water is recycled through the tunnel—pumped back up to maintain the flow and level through the downtown.  It is pretty complicated stuff.  No doubt the Franciscans and Coahuiltecans who built the original acequias and aqueduct would be impressed.  But they would understand how it all works, and the calculations that needed to be done to build it.  The physics of water flow is the same now as it was then.

Check out all the water works, past and present, in the photos below.

Various views of the aqueduct (that’s me in the center one), still carrying water over water. 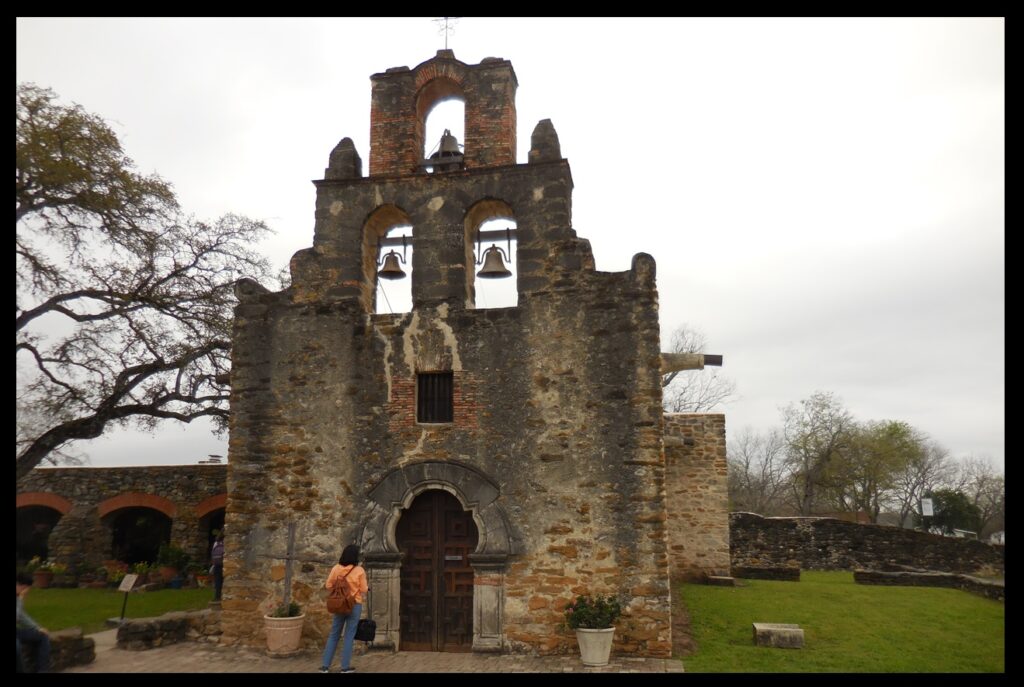 Carrying water in a more modern manner:  Left—downtown San Antonio around the San Antonio River.  Right—part of the works that makes the river what it is.

The river looks very different downtown (left), where it is dammed and controlled, than it does south of town, where it can be seen as the small stream it really is (center).  At right is the river in the 1950’s, prior to being reshaped.

Left—a map showing how the river once ran, compared to its man-made channel through downtown San Antonio now.  Center—a diagram of the flood control tunnel.  Right—the outlet of the tunnel in normal flow (top) and during a flood in May 2013 (bottom).

*All information on the acequias, aqueduct, and San Antonio River water management system, as well as diagrams, maps, and certain photos, comes from informative plaques along the river and in the missions.