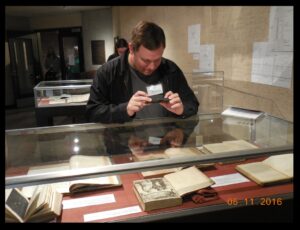 Prof. Chad Howard of Jefferson Community & Technical College, checking out an original edition of Galileo’s Dialogue, as well as some other rare math and science books in the University of Louisville’s Bullitt Collection.

Many different astronomers and their work have been featured on this blog.  We’ve seen some of the research being produced by Vatican Observatory astronomers.  Brenda Frye of Steward Observatory at the University of Arizona was a regular contributor to the blog for quite a while.  Fernando Comerón has contributed a guest post about his work at the European Southern Observatory, where he gets to observe with some of the world’s largest telescopes.  Larry Lebofsky has recently written about observing with the Vatican Advanced Technology Telescope (VATT) on Mt. Graham in Arizona.  But today I would like to give readers of The Catholic Astronomer a different perspective on doing astronomical research.

Meet Chad Howard, a colleague of mine at Jefferson Community & Technical College (JCTC) here in Louisville, Kentucky.  He is doing work that I think will be of interest to readers of The Catholic Astronomer, and he is doing it for reasons that readers will also find cool.  Chad is studying a star cluster: NGC 2244.  If you are familiar with the Rosette Nebula, located to the east of Orion, you know the star cluster he is studying.  This is because NGC 2244 comprises the stars seen at the center of that nebula. 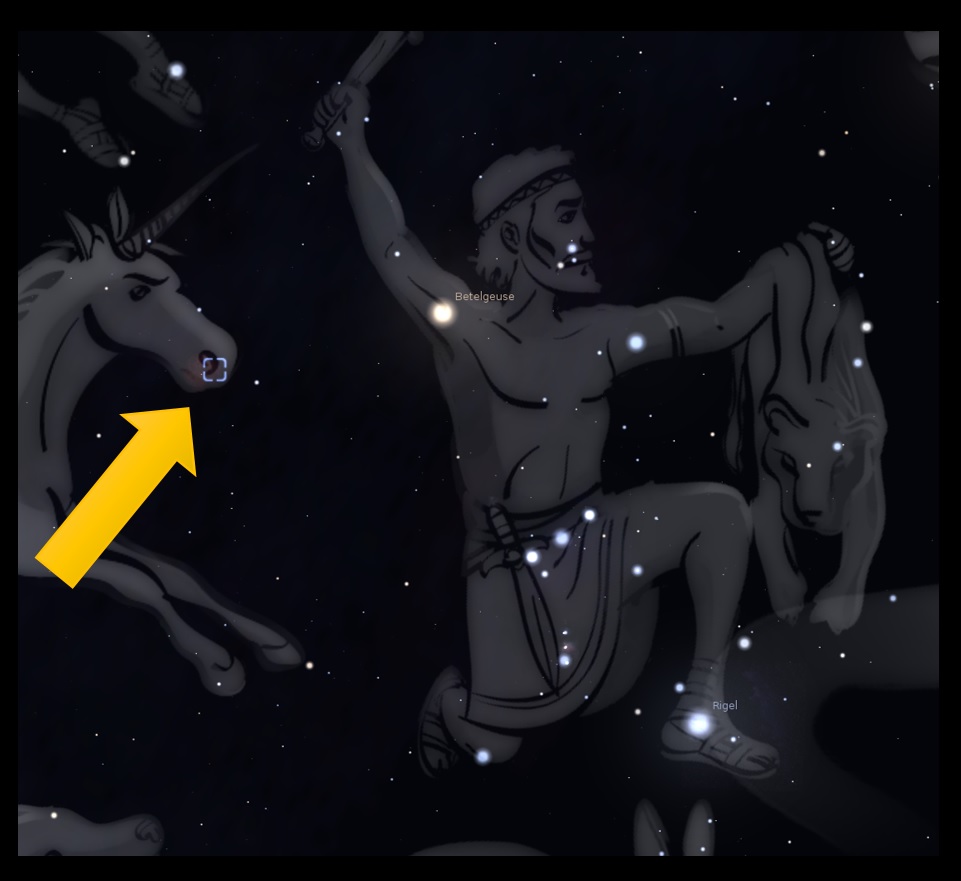 The location of the Rosette Nebula—just to the east of Orion, in the head of the Unicorn.

Chad’s primary job is the same as mine—he is a physics and astronomy professor at JCTC.  But he is also pursuing a doctorate from the University of Louisville, and studying NGC 2244 is part of his work toward that degree.  I asked Chad to tell me a bit about this work.  Here is what he had to say:

My research involves a new study of the central cluster in the Rosette Nebula, NGC 2244.  I am attempting to determine an updated count of the number of stars present in the cluster, along with their distances and motions.  The goal is to eventually assemble these into a 3-dimensional computer model that could be examined or rotated as needed by other astronomers when studying the cluster.  As a secondary project, I’m attempting to identify any variable stars in the cluster by making long time-scale observations. 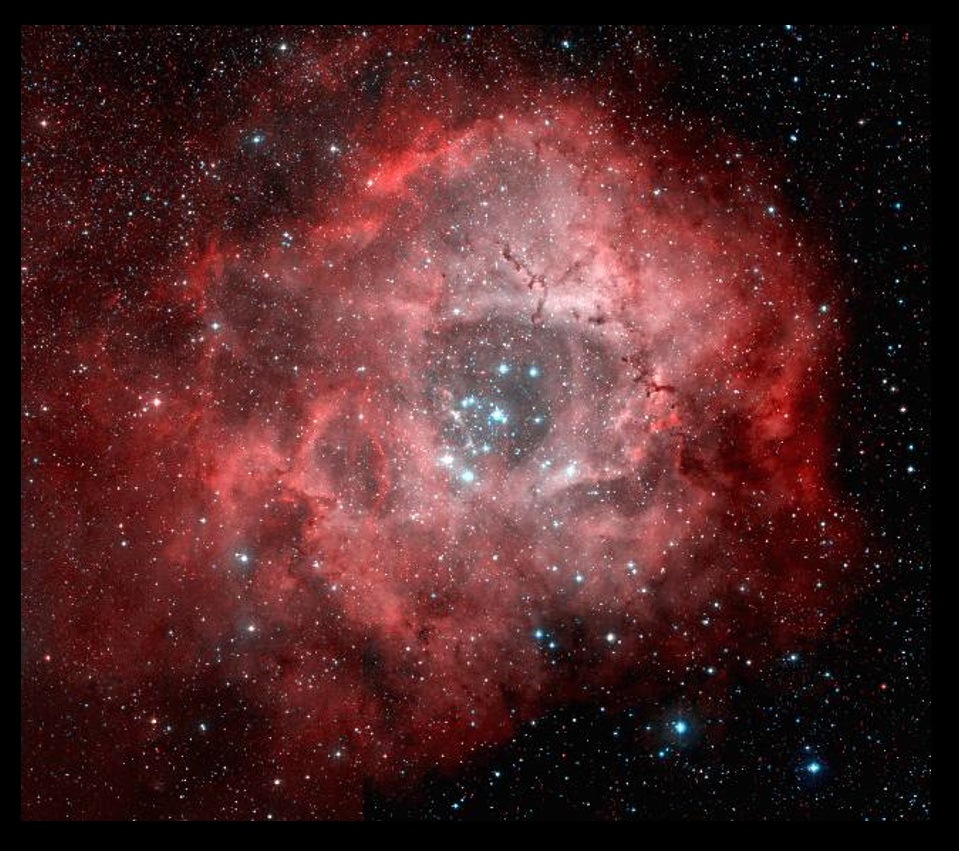 The new research is primarily motivated by recent data taken by two orbiting telescopes: GAIA, run by the European Space Agency, and the NASA-run TESS.  Both of these are precision instruments with the capability of taking measurements more finely detailed than ever before.  This data is being used for both the population count and the distance determinations.

I’m also making use of ground-based observations taken by telescopes affiliated with the University of Louisville.  First, the Moore Observatory in Oldham County; then also the Mt. Lemmon observatory in Arizona and Mt. Kent in Queensland, Australia.  A joint observation by all three will potentially allow the identifications of variable stars.

The Rosette Nebula in general has been a fascinating object of study, and most of the data from orbiting satellites is publically available online for anyone with the desire and motivation to sift through it.  Besides its aesthetically lovely appearance, it’s also close enough to be readily studied by multiple instruments both on the ground and in person.  That allows for a lot of cross-checking and correlation, and all using data either from a regional easily-accessed telescope, or publically available data from orbital instruments.

The eventual hope is to create a unified, updated source of data and research for NGC 2244 that can be of use to all other astronomers.

Chad does not have to do this work.  He only recently was promoted to the rank of Full Professor at JCTC.  He has “made the grade”, in other words.  Moreover, we community college professors are not required to do research.  “Publish or perish” is not part of our world.  That doctorate Chad is working on will not improve his situation at JCTC—he has already reached the top of the professoriate.  The typical community college wants its professors to have a master’s degree in their field, and thus that is what the majority of us, including both me and Chad, have.  Chad’s doctoral work is just gilding on the lily, so to speak.  The fact is, our primary responsibility as community college professors is teaching.  Indeed, the “Professional Development” requirements for someone who has just made Full Professor are none too tough—he could just attend the college’s “Professional Development Day”, and do a few other things, and that would just about cover his “Professional Development” obligations.  In other words, Chad is doing this astronomical research when he could be sitting around on his laurels, eating bon-bons, metaphorically speaking.

These are photos of the University of Louisville’s Moore Observatory, located in Oldham County, Kentucky, just outside Louisville. These photos are from the observatory’s web page. The telescope seen here is a Planewave Instruments 20-inch (0.5-meter) f/6.8 corrected Dall-Kirkham telescope. It has an identical companion at Mt. Kent Observatory in Queensland, Australia. There are other instruments at Moore Observatory as well.

I asked Chad to talk about why he does this work, rather than enjoying those metaphorical laurels and bon-bons.  Chad’s answer:

It may seem trivial to many people—but when I’m analyzing something like a spreadsheet of new distance measurements, and I compare them to the most recent papers on the Rosette Nebula to discover that the new distance estimate is significantly different than what has been previously published, there’s a real thrill to realize that I’m the first human being that has learned that small new piece of information.  That it’s not just something I’m learning out of a textbook, but real data that humanity is sifting for the first time, and I get to be a part of that human project.

This is what keeps bringing me back to the research after years of teaching, and after having reached the final rank in my academic institution.  Those achievements have been satisfying, no doubt, but the science is the reason I got into teaching in the first place.  It began with my attending Space Camp as a teenager.  After that, I knew that I wanted to do “space stuff.”  Then in college, I asked my advisors what major would put me closest to studying space and being on the forefront of new discoveries, before it filtered down to popular level programs on television.  The answer I was provided was “physics,” and it’s been a fun ride ever since.

Make no mistake, I love teaching.  My mother was a teacher up until retirement, and I’ve always loved the collegiate world.  So creating a career in the institutions of higher learning always seemed more likely for me than a strictly industry-oriented career.  When I’m teaching astronomy, though, few things seem to catch the attention of students more than when I’m able to tie in the topics they’re studying to things that are being studied right now by their own teacher!  It’s one of the few times undergraduates really get to peek at what it looks like to be an actual scientist, and not just curriculum in their textbooks.

So that thrill of discovery, that engagement with the students, and the sheer love of learning how the universe operates all rolls together into a big driving force that refuses to let me settle into cruise control as the years pass.  Missing out on the steady rhythm of discovery in the scholarly community would make my world a much more calcified and uninteresting place, and not one in which I’d like to live.

I can “second” Chad’s comments about students seeming to particularly engage with material when they know that their professor is actually studying the subject at hand and contributing to the body of knowledge about that subject.  Community college students often express worries about whether they are getting a “real college” class, or whether they are just getting an education from a textbook.  This may be part of why they seem to really appreciate knowing that their professor is part of the research community.  That worry is generally misplaced, as community college professors as a whole are among the “All Stars” of the academic world.  Yes, that is a biased bit of boasting, and yes, there are those community college professors who are not so great.  But the fact is, in a university, where professors focus on research as much or even more than on teaching, not everyone is necessarily cranking out great research; some may produce little at all.  By contrast, in a community college, where all the professors are sinking the vast majority of their effort into teaching, everyone is producing something—everyone is teaching five classes a semester.  So in that way the particular enthusiasm of Chad’s students to have a professor who is doing astronomical research may be a little misplaced, but no matter—the good thing is that the students are engaged. 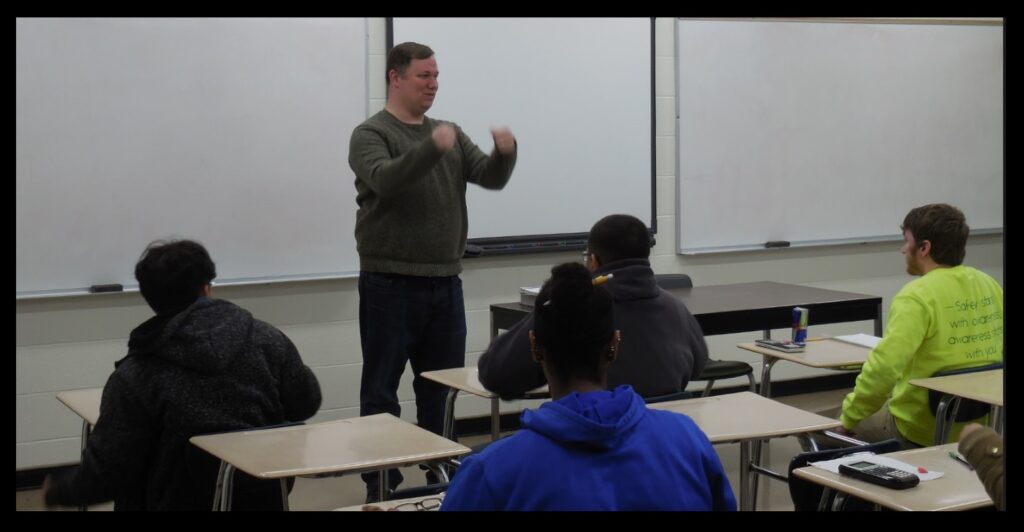 Chad in the classroom, getting a point across to his students.

So, readers, this has been a different perspective on astronomical research.  The Moore Observatory’s telescopes are much smaller than the VATT, and not located on a high, dry, remote, and dark Arizona mountain.  And they are absolutely puny compared to what is at the European Southern Observatory.  Chad Howard’s primary responsibilities as a professor are to his students, not to research.  Nevertheless, some cool astronomical research is going on, right here in River City—Louisville, Kentucky—and it is happening just because he thinks it is cool.  And it is even trickling down to students.  In my opinion, science just doesn’t get much better than that.