I’ll believe it when I see it!  This pithy truism of our culture is often used to force hard data in the face of doubt.  Though this mentality has its limits, it also has its strengths, demanding that clear, empirical evidence be provided as proof that something is true.  For example, for years we have heard about the potential of water on Mars and, year after year, we hear of discoveries that point to the existence of water on the red planet.  On September 28th of this year, another announcement of the discover of water on Mars was made, but this time the news seemed to catch much more attention than previous discoveries.  The reason this finding made more news than those of the past is rather simple: NASA now has images in which they can actually see soil moisture on Mars’ surface in addition to chemical analysis that confirms the high probability of water being present. (For a good interview on this subject, click here to hear Br. Guy explain this finding of water on Mars with Vatican Radio.)

A Video Animation Simulating the Water Marks Found on Mars 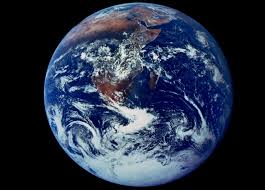 The Iconic Image of the Earth Known as “The Blue Marble.”

This demand for empirical evidence not only gives us insight into distant planets, but also of our home, the Earth.  It’s hard to believe that the first glimpse of our common home from outer space happened only 69 years ago.  In this short history of imaging the Earth from space, the most iconic image is undoubtedly the one called “The Blue Marble.”  When speaking to people who saw this image when it was first revealed to the public, they recall not only the beauty of our planet, but also its fragility, awakening what we now know as the modern environmental movement.  The realization of our smallness gave a whole generation a profound moment of pause, realizing that our Earth needs to be cared for and treasured.  I find it ironic that this image of our home that evoked a strong call to peace and stewardship can trace its lineage back to World War II and confiscated German V2 rockets, fitted with a camera that gave us the first view of our planet from space.  It truly was a profound moment of taking the weapons of war and turning them into the tools of peace. 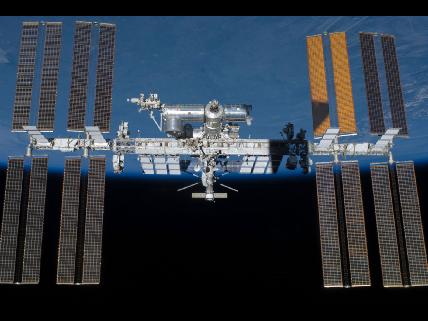 NASA Image of the ISS

From the refitting of weapons of war to the collaboration of nations that made the International Space Station possible, having a perspective of our common home from space has forever changed how we view the Earth.  We have learning much about our common home, including how ecological decisions are impacting our planet.  Similar to water on Mars, some question the existence of global warming, thinking that the changes seen in our environment are nothing more than normal, cyclical patterns of nature.  When talk emerges of global warming being unnatural, coming primarily from human sources, some demand empirical evidence to support these claims.  There are many ways to measure global warming, one of which is by observing our planet from space.  To echo the thought that began this post: If seeing is believing, then astronomy has given us much to consider when it comes to global warming.

In the spirit of seeing is believing, some have recently argued that since Antarctica is making more ice than it is losing, we should question whether or not global warming is occurring.   There is a real power to this argument since it comes from tangible measurements, at the very least making us ask if there are deficiencies in our understanding of global warming?  However, many of the skeptics often fail to mention that these ice gains are happening in the eastern part of Antarctica, but the western peninsula is losing ice at an increasing rate.  If these rates continue, the losses from the west could overcome the gains in the east.  Further, these ice gains do not change the fact that NASA and NOAA determined that 2014 was the warmest year on record when compared with the history of global temperature changes.  These findings illumine an important point about climate change: It takes time and data from many sources to understand global climate change, requiring a multi-generational perspective to grasp the breadth of the problem.

In my last post on COP21, I made reference to how many in my home country of the United States question the reality of global warming.  Some have taken on the mantra that global warming is a “political issue” and the Holy Father, Pope Francis, should stay out the of “politics of climate change.”  In defense of those critical of our Holy Father, there has been a strong connection with green industries and American politics, leading some to wonder how much of climate change politics is about our environment and how much is about election cycles?  The Catholic vision of care for creation is an approach to ecology that is not primarily political, but first an issue of morality and ethics under the rubric of human dignity.  This philosophical and theological grounding of ecology emphasizes that we are not only to be good stewards of creation, but also affirms that if we don’t care for creation we will find it more and more difficult to uphold human dignity at every stage of life.  This approach to ecology begs many moral and ethical questions.

In short, we need to stop blinding ourselves to the problem of global warming because of the bitter politics that so divide our country.  Instead, we need to first take a “seeing is believing” attitude, looking at the best science we have about global warming and then explore the moral and ethical dimensions of how our decisions will impact human dignity.  After exploring this data, is there a political aspect to addressing these issues?  Absolutely!  The purpose of politics is to provide organized structures to ensure the stability and welfare of a city, state, and nation.  Unfortunately, the polemical distrust that has emerged in our political system often ignores the reality of our environmental crisis in favor of ideological wars to preserve power structures.  Therefore, when Pope Francis calls for an “ecological conversion,” it not only calls for a change in how we see our world, but also for a change of heart in how we see one another, putting aside rhetoric and, in turn, addressing the clear facts in front of us.

Take some time this week and reflect on our call to care for creation.  Through prayer, may we have the courage to make changes in our lives to be more ecologically conscious.  And when we make those changes, let us remember that the primary goal of the care of creation is to build up human dignity for current and future generations, distancing ourselves from ideological polemics that simply perpetuate the crisis we face.