Planet Earth is a world of the faith-full.  And, it seems Earth is likely to become yet more faith-full during the next few decades.  The scientific community will have to embrace that faith-full world if it wants a scientifically literate world. 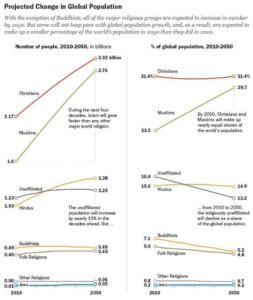 A few years ago the Pew Research Center published an article entitled “The Future of World Religions: Population Growth Projections, 2010-2050” that projected the growth of various religious groups.  Their projections, among religions, were for Christians and Hindus to maintain their share of the world’s population, for Muslims to grow substantially, and for Buddhists and Folk Religions to shrink.  However, Pew projected the overall share of the world’s population that identifies with a religion to grow—from 83.6% of the world’s population in 2010, to 86.8% in 2050—as the religiously unaffiliated, which includes atheists and agnostics, drops from 16.4% of the population today to 13.2% in 2050.  Pew notes that while there is a belief among some that increasing economic development will result in increasing religious disaffiliation, that is the experience only within certain countries.  Pew writes—

So if the scientific community wants a scientifically literate world, we will have to reach a faith-full world.  Unfortunately, the scientific community can seem a little lost on this point.  Consider, for example, the title of the 2016 book by Jerry Coyne, an evolutionary biologist from the University of Chicago:  Faith Versus Fact: Why Science and Religion Are Incompatible.  I thought of this again while paging though the Spring 2018 issue of the SPS Observer, the magazine of the Society of Physics Students, published by the American Institute of Physics.  Within that issue was a short opinion piece by Don Lincoln, Senior Scientist at Fermilab, entitled, “To the Ramparts: Defending Science!”, itself part of a larger section entitled “Exploring Science Communication and Policy”.  Lincoln writes—

There is a cultural war going on for the soul of America, and you are a soldier.  That might seem to be an overly martial metaphor, but bear with me.  On the one side, there are the voices of reason and science, guided by logic and with a deep respect for the interplay between mathematics, modeling, and empiricism.  On the other side are those who reject the tools that have advanced our understanding of the universe.  They are the antivaxxers and flat-earthers, the homeopaths and climate-change deniers….  There’s astrology, creation science, and zero-point energy….  The forces of pseudoscience have always been among us.  But the internet has given them a larger voice than before and allowed them to grow their communities.  With increased voice comes increased influence. 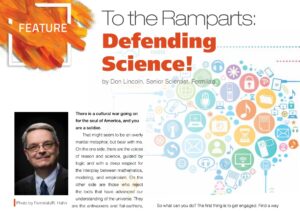 Lincoln is telling today’s young scientists to think of too many people as being enemies.  He puts too many people on the other side of the ramparts.  Flat-earth-ism, astrology, and creationism (to stick with astronomy-related things Lincoln mentions) are not all of a piece.*

Flat-earth stuff is simply naked ignorance, and it always has been.  No one ever in human history, who bothered to take the least trouble to look, ever thought that the Earth is flat.  Aristotle knew the Earth is round, and he was not the first to figure that out.  The roundness of Earth is obvious to anyone who pays any attention.

By contrast, plenty of distinguished thinkers over a vast span of centuries believed in astrology.  Johannes Kepler, one of my favorite people to talk about on this blog, did, and he is one of history’s A-list scientists.  Astrology has not withstood the test of time.  It fails as a science.  But, unlike flat-earth-ism, it was once sort of defended by reasonable people.

Creationism is different still.  One can reasonably argue that the universe was created by God relatively recently, and that God simply chose to create a mature universe that appears to science to have vast age, just as God chose to create Adam as a mature man who, were some scientist around to examine him, would have appeared much older than he was—and science cannot challenge this any more that it can challenge the claim that God created the universe this morning with the appearance of vast age.  Kepler believed that the universe was 6,000 years old.  Kepler was a voice of reason and science, guided by logic and with a deep respect for the interplay between mathematics, modeling, and empiricism, but his faith meant a lot to him.  Even were he made aware of modern scientific discoveries, he might have still affirmed as a matter of faith the idea of a recently created universe.

Faith means a lot to many, many people, and among people of faith there is a deep intellectual tradition of reason and logic and science.  And, according to Pew’s projections, faith-full people are only going to become a bigger part of the population of this planet.  Science absolutely, positively does not want to be putting them, or any noticeable fraction of them, on the other side of the ramparts with the Flat-Earth know-nothings.  Science cannot afford to be so exclusionary and opposed to diversity of thought as to accept declarations that science and religion are incompatible; it cannot afford to be in battle with any noticeable fraction of a group that makes up 80+% of the world’s population and growing.  On the contrary, the scientific community must work to ensure that there is no opposition between faith and science, that no one gets the message that science is more the business of people from Norway than people from Nigeria (Christianity, for example, often being cited as declining in Scandinavia and growing in Africa).  Call it Celebrating Diversity.  Call it wanting the largest possible pool of scientific talent.  Call it recognizing demographic reality.  Regardless of what we call it, we need to make sure that the only people on the other side of the ramparts are those who really do have no commerce with reason and logic.

And guess what?  The Vatican Observatory is doing exactly the sort of thing that the scientific community ought to be doing!  So, support science!  Support inclusivity!  Support more people thinking that they can be a part of the scientific enterprise!  Support the V.O., and particularly the Vatican Advanced Technology Telescope!—click here.  Someone has to be doing science with an eye to an increasingly faith-full world.

*Lincoln does use the term “creation science”, so he may be referring to efforts to argue that the Earth does not even appear to be old as measured by science, efforts which tend more toward the flat-earth mentality, but without his having explicitly drawn this distinction I suspect most readers will think of creationism in general when they read his piece.