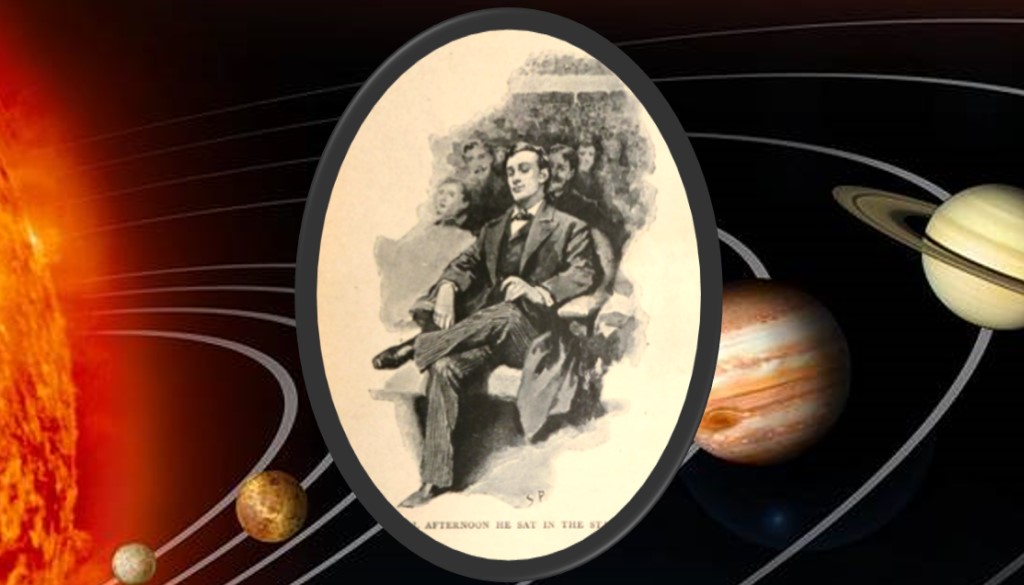 Or that’s the sort of person I would have imagined, until a colleague of mine* introduced me to “A Study in Scarlet” by Arthur Conan Doyle.  “A Study in Scarlet” is the story of how Dr. John H. Watson first met, came to share an apartment at 221-B Baker Street with, and got to know Sherlock Holmes.  Watson is astonished to learn that Holmes is unaware that the Earth revolves around the sun:

His ignorance was as remarkable as his knowledge. Of contemporary literature, philosophy and politics he appeared to know next to nothing. Upon my quoting Thomas Carlyle, he inquired in the naïvest way who he might be and what he had done. My surprise reached a climax, however, when I found incidentally that he was ignorant of the Copernican Theory and of the composition of the Solar System. That any civilized human being in this nineteenth century should not be aware that the earth travelled round the sun appeared to me to be such an extraordinary fact that I could hardly realize it.

“You appear to be astonished,” he said, smiling at my expression of surprise. “Now that I do know it I shall do my best to forget it.”

“You see,” he explained, “I consider that a man’s brain originally is like a little empty attic, and you have to stock it with such furniture as you choose. A fool takes in all the lumber of every sort that he comes across, so that the knowledge which might be useful to him gets crowded out, or at best is jumbled up with a lot of other things, so that he has a difficulty in laying his hands upon it. Now the skilful workman is very careful indeed as to what he takes into his brain-attic. He will have nothing but the tools which may help him in doing his work, but of these he has a large assortment, and all in the most perfect order. It is a mistake to think that that little room has elastic walls and can distend to any extent. Depend upon it, there comes a time when for every addition of knowledge you forget something that you knew before. It is of the highest importance, therefore, not to have useless facts elbowing out the useful ones.”

“But the Solar System!” I protested.

“What the deuce is it to me?” he interrupted impatiently: “you say that we go round the sun. If we went round the moon it would not make a pennyworth of difference to me or to my work.”

I was on the point of asking him what that work might be, but something in his manner showed me that the question would be an unwelcome one. I pondered over our short conversation, however, and endeavoured to draw my deductions from it. He said that he would acquire no knowledge which did not bear upon his object. Therefore all the knowledge which he possessed was such as would be useful to him.

Thus not only was Holmes unaware that the Earth revolves around the sun, but having been informed, he considers that information so utterly devoid of value that he fully intends to forget it.  This is Sherlock Holmes, for crying out loud, the brilliant character who believes in observation and reason—in science!—as a means of acquiring knowledge.  His maxim that “when you have eliminated the impossible, whatever remains, however improbable, must be the truth,” pops up more than occasionally in the science world, being used by physicist and science popularizer Michio Kaku, by The Economist in discussing science, by NASA, by plenty of people leaving comments on the internet, and, most importantly of all, by both Data and Spock of Star Trek.

But indeed Sherlock Holmes was unaware that the Earth revolves around the sun, and then intended to forget it.  He was a stubborn geocentrist.  Those of us in the science world should not forget him and his attitude.  For many people, including many intelligent people, astronomy and its like comprise useless information that has no bearing on their lives and their work.  In my work with the public at our observatory and with the students of the community college world I encounter many such pragmatically-minded, bright people—people who do not consider it poor form to express no interest in knowledge they find useless and irrelevant.  Like Holmes, such people are disinclined to give heed to such knowledge, especially when it crowds into knowledge that they find highly relevant, useful, and important.  Indeed, even if they need to learn certain concepts for practical reasons (such as to pass a science class they need for a degree), they are, like Holmes, likely to do their best to forget those concepts afterwards.  Sherlock Holmes reminds us that disinterest in and even rejection of astronomy and other aspects of science need not be the sign of an unreasoning, unthinking numb-skull.  Holmes challenges those of us who are engaged in astronomy outreach and education, who tend to think that everyone has a basic interest in astronomy.

The image here is from an from an 1892 edition of Adventures of Sherlock Holmes.

*Michael J. Crowe, historian of science and emeritus professor at the University of Notre Dame, who is a big Sherlock Holmes fan.

7  |  History and Geology in the Land of St. Theresa