It is Spring 2015.  You are a student working on a homework assignment concerning the phases of the moon.  You think that a good video might be helpful, so you go to YouTube and type “moon phases” into the search box.  The first result returned by YouTube (after advertisements) is a “Bill Nye the Science Guy” video about moon phases.  Perfect.

You click on that moon phase video, but as it starts to play, other things catch your attention:  to the right of Bill Nye are videos claiming that there are aliens on the moon! that we never went to the moon! and more!  Nonsense is spraying at you, and all you did was search for a video on moon phases.  It may be nonsense, but it may attract your interest—at least enough to be worth a click, and that click will take you into a world far removed from the solid science of your homework.

The above paragraphs concern the results of an actual homework search performed in the spring of 2015 and caught in these screen shots. 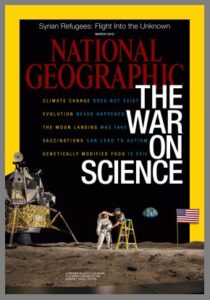 Science is currently plagued by the sort of stuff turned up by the “moon phases” search: by rejection of solid science through conspiracy theories about powerful forces covering up The Truth.  The results of this plague can be entertaining, like Neil deGrasse Tyson on Comedy Central rebutting rapper B.o.B’s claims that the Earth is flat.  However, sometimes the results are serious, like the measles outbreak brought on by rejection of vaccines.  This problem even prompted National Geographic to feature “The War on Science” on the cover of their March 2015 issue.  Plenty of people in the science world, such as Tyson, have put effort into trying to squelch this nonsense, with little success (B.o.B responded to Tyson with the claim that “They” will write Tyson a big check for his part in The Conspiracy to Hide the Flatness of Earth).  Here are two ideas on how to address the nonsense.

First, emphasize the basics of science: that which can be understood and even independently verified by the average person; that which makes the science rejector put his money where his mouth is.  It is true that subjects like time dilation or a multiverse have a certain appeal, no doubt because the world of science fiction (and especially of Hollywood Sci-Fi) superficially taps into them (the movie Interstellar prompted all sorts of questions about time dilation from my students).  But these subjects are outside what can be experimentally tested in most educational settings, and thus are taught purely on the basis of Authority—“time dilation exists; believe me, I know.”  Challenging Authority always carries a certain ‘coolness’ to it, so a subject taught on the basis of Authority is a subject that some will challenge.  However, science is not about Authority.  Talking more about the basics—more about how we know what we know and about how science works—should help more people to understand that, and understand science.

Second, emphasize science’s history.  So often the history of science is told so as to create myths—myths that function, as Richard Rubenstein put it, as “modern morality play[s] in which brave Reason suffers at the hands of villainous Superstition before triumphing in the sunny dawn of Science”—myths in which The Scientist becomes The Hero with The Truth standing against The Minions of Darkness who want Truth suppressed.  Galileo is a prime example—“[Those in authority] believed that faith should dominate; and Galileo believed that truth should persuade,” and so forth.  But as historians of science Ronald Numbers and Kostas Kampourakis have recently noted, “historical myths about science hinder science literacy and advance a distorted portrayal of how science has been—and is—done.”*  And they hinder and distort in a manner that supports the conspiracy theory crowd: every maker of a video claiming that we never went to the moon, or that we went there and found aliens and that’s why we never went back, or whatever, can claim to be a Galileo: a Hero of Science standing up for The Truth against the power of The Minions of Darkness.

Those video makers would have a much harder sell, and their videos would probably not pop up so prominently on YouTube, were the broader public better versed in both the history and the verifiable basics of science.  Less Sci-Fi physics and less mythology might make for less science rejection.  It’s worth a try.  It can’t work any less well than what has been tried against science rejection so far.

And searching for videos on moon phases is still turning up science rejection videos.

The same search (on “moon phases,” clicking on the first result returned) made one year later again leads to videos about aliens on the moon. Each of these videos has had more views than the “Crash Course Astronomy” moon phases video featuring astronomer Phil Plait.