The southern predawn sky hasn’t changed much in the last week; Saturn, Mars, Jupiter, Antares and Spica are splashed across the sky, with Mars getting a little closer to Saturn each morning.

On Mar. 1st, the Moon will be 0° 5′ from Regulus in the constellation Leo. 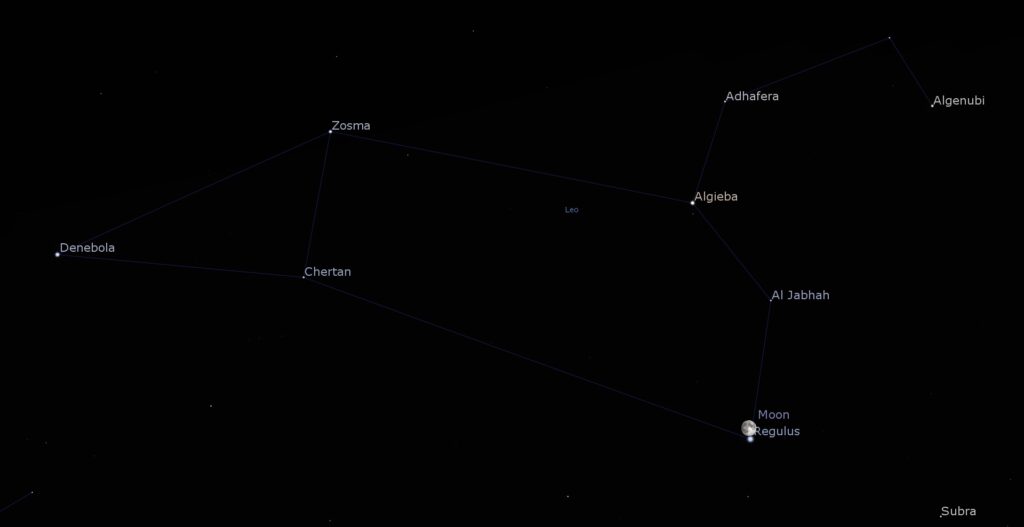 This would make an excellent conjunction to view through binoculars! 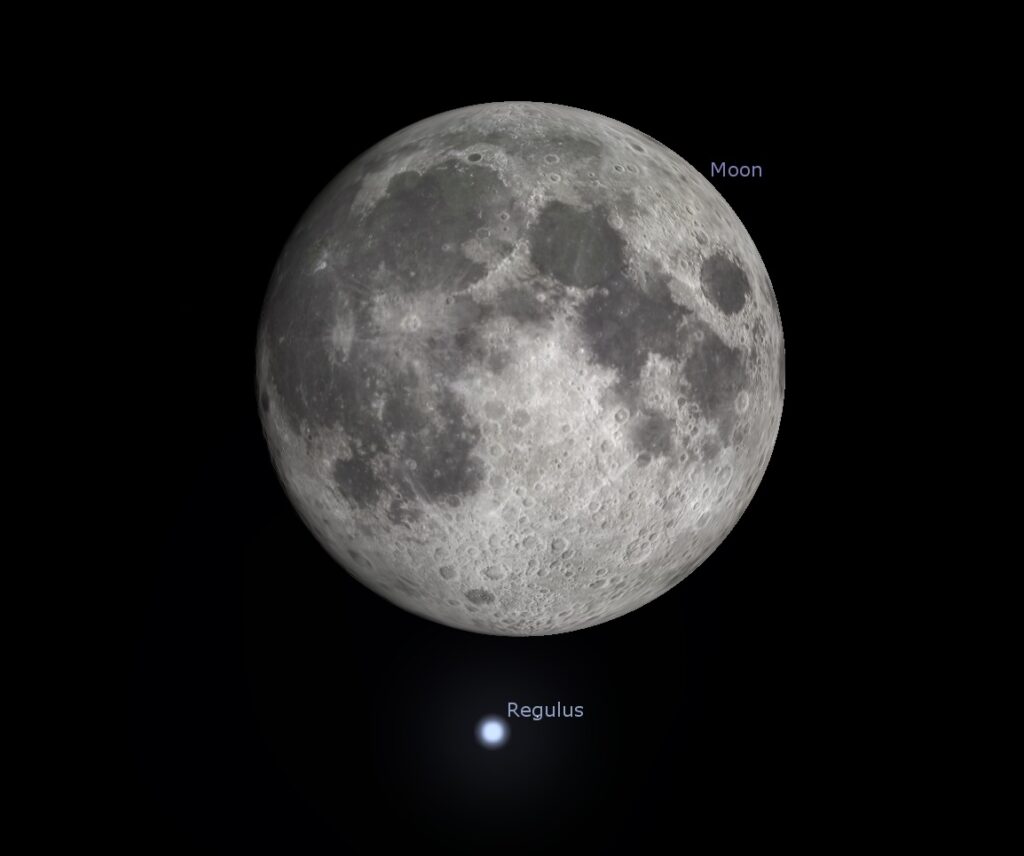 The Moon plows through the star and planet party in the southern predawn sky from Mar. 4-12

Winter constellations are still in the southern sky after sunset, but they are setting earlier each day as spring approaches. 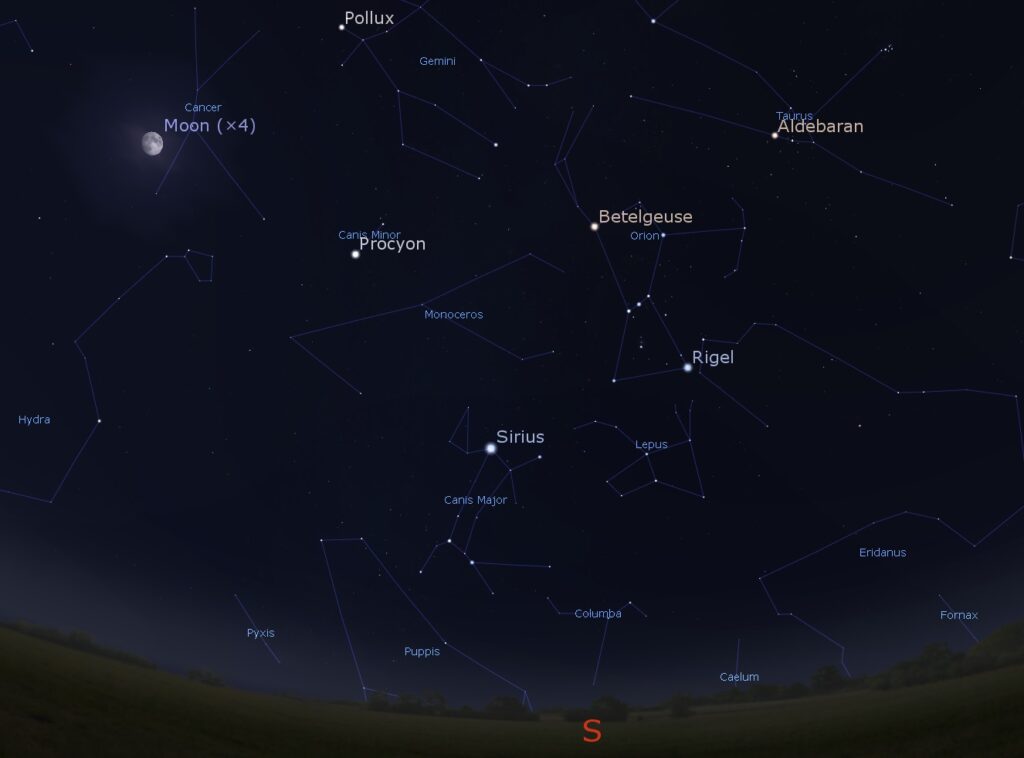 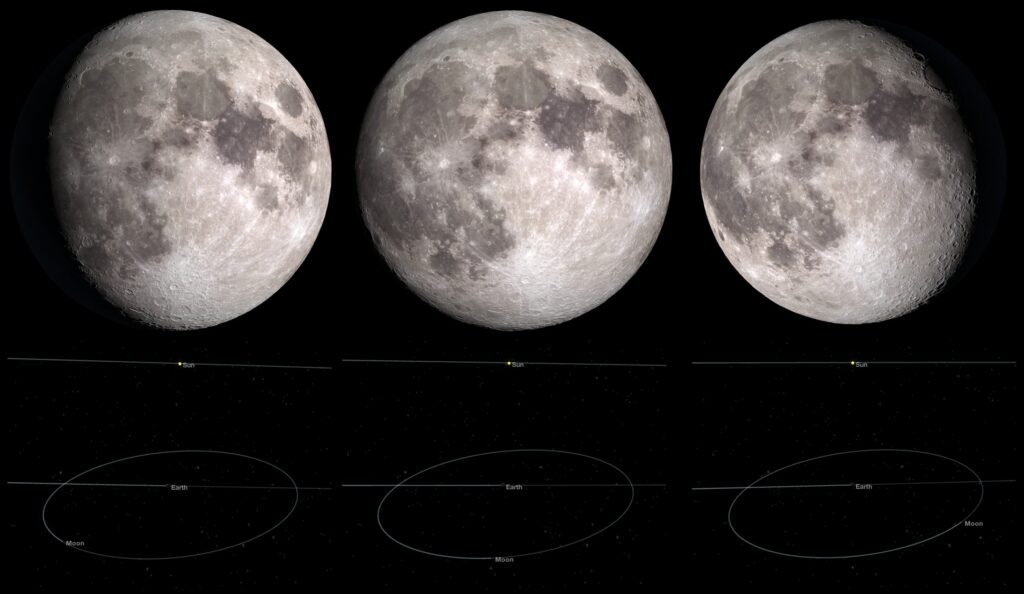 The Moon this week. Moon visualizations by Ernie Wright, Moon orbit from NASA Eyes on the Solar System / Bob Trembley.

The Moon is a waxing gibbous visible in the eastern sky during the afternoon and setting shortly after 5:00 AM. The Moon will be full on Mar. 2nd, and will be a waning gibbous afterwards.

A small new sunspot group, named AR2700 (AR=Active Region) is crossing the face of the Sun; while flare-free, it is showing a lot of coronal loop activity. SpaceWeather.com says: “New sunspot AR2700 has a simple, stable magnetic field that poses little threat for solar flares.” 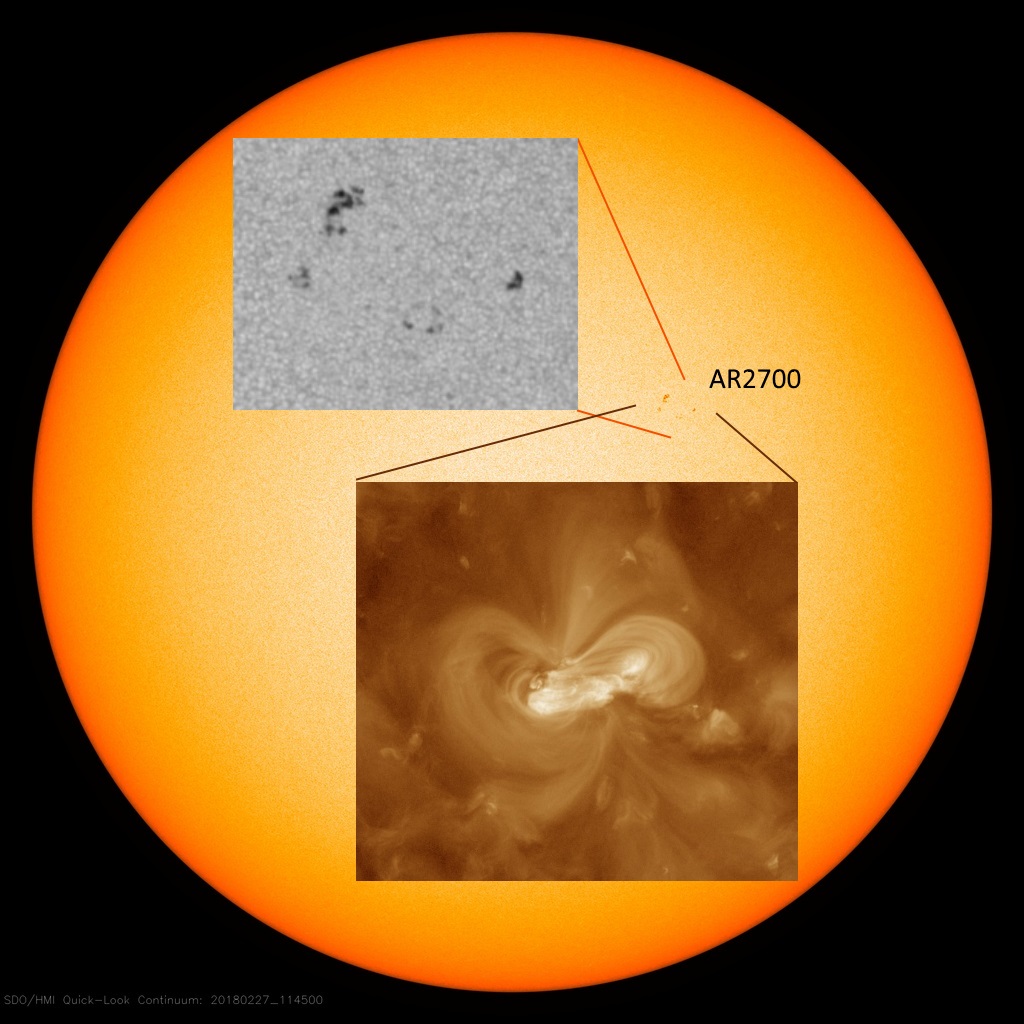 This video shows the Sun’s corona for the last 48 hours; you’ll note the rather large coronal holes at both poles, and the coronal looping activity over sunspot  AR2700.

The solar wind speed is 513 km/sec, with a density of 8.0 protons/cm3– the highest solar wind density I’ve seen it since I started reporting it. SpaceWeather.com is reporting a G1-class geomagnetic storm happening right now as Earth enters this fast-moving stream of solar wind. Aurora have been photographed from several northerly locations: 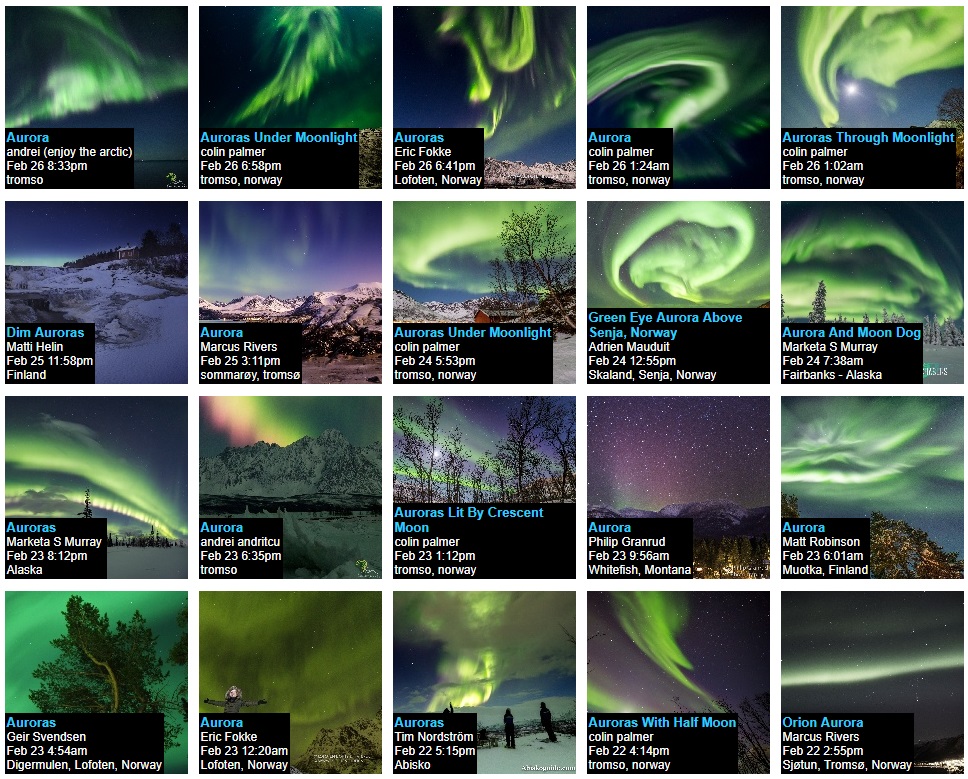 Again, there are several prominences in the Sun’s chromosphere over the last several days – I especially like the rotating pillar at the 8:00 o’clock position. AR2700 shows some visible activity in this frequency, but does not show off the spectacular coronal loops as in the SDO video above. 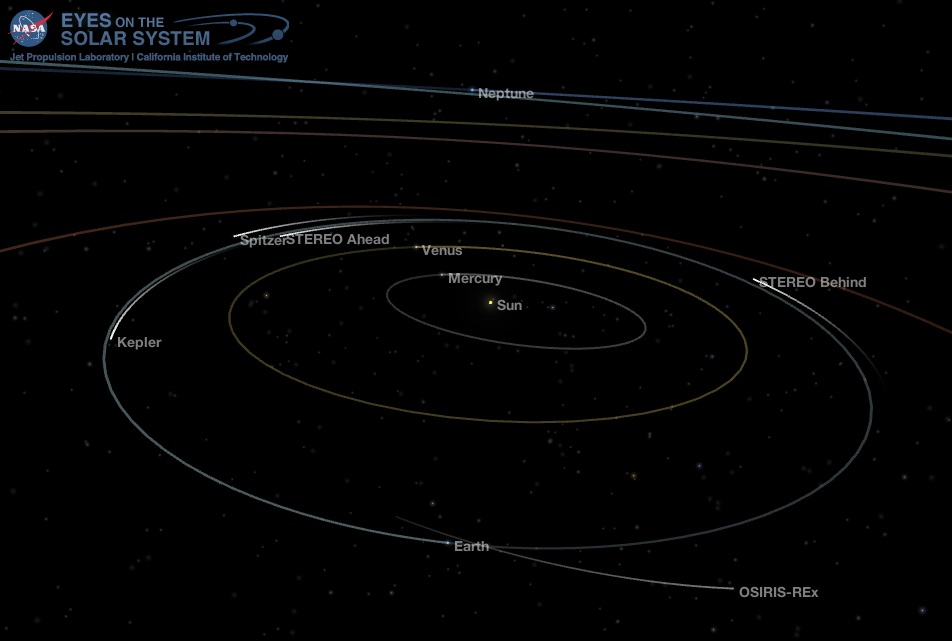 Position of the planets in the solar system, Feb. 27, 2018. Credit: NASA Eyes on the Solar System / Bob Trembley. 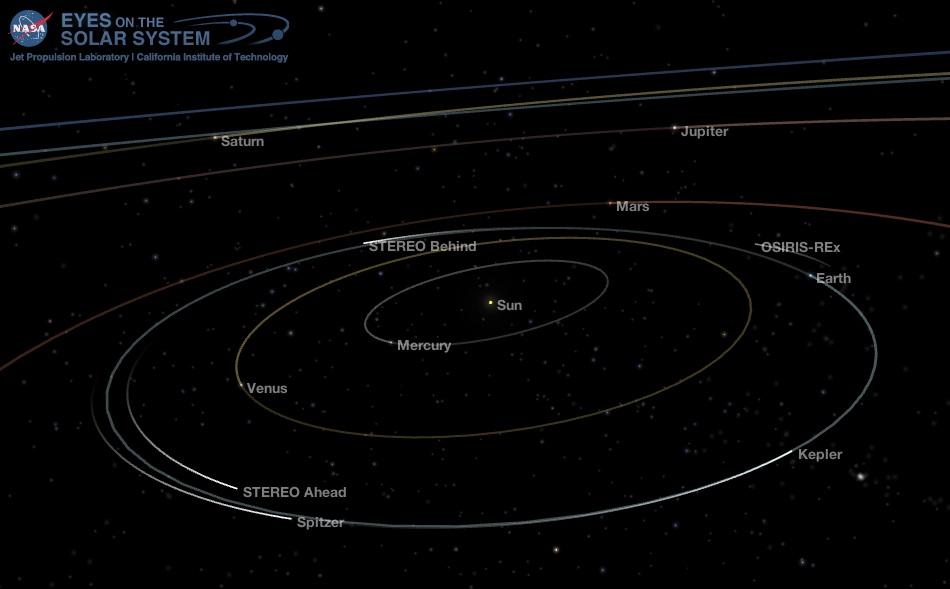 Position of the planets in the solar system (side view), Feb. 27, 2018. Credit: NASA Eyes on the Solar System / Bob Trembley.