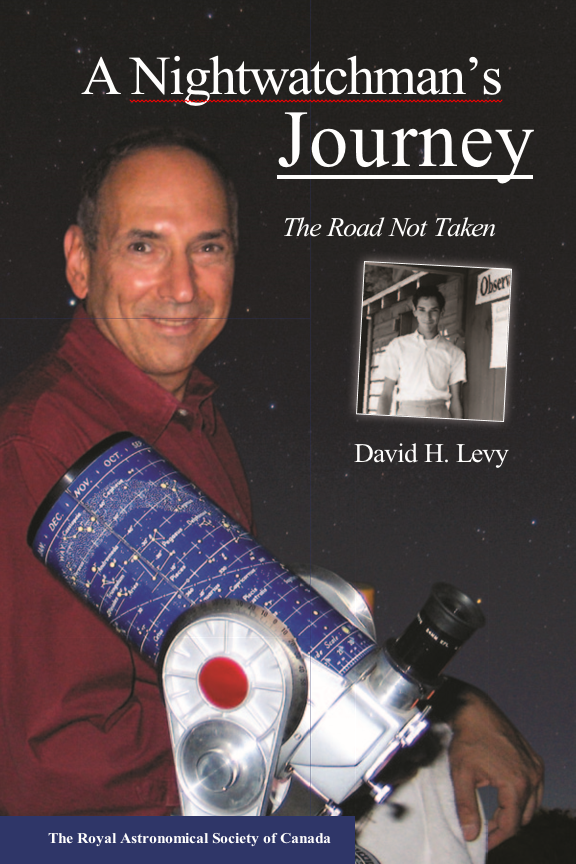 A Nightwatchman’s Journey: The Road Not Taken

On Friday, June 14, my latest book, my autobiography titled A Nightwatchman’s Journey: The Road not Taken was launched at the Royal Astronomical Society’s General Assembly in Toronto. It is a book I have been working on for almost a decade, and it is the story of my life. The book begins in medias res, in the midst of a suicide attempt that happened shortly after I graduated from Acadia. I have suffered from depression throughout my life, but this book describes my efforts to conquer it. It tells of how I made many poor decisions in my life, but how two of them were good. The best decision was marrying Wendee, which I did in 1997 and with whom I have had 22 happy years. The other one was to begin, on December 17, 1965, a search for comets.

It took me nineteen years, searching with telescopes for 917 hours 28 minutes, before I finally found my first comet in 1984. Since then I have found 22 more. One was an electronic find shared with Tom Glinos in 2010. Thirteen were photographic film discoveries shared with Gene and Carolyn Shoemaker (including Shoemaker-Levy 9 which collided with Jupiter in 1994) and there were nine visual comet finds. If the first seventy-one years of my life had been just staring through the eyepiece of a telescope, however, there would not have been much to write about. What happened on the road less travelled by, like Robert Frost, has made all the difference.

Comets, I learned, are not just for viewing. They are for reading and for studying. At first, I did some high school reading about the discovery of Comet Ikeya-Seki, the brightest comet of the twentieth century. Years later in graduate school at Canada’s Queen’s University, I prepared a master’s thesis based on the 19th century English poet Gerard Manley Hopkins, who observed Comet Tempel in 1864 and subsequently wrote a beautiful poem about it. But the writer who seemed to be most into astronomy, and whose love of the sky I turned into my Ph.D., was none other than the great William Shakespeare, whose collected works contain more than two hundred references to the sky, including the opening lines to I Henry VI, one of his earliest plays:

Hung be the heavens with black, yield day to night!
Comets, importing change of times and states,
Brandish your crystal tresses in the sky.

Even now, when I spend an evening or all night under the stars, I am amazed to be able to share my experiences with so many people, in all walks of life, who have come before me. Taking a road “that was grassy and wanted wear” might have been risky, but it did point me toward many adventures I’ll never forget.

David’s autobiography is available from the Royal Astronomical Society of Canada (www.rasc.ca) or from Starizona (www.starizona.com) in Tucson, AZ.

This video and related article from NASA describe the historic comet Shoemaker-Levy 9 impacts on Jupiter, and the creation of NASA’s Planetary Defense Coordination Office (PDCO). – Editor