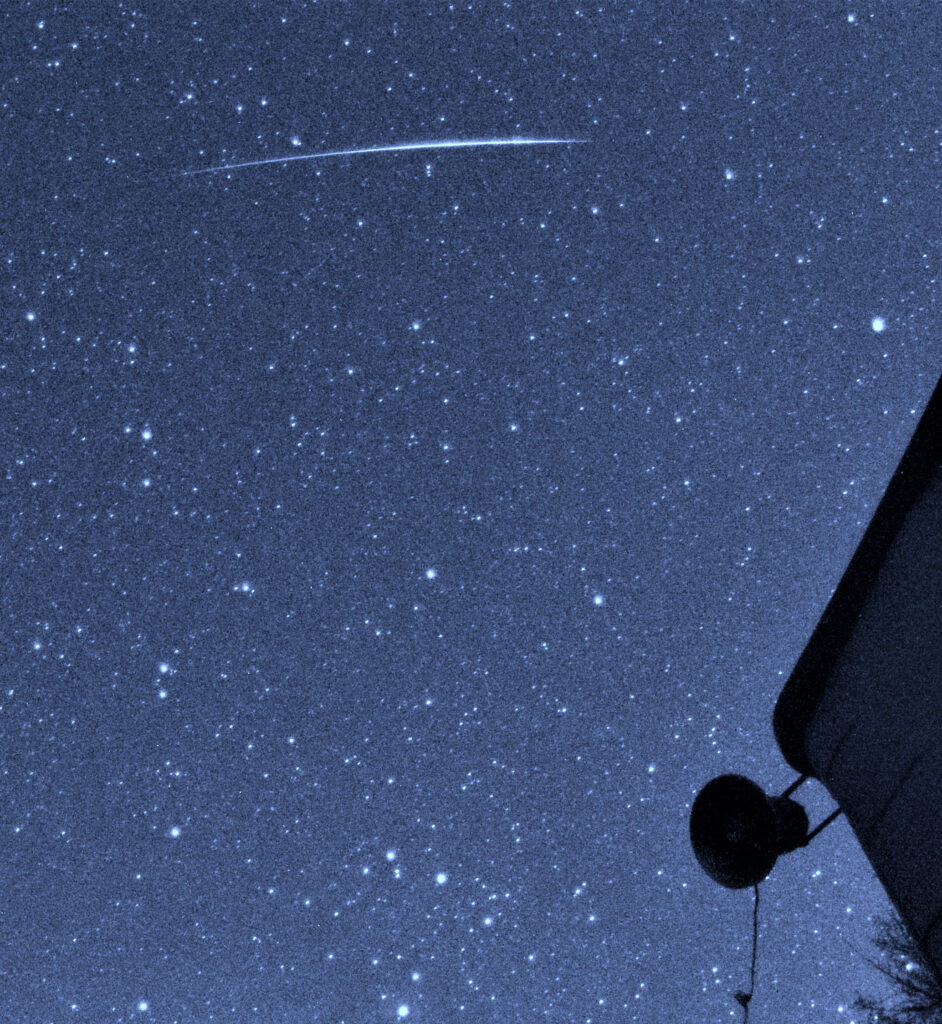 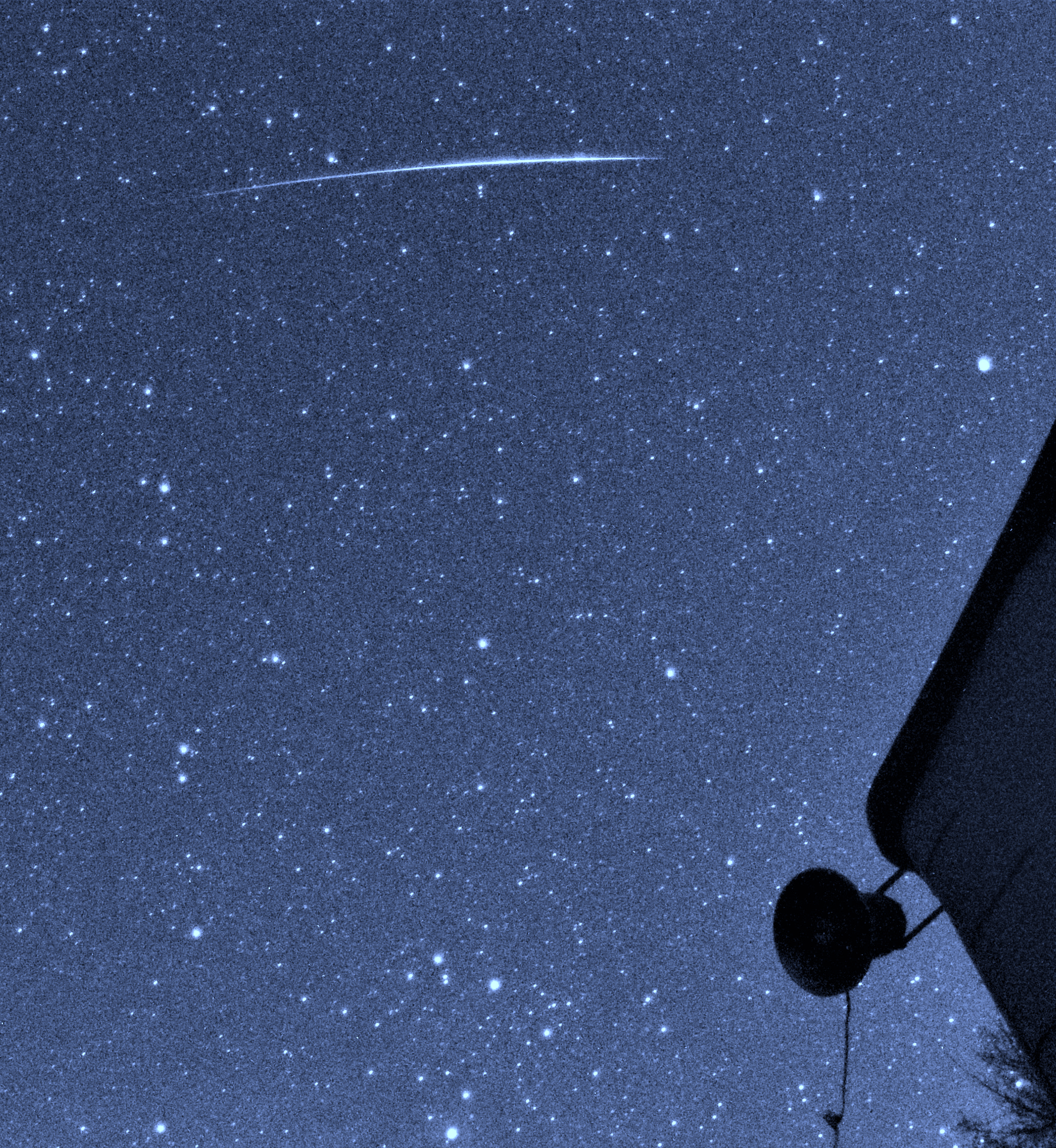 This is the brightest Lyrid I saw, and rec ordered on the night of April 21, 2020. Credit: David H. Levy

Plenty of telescopes grace my observatory, but I still enjoy watching shooting stars, or meteors, more than anything else. This year, after a break of several months, the Earth passed through the Lyrid meteor stream on the night of April 21. The meteor shower takes place when the Earth encounters dust from Comet Thatcher, a comet that last appeared in 1861. I captured five meteors with my camera, of which one accompanies this article. As I relaxed outdoors during this time, the memories began to flood back.

My first experience with the Lyrids was on April 22, 1963. I was at the time a patient at the Jewish National Home for Asthmatic Children in Denver. I wrote it up this way in my diary: “I had a regular day today, until tonight. I went out and saw a fireball (a very bright meteor.)  Then a big, fat, hunk of cloud came over. I saw no more meteors.” The next night was also cloudy, and I saw no further meteors despite being outside for several hours. “I officially considered this year’s meteor shower the most disappointing failure I have ever had.” Not for long, however; I have been blessed with many far more spectacular failures since then.

My love of the night sky goes back many years, to around 1960, but as I grew older I also developed a strong interest in literature, and that passion stems directly from my Dad. I honestly feel that if I had not inherited his love of Shakespearean in particular, he might have taken me out of his will. And I believe he was pleased when I took up English Literature at Acadia University in the 1970s. But I recall back then, reading about Shakespeare’s references to eclipses in King Lear, and hardly giving them a second thought.

The next Lyrid shower I was part of took place on April 23, 1976. I was engaged at the time to my “practice wife.” (That marriage lasted barely two years.)  That Friday evening was clear and I was part of a team organized by the Montreal Centre of the Royal Astronomical Society of Canada. The sky was clear and we saw several meteors. As I enjoyed the night, my mind roamed a little. I wondered about how many other amateur astronomers might have enjoyed this particular meteor shower in earlier times. I also thought of writers who might have written about the sky. I was aware that Shakespeare wrote about eclipses (specifically in King Lear) and about meteors and comets as well. At that very moment I decided that for my master’s thesis I would write about poets who have loved the night sky. The poet I concentrated on, at Queen’s University, was Gerard Manley Hopkins.

Decades later, I finally received my Ph. D. from the Hebrew University, for the dissertation on Shakespeare’s many references and allusions to the night sky. Among the hundreds of allusions I found, here is one from Richard II that looks on meteors and a lunar eclipse:

’Tis thought the king is dead; we will not stay.
The bay-trees in our country are all wither’d
And meteors fright the fixed stars of heaven;
The pale-faced moon looks bloody on the earth. . . (2.4.1337-1340)

The Lyrid meteor shower brings me back to the hazy dawn of my life, and my passion for astronomy. May a shooting star brighten your nights as well. 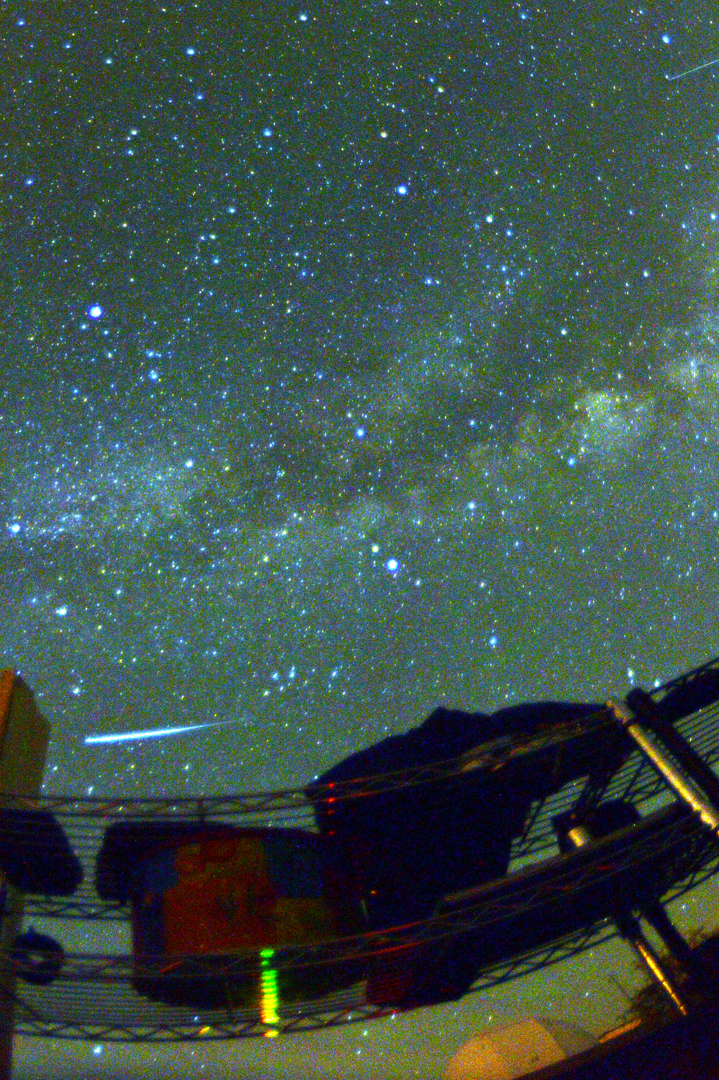 A number of years ago I recorded this Eta Aquarid meteor while observing Lyrids. This particular meteor is a large particle of dust from Halley’s comet. Credit: David H. Levy