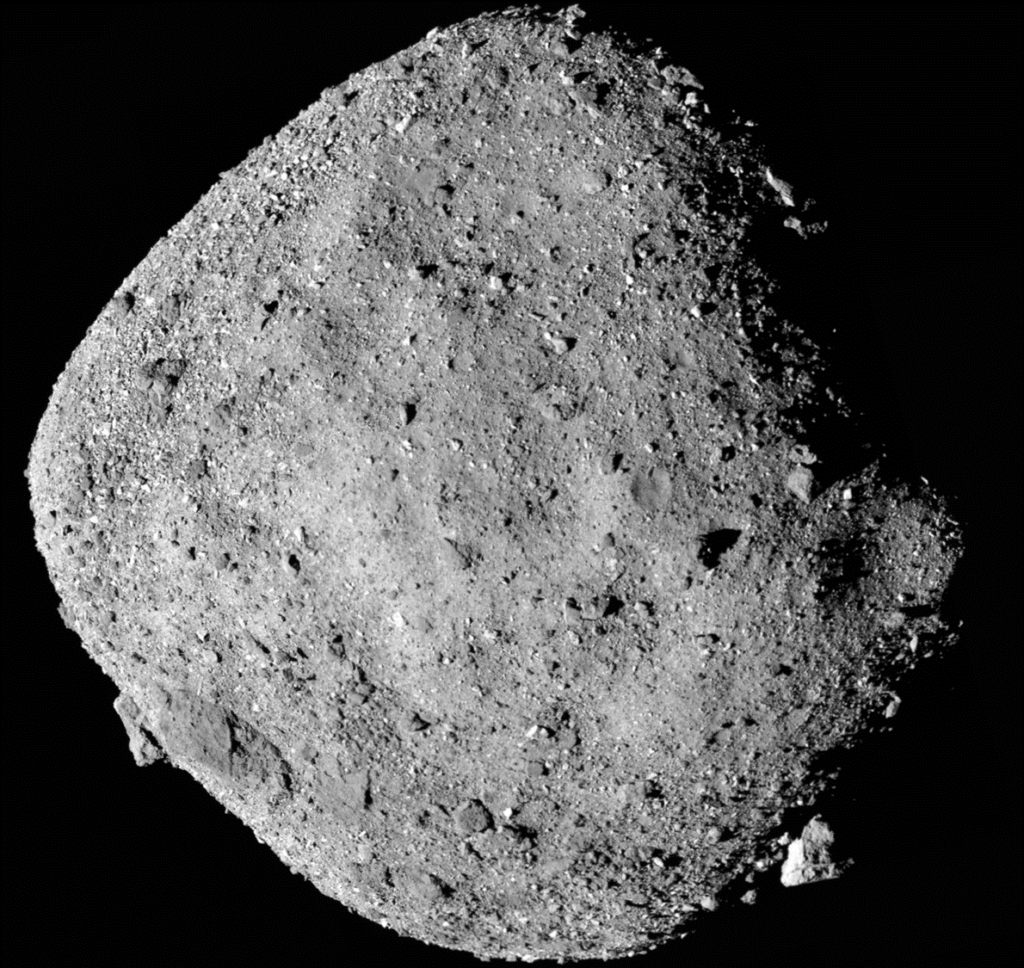 Not long ago OSIRIS-REx, a spacecraft sponsored by the University of Arizona and flown by NASA gently touched the surface of asteroid No. 101955, an asteroid named Bennu, tried to grab some material, and then quickly took off again. It was the first try, but it was a huge success! The craft gathered more than twice what was expected—so much that some small pieces of material started to leak out.

Of course, if all the sample leaked out, then there was no sample. But that won’t happen. NASA plans to transfer the material to a safe storage container earlier than expected, and then the sample will be safe.

The mission, run jointly by NASA and the University of Arizona, cost the U.S. taxpayers about eight hundred million dollars, plus about 185 million for the launch aboard an Atlas V rocket. OSIRIS-REx is an acronym for Origins, Spectral Interpretation, Resource Identification, Security, Regolith Explorer. Asteroid Bennu is an interesting choice. Bennu was the name for an Egyptian mythological bird associated with creation, the Sun, and rebirth. But much as the name might inspire us to look back at the early days of our solar system (which it does), that’s not the real reason this particular asteroid was chosen. Bennu is a C-type asteroid. It is also a sort of time capsule dating back to the birth and early evolution of the solar system. C is for carbonaceous asteroid, but it is a B sub-type because it is primitive. The reason for this is that it had undergone almost no geological change since it formed.

Especially if you pay taxes to the government of the United States, you may wonder why more than 800 million dollars was sent to this distant spot of light in the sky. I could begin to answer this by saying that Bennu’s sample will teach us about what the solar system was made of at its formation. From that, Bennu could give us a healthy idea about what the Earth itself was like at its birth. Sometime after it was formed, its orbit changed so that now, every few dozen years it gets pretty close to Earth. There is a very small chance that it might hit Earth in the distant future. Dolores Hill, a long-time member of the OSIRIS-REx team adds: “NASA sent this mission to Bennu, a primitive body, to return a pristine, protected sample so we could better understand the beginning and history of the solar system, formation of organic compounds important to life, and understand how Main-belt asteroids migrate to the inner solar system to become Near-earth asteroids.”

All this is fine, but couldn’t that money be better spent on Earth, to feed the starving, cure those afflicted with coronavirus, house the homeless, and do all the other things we thought we could do when we decided to go to the Moon in the 1960s?

Yes, it could. Except for one thing. Going to the Moon seemed pointless until we all were glued to television, watching breathlessly as one human stepped onto the surface of another world. Dear readers, we are explorers. It is in our blood, our DNA, in our hopes and dreams. And in the midst of this horrible pandemic, a small piece of human-built machinery tapped the surface of a distant world and grabbed a sample. Indeed, space journeys like this one help make life worth living. We live here. This is our neighborhood. We reach for the stars.

Editor: The OSIRIS-REx sample head was successfully stowed in the sample return capsule on Oct. 29.

Then I closed up the capsule last night. Definitely a little bittersweet! But I'm excited to get this sample to my team on Earth ?

Read more about what the stow process looked like: https://t.co/qGiWRy6CZ7 pic.twitter.com/DOse6cEqnU

Cover Image: Mosaic image of asteroid Bennu is composed of 12 PolyCam images collected on Dec. 2, 2018 by the OSIRIS-REx spacecraft from a range of 15 miles (24 km). Credits: NASA/Goddard/University of Arizona