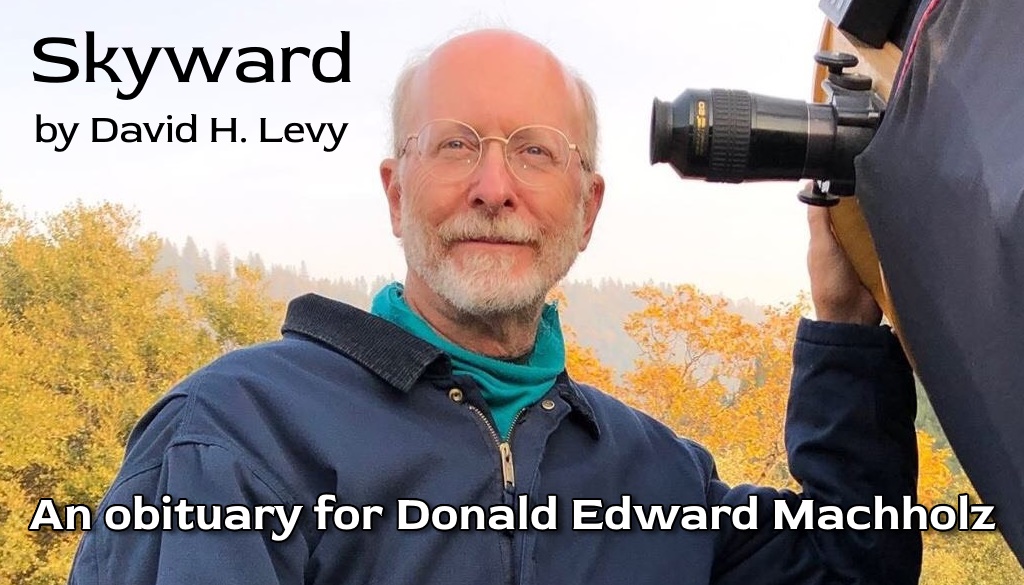 An obituary for Donald Edward Machholz

You left us far too soon, my friend. From your home in California and later in Arizona, you lived quietly and well, with a passion for stargazing that dominated your life.

As the English poet Gerard Manley Hopkins wrote, “I am like a slip of comet, Scarce worth discovery.” He wrote his poem in 1864 but it might have been composed with you in mind. You were born on October 7, 1952, in Portsmouth, Virginia. I first heard of you during the 1970s, when you were popularizing a program to observe all (or almost all) the Messier objects in the sky, in a single night. I did not take the idea seriously for a long time. I have seen all the Messier objects, but I found them over a relaxing period of five years, from Messier 45 (The Pleiades star cluster) during the summer of 1962, to the distant and ethereal galaxy Messier 83, in the spring of 1987. Your idea was to learn the sky far more thoroughly than I did, and catch all the clusters, clouds of gas and dust, and distant galaxies that Charles Messier carefully recorded. (Messier himself was an 18th century hunter of comets, but he is known more for his catalogue.)

Thank you for inspiring me. By the mid-1980s, I was more proficient in observing than I was in earlier decades. One clear night in the early spring of 1983, I successfully observed all but one of the Messier objects. Messier 30 was the only one I missed that night.

By that time, Don, you were already famous. In 1978, after some 1700 hours of searching, you discovered your first comet using your simple telescope. (You never gave up, did you?) I thought of your success on that beautiful quiet night. In 1985, on the final night of the Riverside Telescope Maker’s Conference that year, you discovered a second comet after another 1700 hours. You used a beautiful 10-inch cardboard and glass telescope for that second comet. (You really never gave up, did you.) Luck began to go your way after that. Your third comet arrived in 1986. You used a pair of 29 x 130 binoculars for that one. Right in between the passages of your second and third comets, Comet Halley, the most important and famous comet of them all, rounded the Sun on February 9, 1986. I like to think that as the great Halley’s comet made its pass through the inner solar system, it was guarded by these two other comets discovered
by you.

Don, you never ever quit. No one would have criticized you if you had. Instead, you spent the remaining years of your life searching the sky. You spent almost nine thousand hours over the course of your life comet hunting. Through it all, you never lost your passion for watching the sky. You and I share that one important aspect, Don. As many comets as you and I might have found, it was the search that was so important, for “in no better way,” as Leslie Peltier wrote:

“can we come face to face, night after night, with such a wealth of riches as old Croesus never dreamed of.”

In recent years the professional astronomers have taken over comet discoveries. But still you kept on searching. Despite their great big telescopes, you kept going, always searching, with a series of small telescopes. You found two new comets in 1994, one of which broke apart into several pieces.

By the start of the new millennium, amateur astronomers had pretty much given up. Visual comet hunting, was passé. No more. Only not for you. You discovered not one, not two, but three comets since the year 2004 and as of August 2022, you were the leading discoverer of comets by visual means in the world.

Don, I wish I had known you better. I do know I shall miss you, and our friendship which has evolved over the years, very much. I conclude this letter, this obituary, with the end of the Hopkins poem:

“But then her tether calls her. She falls off,
And as she dwindles sheds her smock of gold…
So I go out. My little sweet is done.
I have drawn heat from this contagious sun,
To not ungentle death now forth I run.