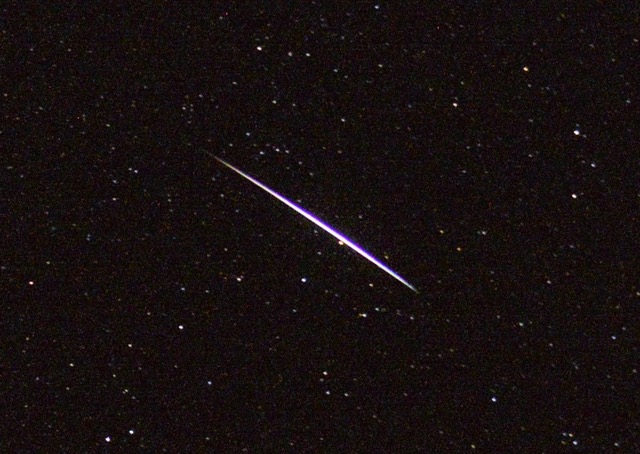 The Geminids! The Geminids are the most active, surprising, gorgeous, and wonderful meteor shower of the entire year. I recall first observing this meteor shower on December 13, 1961 from Montreal. During observing session No.12E that night, I observed 15 meteors. Over the decades since then, I have counted thousands of Geminid meteors, all appearing to radiate from a point in the sky within the constellation of Gemini. 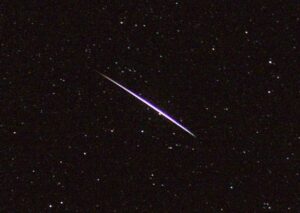 The Geminids are the richest meteor shower of the year, but the 2017 version was fantastic even by its own standards. During session 20201RM2 on December 13, 2017 (I’ve had lots of observing sessions since 1961), over the course of about 90 minutes, I counted 64 meteors, of which some were so bright that I captured them on film. The attached pictures show two versions of the brightest meteor I saw that night. One includes a view of the sky over the Jarnac Observatory including that wondrous shooting star as it scratched the sky; the other is a detailed view of that meteor.

When we see a meteor we are not looking at the dust-sized speck that is encountering the Earth’s atmosphere. But as the speck races through the atmosphere at a velocity of 22 miles per second, it heats the surrounding air to incandescence, and that is what we see as a meteor.

All meteor showers originate from comets. At least we thought they did until October of 1983, when the Infrared Astronomy Satellite (IRAS) discovered an asteroid now known as 3200 Phaethon. This object may be an asteroid. But because it travels about the Sun in a long, looping orbit that takes it closer to the Sun than Mercury is, and then it swings out towards Jupiter before returning. Phaethon’s orbit is more like that of a comet than like an asteroid. In any event, the famous comet astronomer Fred Whipple, after studying the orbit of Phaethon, concluded that its orbit is the same as the orbits of the Geminids. Therefore, Phaethon is the “parent object” of this meteor shower. 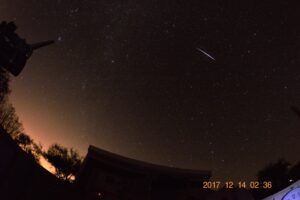 I was actually observing atop Kitt Peak in October 1983, and since then I have always wanted to see Phaethon. I had that opportunity this December 17, but it wasn’t easy. Twice, early that evening I thought I had detected starlike objects that could be Phaethon, only to find then still plastered to the sky in their same stellar positions later. The third one was much fainter, but when I went out to check on it later, it had disappeared. It must have moved on, as Phaethon should have, and did. Phaethon has no evidence of a tail or even a coma of dust surrounding it. If it was a comet once, it isn’t any more. But every December 13, debris from it encounters the Earth in a marvelous, unforgettable shower of shooting stars that tickle the sky.