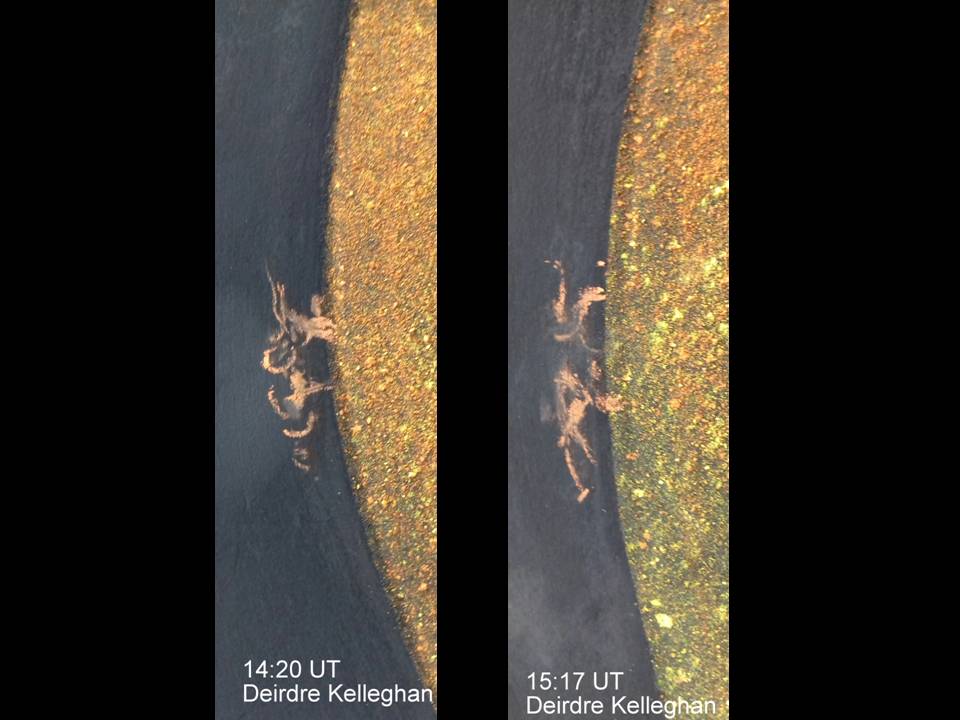 On my 50th birthday my better half gave me a present of a PST 40 (Personal Solar Telescope) with a 40 mm objective. This gift was literally a piece of visual heaven. Since I acquired this fabulous instrument my work with it has always been drawing. Drawing the sun or even drawing features on the sun is without a doubt the biggest challenge in astronomical drawing.

Here is the thing, the telescope objective is just 40 mm, the sun as I see it is only about 30 mm of that 40mm to the eye. Using an 8 mm eyepiece gives about a 50X magnification and therefore the best view of the features and action on the disc and on the limb. There is no point whatsoever in drawing something at a diameter of 30 mm unless you provide your viewers with magnifying glasses or the object is a daisy. Therefore I work mostly at dinner plate size, sometimes at side plate size, and occasionally at CD size. Drawing at this size at least gives me room to draw directly from my eye to the page keeping faithful to accuracy. What I see I draw, nothing is ever added or taken away,it is what it is.

In drawing the sun I am dealing with prominences,filaments and active regions that in reality are hundreds of thousands of kilometres long ,wide,and high. However to my eye they are tiny fractions of millimetres for the most part. Then there is the mottling, millions of dots all over the sun which seem to line themselves up with magnetic field lines emanating from active regions. These dots are the bane of my solar drawing life. They are the features that are most difficult to capture in a h-alpha drawing as the patterns they make are very complex and are all over the disc. They are known as spicules when viewed on the edge of the limb but fibrils when viewed on the disc.

These are tubes of gas rising up to 10,000 km above the solar disc on the limb or on the disc (as fibrils). The same activity in a different position on the sun.They are short-lived tubes of energy held together by magnetic force . Think of them like thousands of kilometre high straws with invisible walls. They appear to the eye as tiny dots face on however they are carrying super heated gases, moving at circa 20 km per second upwards for 15 to 20 minutes covering up to 10,000 km in height before collapsing back the way they came. This action is going on all over the sun all the time, in non active regions these are known as mottles. It is difficult to imagine what it must be like. It is a demonstration of power contained, power sustained,one facet in the mesmerizing action on our star. 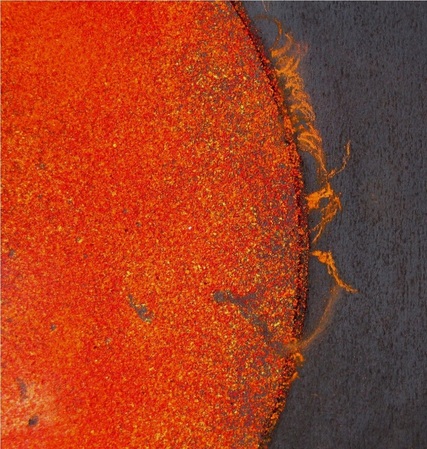 In another example prominences and filaments are also the same activity sharing a duality in naming. Eruptions of charged hydrogen and helium gas (plasma) viewed on the limb are known as prominences while the same actions seen against the disc are known as filaments. The visual hybrids are known as filaproms, i.e. eruptions of gas from an active region that is usually close to the limb. In these cases the erupting gases rise up appearing dark against the disc (a filament) because the material is cooler against the hotter disc below. That powerful expulsion of gases then arcs its way over the limb appearing bright against the blackness of space (a prominence) .Viewing these particular actions sometimes offers a three-dimensional appearance to the eye. These events clearly show the distances above the chromosphere which these massive prominences can travel. Occasionally enormous prominences leave the sun entirely and send their particles to collide with particles in our Earth’s atmosphere producing the aurora borealis for lucky observers to relish.

While observing you do not see eruptions moving in real-time because of the distance between the eye and the sun. However if you observe and sketch something of interest,wait about 15 minutes and repeat the drawing you will see changes.For me this is most interesting when there are proms on the limb making interesting twisting shapes. The gas seems to make loops, beside loops,beside loops. They whip up and out from the limb creating twists like ropes with both fine and thick bundles to watch. Often it’s the empty spaces in those loops that help my drawing to be as accurate as I can make it. The prominence loops form because the gas is following the shape of invisible magnetic loops. In a way these eruptions reveal the shapes of the suns magnetic activity. Mostly eruptions of gas from the sun are in arc shapes anchored in two places, rooted to the sun by magnetism. Within this arc there may be many arcs busy above the disc. It is an enrapturing visual experience and an equally compelling task to capture these features on paper. The effort of drawing involves many repeated views of the same tiny area , along with continuous repeated tuning and focusing in order to get the clearest view possible.

Observing the sun can be a very dangerous, no viewing of the solar disc should be carried out without a highly filtered telescope in the hands of someone who knows what they are doing.
If you have never had the opportunity to observe the sun in a h-alpha telescope you should try to create that moment for yourself. Seek out someone who has an instrument like this so you can indulge yourself with the intricacies of our mother star. Your local astronomy club or public observatory would be the first place I would go for safe incredible views . Your eyeball and our sun,millions of miles distant but up close and personal.