There were two bald eagles soaring over the Ohio River in Louisville, Kentucky one Saturday this past October.  My wife and I saw them while we were taking a walk on a brisk, fall day.  They were wheeling far overhead in a perfect azure sky.  It was October 12.  The eagles were not soaring over some remote part of the Ohio River—they were on the river where it passes right between the downtowns of Louisville on one side, and Jeffersonville, Indiana on the other.  Below the eagles were bridges, boats, cars, buildings, parks, and lots of people out enjoying the day.

The first time I ever saw a bald eagle in the wild was also on the Ohio River.  This was in the early 2000s, when my family was exploring a remote area west of Leavenworth, Indiana.  Then, a few years later, when my college’s observatory was located in Otter Creek Park, on the river well south-east of Louisville, everyone at the park was thrilled to discover a nesting pair of bald eagles on the river there.  The eagles were a big deal.  The location of the nest was not widely discussed, for fear that it would draw enough sightseers that the eagles would be disturbed and leave.  A few years after that, there were bald eagles hanging around the Farnsley-Moremen Landing, a historic home and park on the river in the south-eastern outskirts of Louisville.  My family had come to visit the park, and we noticed a crowd of people with telescopes, binoculars, and cameras.  The eagles seemed not to care. 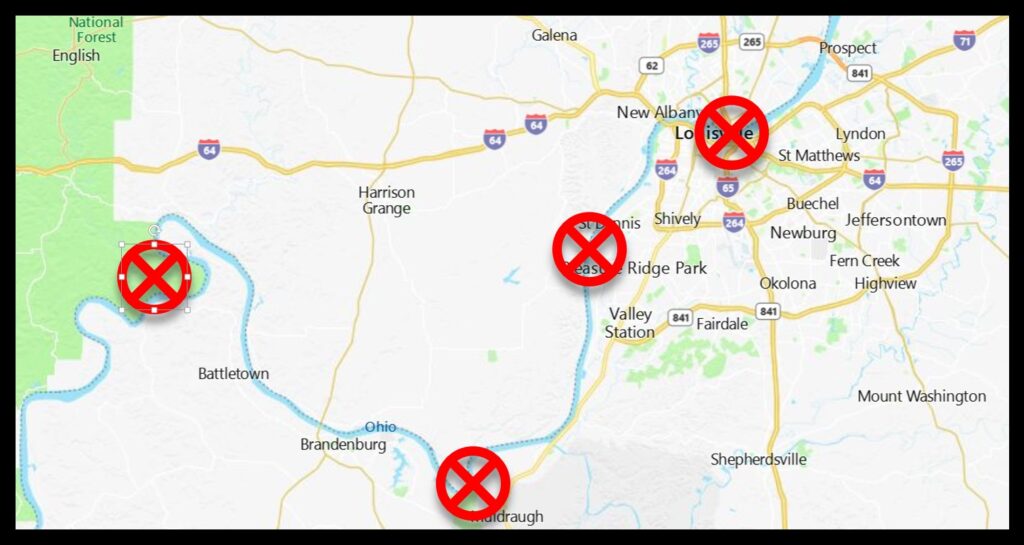 When I was a kid, if Kentuckians wanted to see bald eagles, they went to some place else—like Alaska.  I remember hearing one of my relatives talk about seeing bald eagles in Alaska.  If you wanted to see an eagle soaring overhead in Kentucky, your best bet was the constellation Aquila.  Even hawks were not common in developed areas. 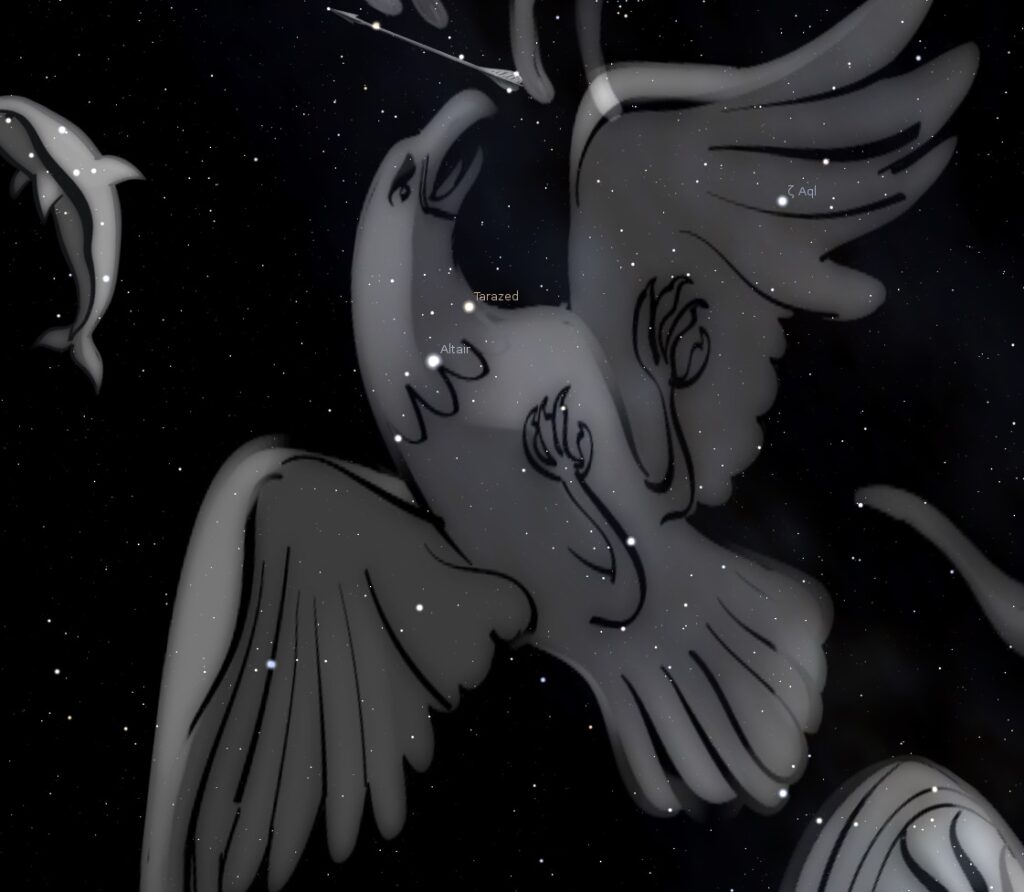 The constellation Aquila the eagle, per the Stellarium planetarium app.

Today you can be right smack in the center of Kentucky’s largest urban area and look up to see a pair of bald eagles while taking a stroll in a park.  And the parks of the city are full of hawks and owls.  Peregrine falcons rest on bridges over the Ohio River.

When I was young, I read that the presence or absence of “apex predators” like the bald eagle—king of the sky, the biggest, baddest thing on wings—was an indication of the health of an ecosystem.  The fact that there were no eagles was a sign of bad ecological health; toxins in the environment worked their way up the food chain, and apex predators, who ate things that ate the toxins, could not survive.  I have seen the eagles return over my lifetime.  And I have seen the return of hawks and falcons and owls (the park near my house is full of hooting at night).  And of impressively antlered bucks, standing alongside roads and bike trails and paths (or along the river in central Louisville) and watching people and cars go by.  And of flocks of wild turkey.  And of elk and bear in Kentucky’s more mountainous regions.  None of these were to be found when I was a kid.

So I understand those in my state who might take a skeptical view toward claims that the Earth is in environmental peril.  They might hear a statement like this, which came from NPR’s Rachel Martin on “Morning Edition” one day in October—

The threat from climate change is so massive, so apocalyptic, it can be hard to wrap your head around. [October 16, 2019]

—and they might say, “Really?  Tell that to the eagles.”  Is it unreasonable for skeptics to react with disbelief to statements like this when it seems like the environment is rapidly regaining ground, right before their eyes?  Or consider this statement:

The earth, our home, is beginning to look more and more like an immense pile of filth.

That is from Pope Francis (Laudato Si, paragraph 21; also June 18, 2015 @Pontifex).  Again, might not a skeptic from Kentucky legitimately scoff?—especially one who recalls that, not so long ago, what you saw when you looked up to the sky from downtown Louisville was likely to be a filthy, polluted, yellow sky, and not eagles soaring in an azure sky?  ‘More and more like a pile of filth?’  Tell that to the eagles.  Perhaps, our skeptic might say, the Vatican is making the same sort of mistake that it made when it opposed the Copernican theory: offering opinions on matters of science in which further information might yet come forth.

Moreover, our skeptic might say, Kentucky is not a wealthy state.  Kentucky needs economic growth to improve the lives of Kentuckians—to provide jobs, education, and opportunities, and to have less people hopeless and addicted to opiates.  Our skeptic might even think we have already given up too much for those soaring eagles.

But there is another story about October and soaring in Louisville, Kentucky.  A week prior to that brisk fall day with the eagles soaring in the perfect sky, something else was soaring: the temperature.  The first days of October saw temperatures in the upper 90s (°F) / mid-upper 30s (°C).  Temperature records were shattered.  Existing high temperature records were topped by 5°F / 3°C.  This followed a September that itself shattered high-temperature records, and that was nearly devoid of rain.  High 90s is hot in Louisville, even in July.  But high 90s in late September and early October?  When the days are shorter than the nights?  With no rain, the grass brown, and plants wilting?  Perhaps the word “apocalyptic” does come to mind.  Happily, the rain came, and the temperatures fell, so that by October 12 we had a perfect, brisk fall day to see those eagles.

The theory behind human-caused climate change is not complex: the idea is that human activity is altering the composition of Earth’s atmosphere, and altering it in such a way as to cause it to retain heat more efficiently.  The theory is not new.  In 1866 Fr. Angelo Secchi, a pioneer in astrophysics who is considered a key figure in the development of the Vatican Observatory, wrote that,

Definitely we are facing a climate change, due to human activity such as deforestation and the introduction of artificial sources of heat [i.e. burning fuels]. 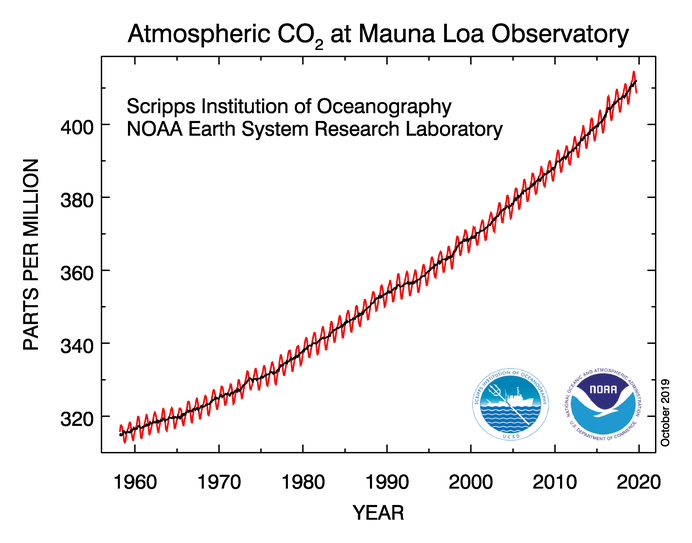 Carbon Dioxide concentration in Earth’s atmosphere as measured in Hawaii.

The theory makes sense, but I have discussed in previous posts how a resident of Kentucky (click here) or Wisconsin (click here) might have grounds for skepticism about any claimed warming.  What is more, science can be a tricky business.  When the Vatican rejected the Copernican theory, it could certainly cite powerful scientific arguments, and prominent scientific authority (i.e. Tycho Brahe) against any motion of the Earth.  No doubt the Vatican folks from that time who were involved would be rather surprised to see how things turned out.  The science of Earth’s motion changed.  As Br. Guy often points out in talks, what is in science books changes: a biology textbook from a century ago will not serve you so well today.

And yet, our Kentucky skeptic has seen high 90s in October.  Recall the post from last week on Pascal’s Wager.  Blaise Pascal, a man of solid faith, is considered a sort of founding figure of decision theory—the science of how to weigh risks and rewards in order to make rational choices.  In Pascal’s case, the choice was whether or not to believe that God exists.  Our Kentucky skeptic might consider a sort of Pascal’s Wager on whether or not to believe that climate change exists.  Pascal argued that to decide to believe that God exists is a low-risk, high-reward proposition.  To our skeptic, to choose to believe that climate change exists is probably not such an easy choice.

Suppose our Kentucky skeptic believes authority, believes the climate scientists, and accepts the existence of climate change.  Thus, despite those eagles soaring in Kentucky’s own perfect October skies, our Kentucky skeptic accepts the idea of impending environmental apocalypse.  Suppose furthermore that our skeptic endorses actions to mitigate climate change, actions that in fact do hurt Kentuckians economically.  And suppose the authorities turn out to be wrong.  Will the judgment of our skeptic’s children and grandchildren not be that our erstwhile skeptic was a fool for caving in to ‘the hype’ when our skeptic could see eagles soaring overhead in a perfect fall sky?

Now suppose our skeptic staunchly continues to reject the existence of climate change, despite authority, despite the scientists—and despite high 90s in October on our skeptic’s own home turf.  Suppose our skeptic cites the economy and the soaring eagles, and dismisses the soaring temperatures as a fluke—another bit of crazy Kentucky weather (they say that if you don’t like the weather in Kentucky, wait five minutes, and it will be something different).  But then, suppose that the next freak heat wave and drought hits, not in the fall, but in the heat of the summer.  Suppose the mid-summer high temperature records are shattered as thoroughly as the October records were shattered, and the drought is as long, or longer, than it was this fall.  If the temperature in the heat of the summer is continually breaking 110°F, and crops are failing, and animals dying, and water is severely rationed, and industry and the economy are severely curtailed, and the lush Kentucky landscape is brown and devastated, will the judgment of our skeptic’s children and grandchildren not be that our skeptic was a fool?—a fool who not only ignored authority, but who also ignored the personal experience of October 2019’s soaring temperatures?

This pair of eagles is just upriver from downtown Louisville: