The sun puts of 3.8×1026 Watts of power.  That is its luminosity: 380,000,000,000,000,000,000,000,000 Watts, or 380 septillion Watts.  As best science can tell, this power comes from nuclear fusion reactions occurring in the sun’s core.  These reactions are converting the sun’s mass into energy via E=mc2.  The sun devours billions of kilograms of mass every second.  If you read this blog regularly, you saw this all discussed—with math!—in my post from earlier this month (click here for it).

Since the Earth is small, and 93 million miles from the sun, we receive a minuscule fraction of that power.  Nevertheless, each square meter (an area the size of a large bath towel) of sun-facing surface on Earth receives over 1000 Watts of solar power.  “Sun-facing” means, of course, that the night side of Earth, for example, is not receiving any direct solar power.  Moreover, the effect of those solar Watts depends on many factors; consider the difference on a summer day between a freshly blacked asphalt surface and a nearby swatch of green grass.  But 1000+ Watts is enough to run a small hair dryer or room heater—from every square meter.  Earth may receive a minuscule fraction of the sun’s power, but seen on a human scale, that minuscule fraction is an incredible amount of power.

We humans have always figured out ways to use the sun’s power.  If you know where to look, you can find widespread ruins of an abandoned solar-power technology.  Where do you find such ruins?  In the U.S., you find them in older neighborhoods where the houses have some green space around them.  There you will see certain odd, ‘T’-shaped metal structures standing here and there.

These structures were once part of an apparatus that harnessed solar power to perform a highly energy-intensive task: the drying of wet clothes.  In its heyday, this technology was known as a “clothes line”.  Strong cords, or lines, were strung from one ‘T’ to another.  Wet clothes (and towels and sheets and other things that had been washed) were hung from these lines.  The wet items were usually attached by clip-like devices called “clothes pins”.

In Clarksville, Indiana, across the Ohio River from my hometown of Louisville, Kentucky, there is the Falls of the Ohio State Park.  In that park is a levee with a walking path on it that takes you right through one of these neighborhoods.  From atop the levee you can look down and see one after another of these abandoned clothesline ‘T’s.  They are utterly abandoned: walk the path whenever you wish; even on a hot, dry, sunny summer day; you will not see one of these ‘T’s being used for its intended purpose.

That is remarkable, because the clothesline is an elegant, effective, inexpensive, and “green” (that is, “climate-friendly”) technology.  By contrast, a clothes dryer is a big energy hog.  According to GE Appliances, which has a factory in Louisville, an electric clothes dryer uses about 5000 Watts of power—the equivalent of over 500 LED light bulbs.  On a good day a full ‘T’ of clothes lines can easily outpace a clothes dryer.  And it makes sense that the clotheslines would outpace the dryer, since the sun can deliver hundreds of Watts of power to each arm’s breadth of laundry hanging on the lines.

Solar power technology is often cited as a green energy source that will help humanity reduce greenhouse gas emissions and curb climate change—but not this solar power technology, obviously, or else these ‘T’s would not be abandoned.  That they are abandoned is really strange, because they are a solar technology that is so elegant, effective, inexpensive, accessible, and durable (after all, they still stand!). 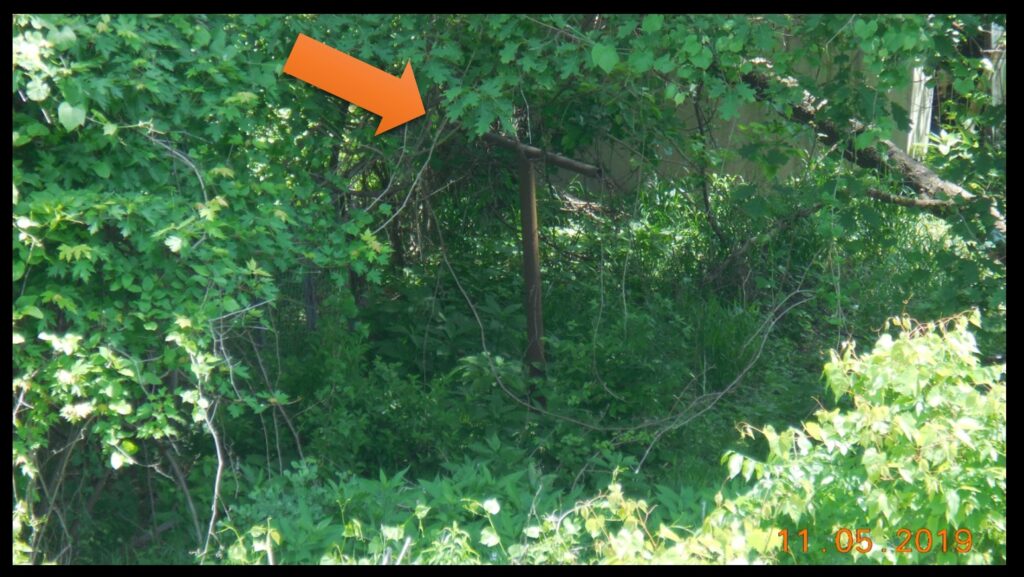 Perhaps the future will have houses that are equipped once again with these ‘T’-shaped structures that put some of the sun’s 380 septillion Watts of climate-friendly fusion power to work in the simplest possible manner.  On the other hand, maybe what the future holds is for there to be a 5000 Watt clothes dryer in every home on the planet, and clothesline ‘T’s abandoned and rusting the world over.