I haven’t been using Twitter very long. Twitter itself hasn’t been around for long, having been founded in 2006. It’s a very 21st-century medium of communication.

I was therefore surprised when I came across a familiar voice, tweeting from the 17th century.

Someone–it’s not clear who–is tweeting Johannes Kepler’s short book Somnium, his story about a fictional astronomer who is magically transported to the Moon. 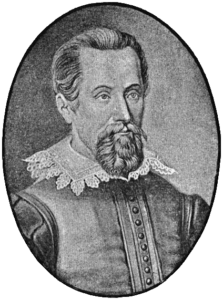 Somnium was originally written in Latin. The person behind @SomniumProject is making a new translation of the book into English. The Somnium (or Dream) has emerged in 140-character chunks, one sentence at a time, or sometimes just a sentence fragment, ever since 2011.

SomniumProject also passes along news about astronomy and the history of science. Sometimes weeks or months will go by between bursts of fresh translated passages. But gradually, Kepler’s story is emerging, imagining the sky as seen from the surface of the Moon.

Brief translated passages from Kepler’s lunar-voyage story Dream, presented in Twitter’s bottom-to-top style by @SomniumProject. “Volva” is the name lunar inhabitants give to Earth, hence Subvolvans are residents of the Moon’s near side. Our planet is always in their sky.

You can see all the tweets to date, sorted into proper order, on this Storify site.

The disadvantage—well, I guess there are quite a few disadvantages to reading a classic book a line at a time, over years—one disadvantage is that the footnotes are not (yet) available. As I wrote the other day, Kepler’s explanatory scientific footnotes are the best part. Our translator has hinted that the 15,000 words of footnotes will eventually be translated as well.

I like the idea of SomniumProject because it’s so eccentric. It may not be the ideal way to read the book, but over time the tweets have been bringing this pioneering work of imagination before the eyeballs of thousands.

Among all the other tweets flowing past, for just a moment, when a bit of Somnium shows up on screen, the reader’s own imagination might slip away to stand, alongside Kepler, looking up at the Earth.