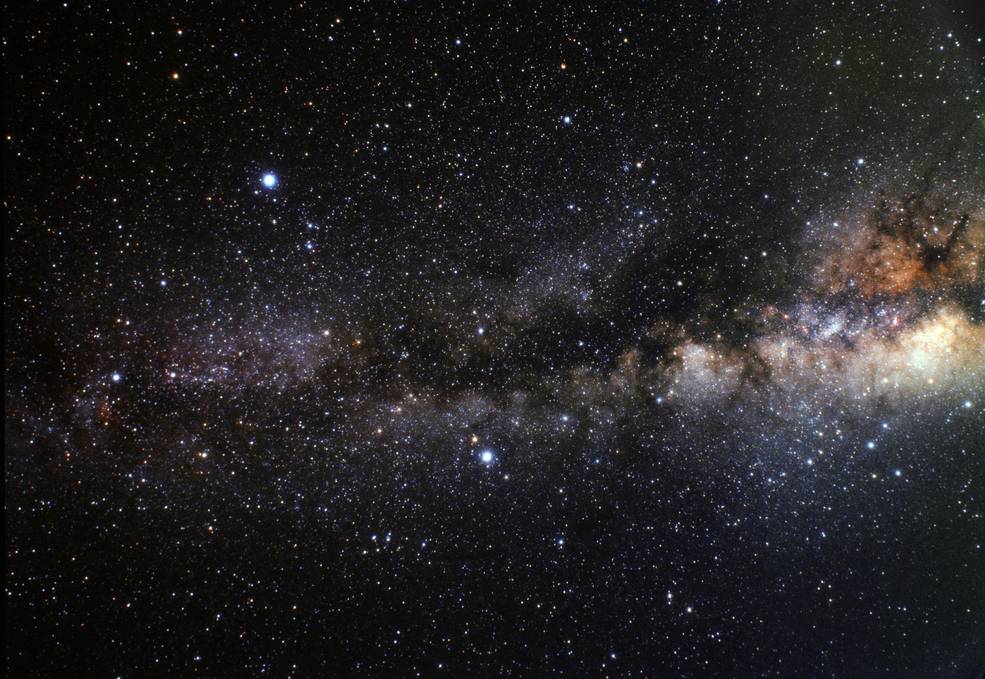 Thick clouds of dust, sometimes called the Dark Rift, block part of our view of the stars in the Milky Way’s disk. Image credit: A. Fujii

The sight of the Milky Way stretching overhead from a dark-sky location can be an awe-inspiring sight. The light from all those stars has traveled vast distances to reach Earth; some of it much further than others.

The speed of light in a vacuum is 299,792,458 meters/second – this is called a light-second. The Moon is 1.26 light-seconds away; two-way radio communications with Apollo astronauts on the Moon saw a slight delay due to light-speed issues. Robotic spacecraft orbiting other planets can see communications delays from several minutes to hours because of their distance.

The distance light travels in one year is called a light-year (about 6 trillion miles); light from the nearest star takes 4.22 years to travel to Earth. The farthest star visible to the naked eye is 16,308 light-years away. The Milky Way galaxy – the ocean of stars that our Sun swims in – is 100,000 light-years across. 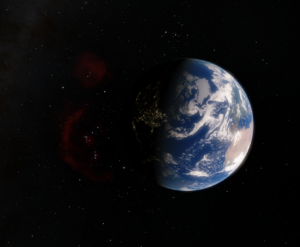 Earth from space with the Orion constellation in the background. Credit: Space Engine/Bob Trembley

When you look up into a night sky, you see the stars very far away. What you’re seeing is the light which has traveled from them to you.

It takes time for that light to travel here – so what you’re seeing is the stars as they were in the past – the amount of time it has taken their light to reach us.

The further away those stars are, the further back in time you are looking. 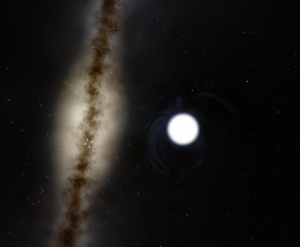 χ Aurigae, about 4000 light-years away, looking back at the Sun. Credit: Space Engine/Bob Trembley

…a being on a world orbiting that star looking at our Sun would see it (and Earth) as it was four thousand years ago.

Which of those two is “now?”

Space and time are linked together.

As you look out across space, you are looking back in time.

In a previous article, I talked about the immensity of the universe. The vast distances between stars and galaxies makes the light they emit a snapshot in history – a snapshot that is reaching us from all directions, and from vastly different spans of time.

Carl Sagan once said that “Telescopes are time machines;” when you look up into the night sky and understand what you are seeing, you become the time machine.