Recently  I was lamenting the fact that I had no actual workshops for Space Week 2020 because of Covid 19. However, just a few days ago I was asked what would I have to offer for Space Week 2021. The theme is Women in Space, so I had no problem coming up with several online scenarios. Here below is a revisit to  a series of workshops on Apollo 11. Next year will, of course, be populated with information about NASA’s ARTEMIS mission plans.

During Space Week 2018 Let’s Go To The Moon offered children the chance to draw some aspect of Apollo 11’s iconic mission. Almost 400 took part in various venues across the country. This, therefore, offered me an ideal opportunity to vary the subjects of the drawing challenges. During all workshops, I offer a demonstration drawing. This is done in seconds to help the children focus on the important aspects of drawing.

Each child has about 20 minutes to draw therefore focus is vital. Teaching them to observe the subject before starting is key. Asking the kids if they agree with me about recognisable shapes within for example Buzz Aldrin’s helmet. Specifically inviting them to look closely at where the shadows fall and the light lands. Requesting the children to be mindful of curves, rectangles, cylinders, cones and other shapes is very important.

Equally important is encouragment, so the children not to box themselves in with outlines. Better to try  make light ghost images first, work on detail later. Subsequently it really does not matter if you are drawing an apple or a spacecraft the same observation actions apply. Many children listened and produced better work because of small suggestions. It is often the small things in a drawing that makes it stand out.

At Axis Theatre Ballymun Dublin 120 children took part in two Space Week sessions. Buzz Aldrin’s helmet and the Saturn V rocket were the targets. It’s fantastic to have an enormous screen and big sound for the workshops. Interesting to see how a 20-foot high space helmet or rocket can transfer to 16X12 inch pieces of paper. Afterward all of these drawings were exhibited at school to spread the story and the pride.

Overall the workshops it was interesting to see how kids took on such complex challenges. One group was charged with drawing all three astronauts, Armstrong, Aldrin and Collins. It was doubtful that they had ever drawn a person before yet alone three people. Again using the actions of observing shapes, light and shadow some terrific efforts ensued.

In Newport National School 40 drawings of the iconic helmet were produced, some with great attention to detail.  Some days later the workshop visited Killeen National School in Louisburgh Mayo. There another 40 space week children became very familiar with the reflections and shadows within the visor of the second man to walk on the moon.

About 100 children attended the workshop in Dunboyne Library. Here at the top of the slide show are a few of the many drawings produced by three local 6th classes. Group 1 were challenged to draw Armstrong, Collins and Aldrin. The second group were challenged to draw Buzz Aldrin’s helmet with reflections. The final group of the day were challenged to draw the Command Module, Service Module and Eagle lander. In particular, I loved the drawings of the three men, some animated, some hilarious all wonderful.

To sum up, all of the teachers were proud and frequently surprised by the quality of the drawings produced. Each child was given one of my A4 information sheets about the mission. 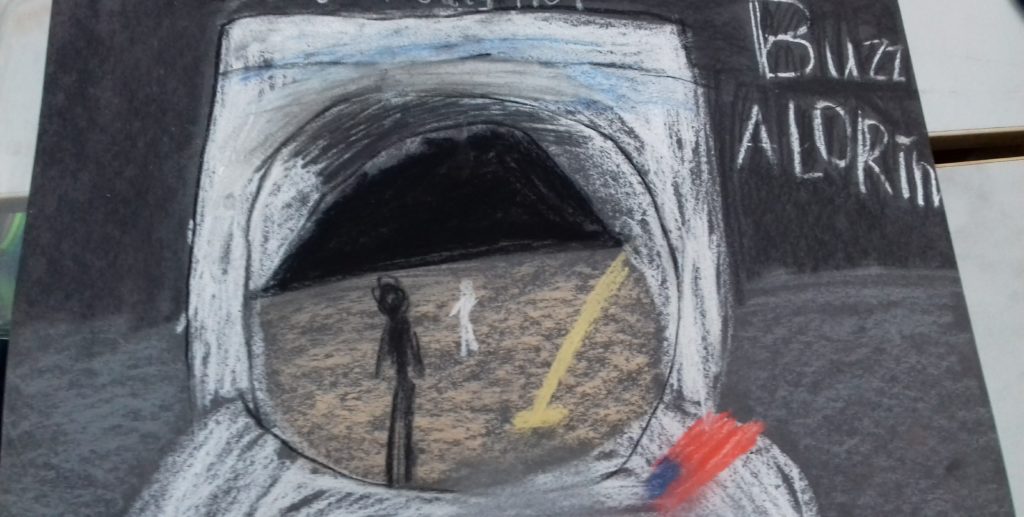 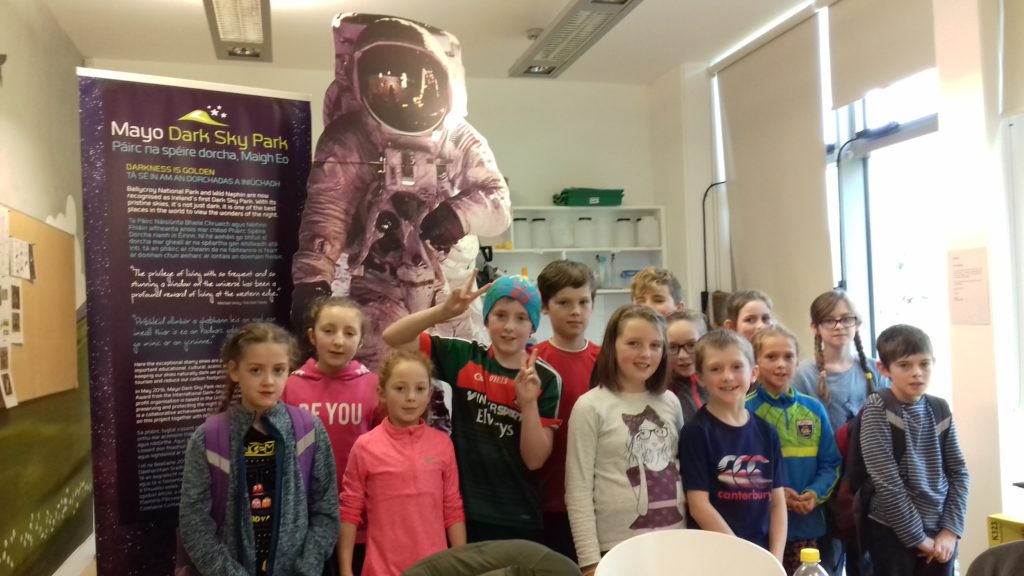 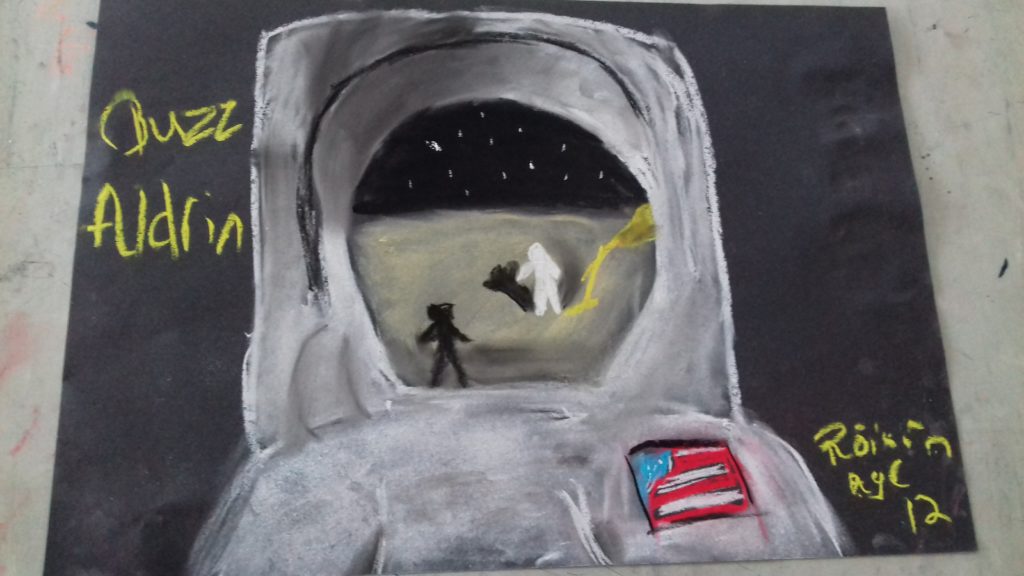 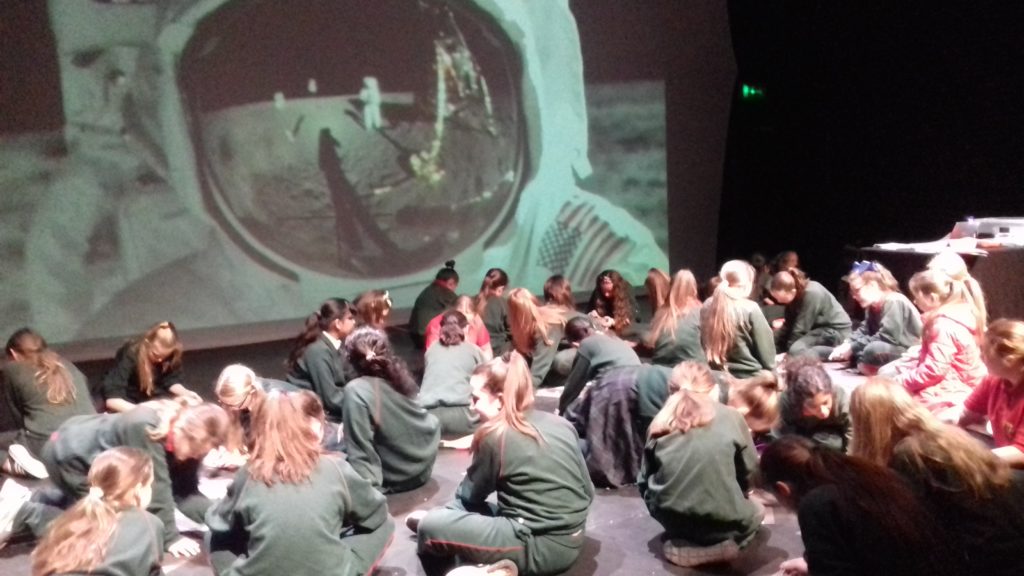 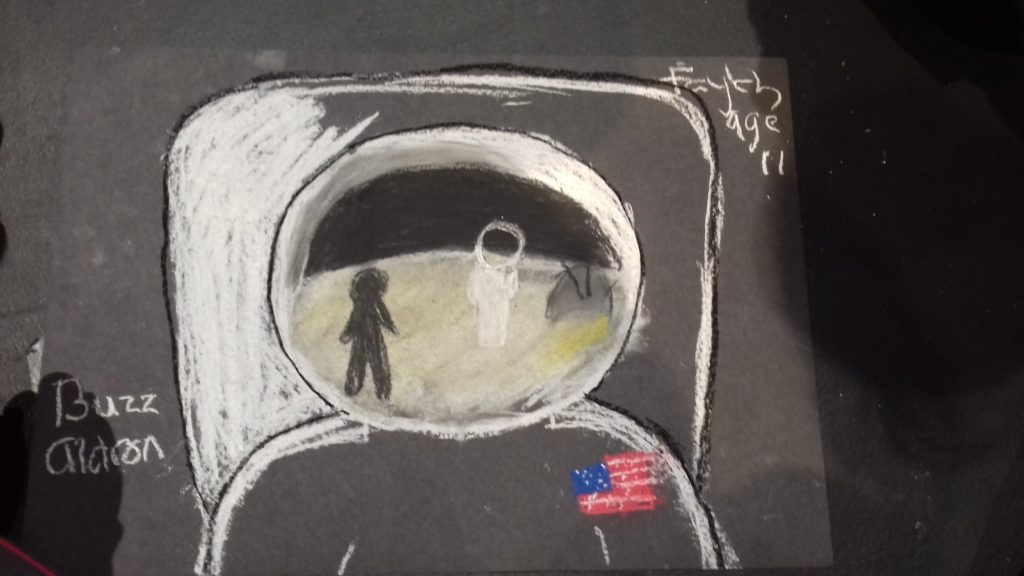 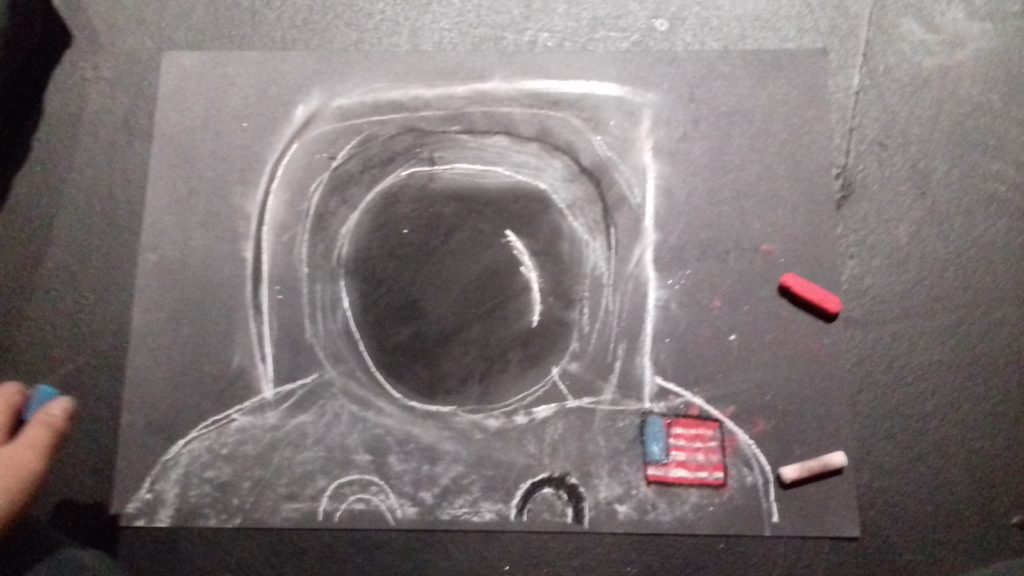 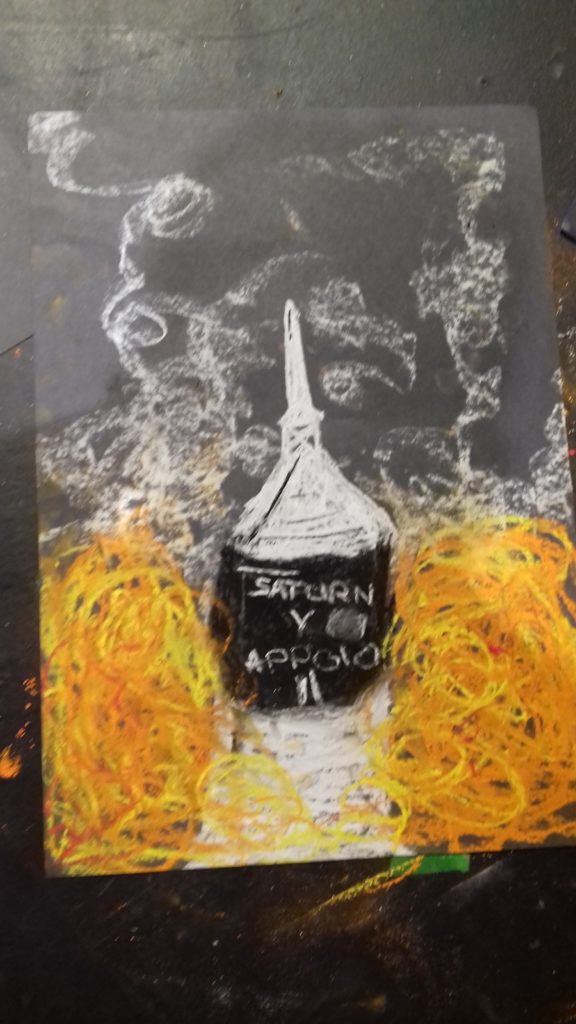 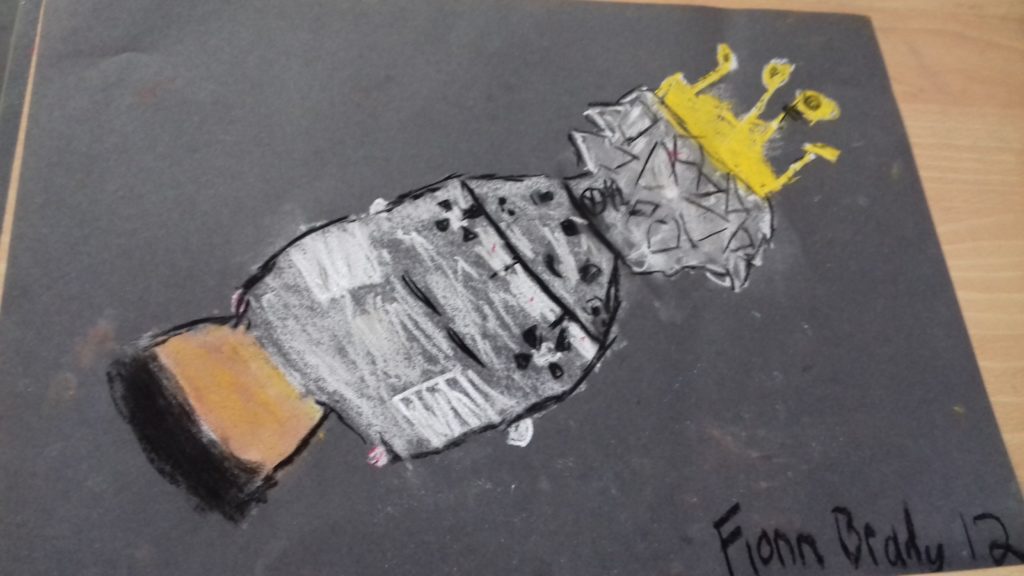 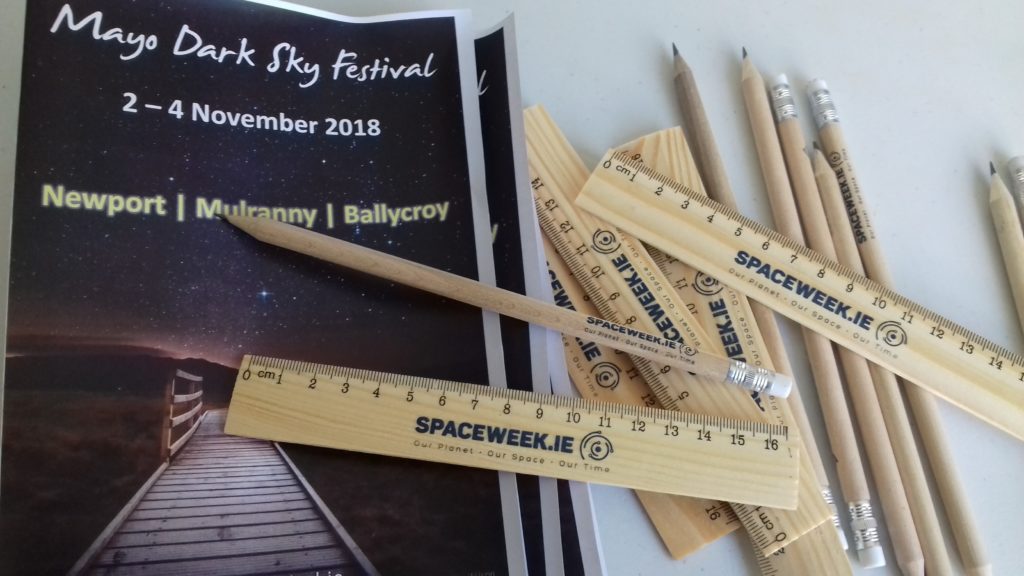 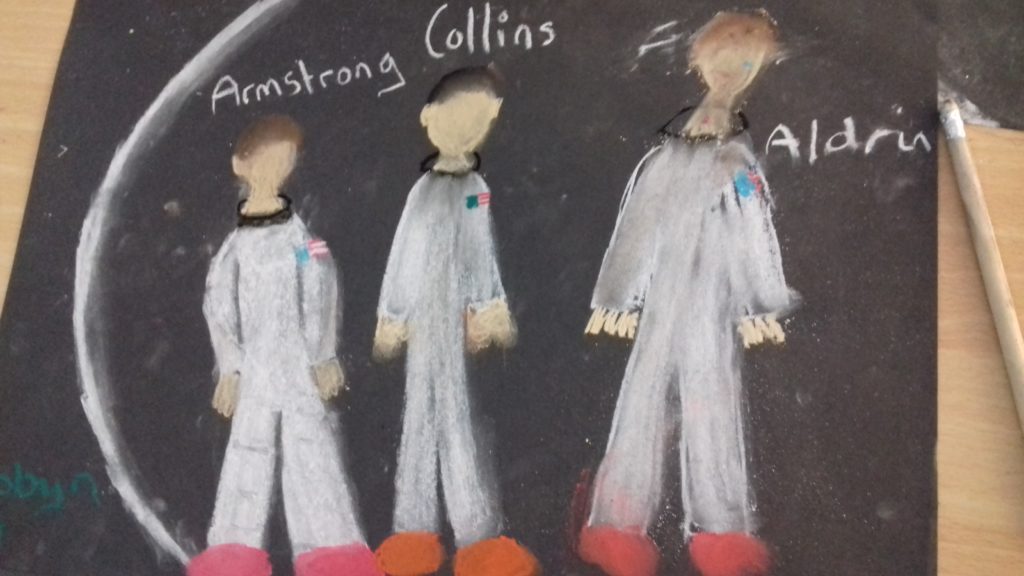 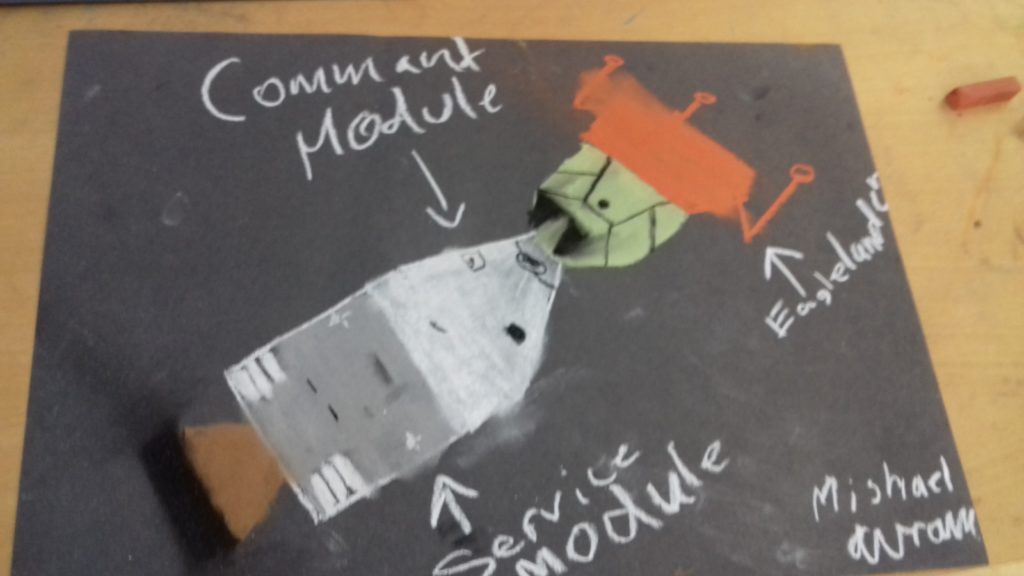 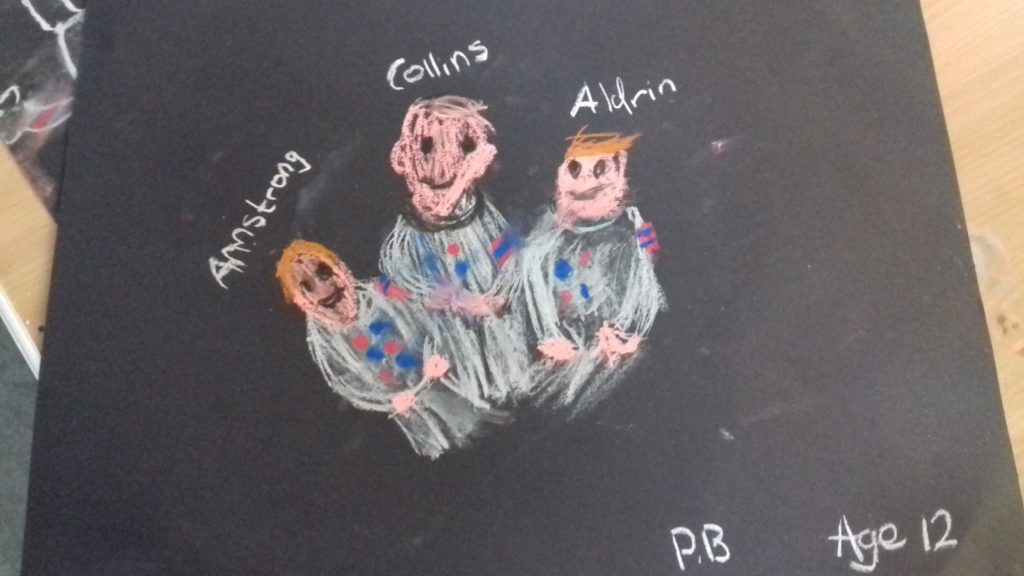 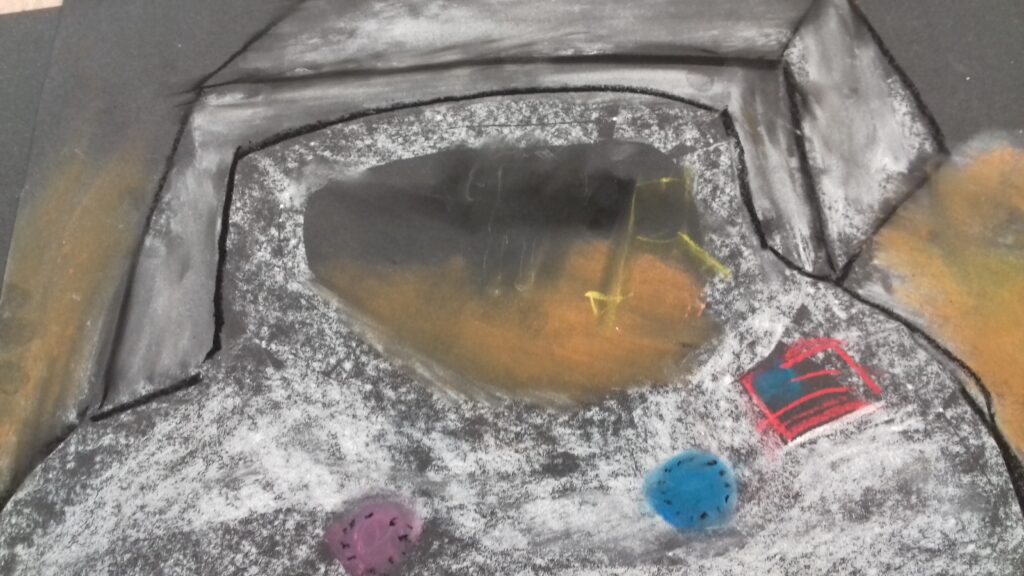