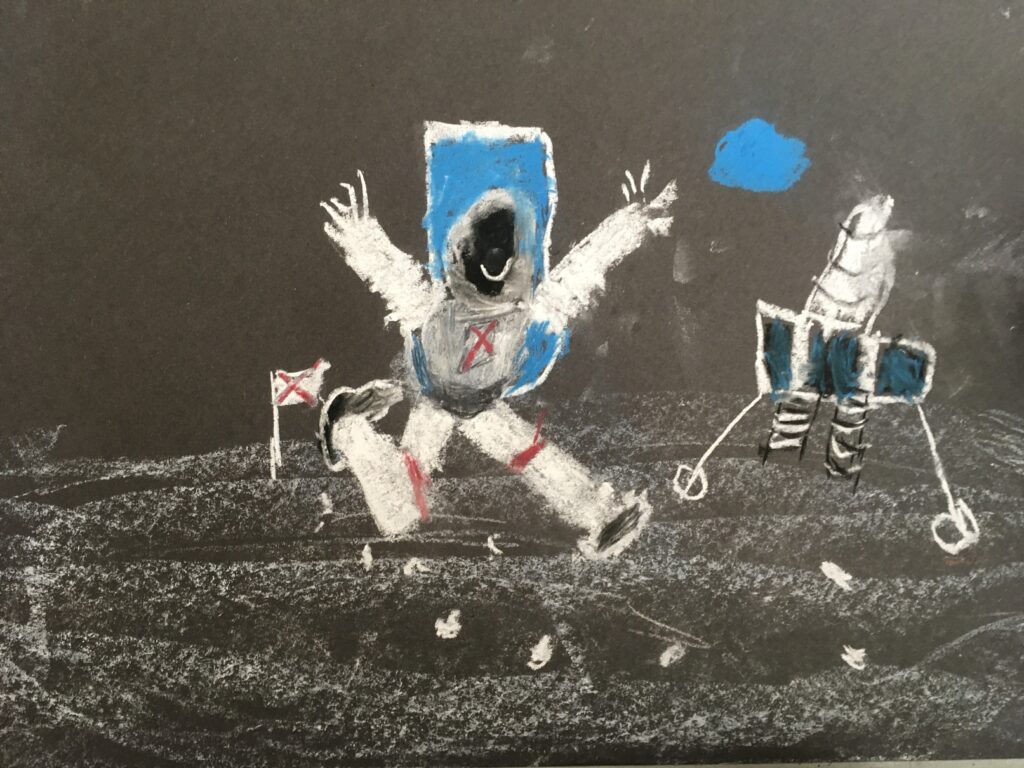 My offering for Space Week was a zoom presentation coupled with a drawing video. The theme was Women in Space. Therefore the talk brought the kids from women exploring the stars in Nineteenth-century Ireland right up to the forthcoming Artemis missions to the Moon, Mars and Beyond.

Also brought to their attention in my space week talk, were the hidden figures of Mary Jackson, Dorothy Vaughan, and Kathrine Johnson. Speaking about the work of Christina Christoforetti in space exploration got me excited. I mentioned her book Diary of an Apprentice Astronaut. The opening chapter explains her experience of coming back to Earth from the International Space Station. What she saw, how she felt in those moments descending through our atmosphere are put over in a way that places the reader inside the spacecraft. This book was just one of the reads I recommended during the sessions.

A promise of adventures to come

My aim for the workshop was to get the kids to see themselves as having the potential to land on the moon. Astronauts are always somebody else, a person from another country other than Ireland. So let us bust open that perception and open up that possibility with a drawing. Hence the above drawing by a young child from Kildare.

Women in space were the theme, so as my audience was both boys and girls, a slightly broader view was required. We imagined that women from Co Kildare would land on the moon in the future. My instructions were to add your name if you were a girl or your mams name or sisters name if you were a boy.

The children did the drawings in real-time during the session. This activity surprised me as I had no way to test how the workshop would go in practice. The kids came up to the camera in the classroom to show me how far their drawings were progressing. Seeing their work was such fun and informative for me hundreds of miles away.

In my video, I wanted to offer a moving astronaut or at least the look of joyous energy resulting from landing on the moon. Kids typically draw outlines for figures locking their drawings from the start. I wanted them to try using shapes and curves to achieve the goal. By drawing like this, they seemed to gain more energy and life in their work.

Also, in the drawing, the county’s flag on the moon would help get the kids to see themselves doing something to be proud of in the future. Some teachers put all the drawings produced on display in the school corridors. I was delighted with that extra positivity.

I told the kids that I saw Apollo 11 land on the moon in July 1969. The Apollo landing broadcast arrived on a miserable black and white TV. A dotty picture that sometimes rolled out of control till someone adjusted the television. In the next decade or so, I told them they would see a woman and a man land of the moon in their HD televisions with perfect images and great sound. Artemis was news to them, but I hope it will be even half as inspiring as Apollo was for me.

Here is my video for Space Week