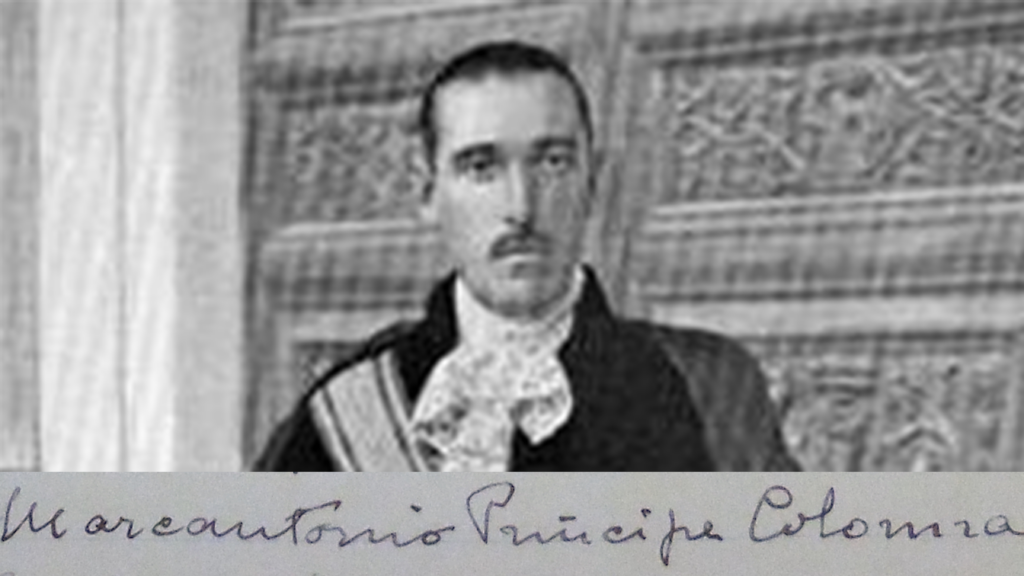 The Vatican Observatory has hosted thousands of visitors over the years. Among those who have signed our guest book, one can find Popes, Nobel laureates, authors, astronauts, and saints. Today we mark the 100th blog post from this series. Our entry is from November 20, 1935, when Prince Marcantonio Colonna made a visit.

Marcantonio VII Colonna (1881-1947) was accompanied on the visit by Fr. Francesco Moretti SJ, for whom I have no further information.

Coming from a very prominent family of Italian nobility, Colonna was prince of Avenna and Prince of Sonnino. He held a number of other noble titles, such as Duke of Marino and of Tursi; Marquis of Patrica, of Giuliana, and of Cave; Count of Ceccano; Baron of Santa Caterina; and Lord of Marino.

He was also one of the last prince attendants to the Papal throne.

The Colonna family was very influential in the history of Rome and its outlying regions, particularly in the Castelli Romani (of which Castel Gandolfo is a part). For instance, one can see the family crest with its symbol of a column prominently featured in the nearby town of Genzano.

Now that this series has reached 100 posts, I thought this might be an opportune time to reflect back on the Specola Guestbook project.

This whole project began a few years ago innocently enough. My office at the Vatican Observatory happens to be located adjacent to the part of the corridor where the guestbook is housed. I would often take a break from more pressing work to leaf through the pages of the book. A few names stood out to me, people whom I recognized from astronomy history, pop culture, or elsewhere, and I then show them off to other members of the Observatory.

One day, Brother Guy was my captive audience to hear about my latest discoveries from the book. He remarked that I should document these finds and write about them. From that, the Specola Guestbook column was born.

I started with the first page, each name receiving a google search and an entry in a spreadsheet. If I found any information about the person, the spreadsheet included links to relevant web pages, dates of birth and death, and any noteworthy facts about the person’s life.

For the Specola Guestbook column in the blog, I selected those with sufficient information to write something. This means a number of people got skipped, though perhaps not as many as you might think. I then did a deeper search to pull up as much information as I possibly could about each.

For me, the project is captivating, because I have learned and continue to learn about some fascinating characters that I would have never otherwise encountered. And they all have one thing in common: they have made a visit to the Vatican Observatory at some point in the past. They were actually here, and all wrote in the book with their own hand.

The catalog so far has reached April of 1937, so there is still about 85 years left to go.

The difference is striking between the people who came to visit before 1935, a period when the observatory was in the walls of Vatican City, and after 1935, when the observatory moved out to Castel Gandolfo. Before the move, visitors were almost exclusively astronomers or scientists in related fields, and a very high percentage of them showed up easily in an internet search. After the move, the number of non-astronomer visitors skyrocketed.

There are many reasons that this might be the case. One obvious possibility is accessibility: before, one would have to gain access to Vatican City itself before making your way to the back wall to find the observatory. Thus, it would have only attracted our astronomical and scientific colleagues who came specifically to visit with the scientists of the observatory.

After the move, the observatory might make an attractive excuse to make a day trip outside of Rome to the beautiful scenery of the Castelli Romani. Thus, we see more Jesuits from Rome visiting, as well as other large groups of various types. There are also many more prominent members of the Vatican hierarchy that took the opportunity to visit. I still see a number of astronomers and scientists who have signed the book, but I have to wade through sometimes dozens of other obscure names before uncovering the next gem.

Now that we have reached post number 100, I’m going to take a short break. (Actually, I’ll be traveling for the first time since the pandemic struck.) Rest assured, the project still has a long way to go and I don’t intend to stop until I bring it up to date.