Since its founding in 1891, many people have passed through the doors of the Vatican Observatory.  A quick perusal of our guestbook reveals several Names, including Popes, Nobel laureates, astronauts, actors, and saints. Today’s guestbook entry is from April 12, 1923, when Walter Cady made a visit with his son Willoughby. 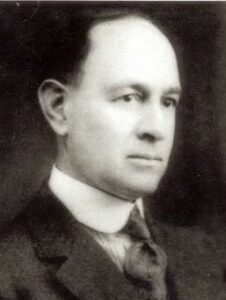 He was an electrical engineer and physicist.  He was a professor oat Wesleyan University in Middletown CT.

In 1921, he developed the first quartz crystal oscillator, a piezoelectric device that became the timekeeping basis for quartz clocks and watches.

As part of his research, he worked to develop international frequency standards.

What was he doing in Rome in 1923?  That year, he was comparing the frequency standards of various countries: England, France, Italy, and the USA.  This apparently involved travel to the respective countries.

In 1932 he served as president of the Institute of Radio Engineers.

He invented several devices related to piezoelectric oscillators, resulting in more than 50 patents.

Walter was accompanied by his son, Willoughby Miller Cady (1907-1953).  The young man would later earn a PhD in physics from Harvard University.

Willoughby was the head of physics at the Naval Ordnance Testing Station from 1946-1949, and then became head of the fundamental development group at the North American Aviation Corp. until his death in 1953.